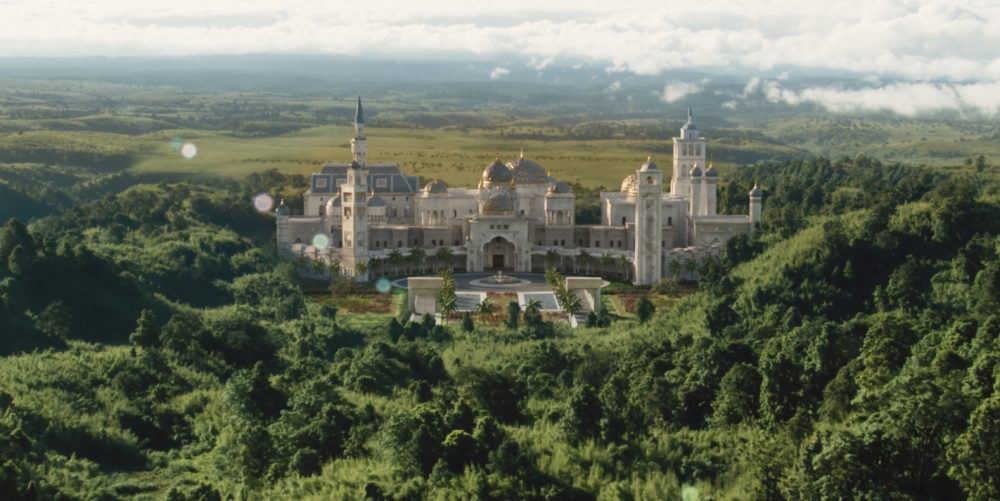 Eddie Murphy’s return as Prince Akeem Joffer in “Coming 2 America” ​​(now airing on Prime Video) brings the comedy franchise back to the fictional Zamunda, home to the royal family and their future heir.

Much of the Zamunda setting was recreated in Georgia, and the palatial palace was brought to life courtesy of rapper Rick Ross, who opened the doors of his property outside Atlanta to the film’s production team.

Says production designer Jefferson Sage: “Our big problem was, where did we find a house that had the scale of possibilities for a very luxurious palace?”

Sage and his team explored multiple locations before concentrating on the Ross estate, which would serve as the bones of the lush royal palace.

The 45,000-square-foot mansion in Fayetteville, Georgia sits on 235 acres and was previously owned by boxer Evander Holyfield. With 12 bedrooms and a 100-seat dining room, he had the scale manager Craig Brewer and Sage were looking for.

“That entry hall with a large two-story interior and a two-story staircase was perfect,” says Sage. “Outside of that, there were two beautiful large rooms with giant windows and 18-foot ceilings. We use five key spaces that we turn into Zamunda. “

Those spaces were converted for the film’s main sets, including the King’s bedroom and dining room. The main bedroom in the palace was Ross’s. The rapper says that 1988’s “Coming to America” ​​may be his favorite movie of all time and that he loved seeing Eddie Murphy and Arsenio Hall walking around his property.

“They changed the wallpaper in the dining room, so I asked them to leave it there,” laughs Ross. “They also created that huge dining table for a 50-60 seat dining scene, and they left it for me as a gift. It’s huge “.

Set decorator Douglas A. Mowat deserves credit for enhancing Ross’s real-life rooms. To transform the master bedroom, he opted for the existing color, warm white, but incorporated blues and silvers to “make the room stand out and give it more dimension.” Mowat took the initiative by adding silver leaves to the canopy above the bed.

Sage made sure to honor the original film by keeping a similar color palette, “but we tweaked it a bit,” he says. “We took the bones from the original set with the idea that they would be renewed and updated regularly.”

Elsewhere, Sage built the ballroom and throne room on external soundstages, but the architecture of the mansion served as the basis for the design. “We did that so it always felt like the same building,” adds Sage.

The Ross Mansion had a white interior with a gold ceiling trim throughout, so when it came to those external decors, Sage accentuated and adorned the gold leaf throughout. “We use so much gold leaf that we buy the country’s supply for at least two months,” he says.

He relied on visual effects to enhance the silhouette of the film. During one sequence, a steeple bell rings, and although the actual stage was small, Brewer and Sage inserted the shot into a nose dive of the Zamundan palace and residence. “That was our time to sell the place as a bit of a fantasy and show where they live and bring out the fairy tale quality of it all,” says Sage.

Creating the iconic My-T-Sharp barbershop for a sequence was Sage’s favorite. He searched for all the information on the original set created by Richard Macdonald. He researched and studied the pictures on the wall, focusing on the signed photos of the baseball stars and boxers. Sage adds: “We did our best to find everything we could, and we got almost everything. The feeling of going back to that set is a link to the original and ties the two films together. “