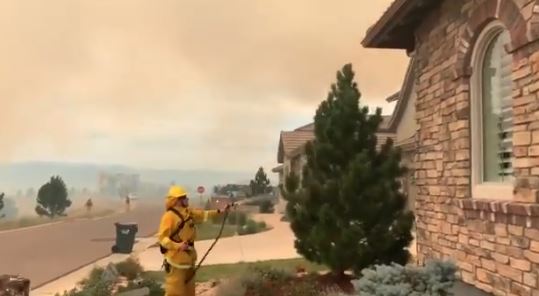 The BackCountry subdivision and nearby Highlands Ranch Law Enforcement Training Foundation are being evacuated, according to the Douglas County Sheriff’s Office. Evacuation is mandatory.

South Metro Fire Rescue responded to what is called the Chatridge 2 fire around 10 am Monday near the intersection of Chatridge Court and US 85 in unincorporated Douglas County.

By 12:20 pm, the fire had grown to at least 267 acres and was 60% contained. The fire presents a moderate risk of forward spread, according to firefighters.

Firefighters protected two houses in the area and are using helicopters to throw water on the fire. At least six planes also responded to the fire.

Around 1:40 pm, the South Metro Fire Rescue said in a tweet that the flames had burned on Skydance Drive in the Backcountry subdivision, but firefighters had been able to prevent the fire from entering the neighborhood.

No structures have been damaged and there have been no injuries, according to South Metro Fire.

People evacuating the Backcountry subdivision can go to ThunderRidge High School, 1991 W. Wildcat Reserve Parkway, in Highlands Ranch, and stay in their cars, according to the Douglas County Sheriff’s Office.

. # Chatridge2Fire Update – The flames have burned at Skydance Dr. in the Back Country Community, firefighters have prevented the spread of the fire to the neighborhood. No structures have been damaged or injuries have occurred. Firefighting efforts continue. pic.twitter.com/smkJMGhqlg