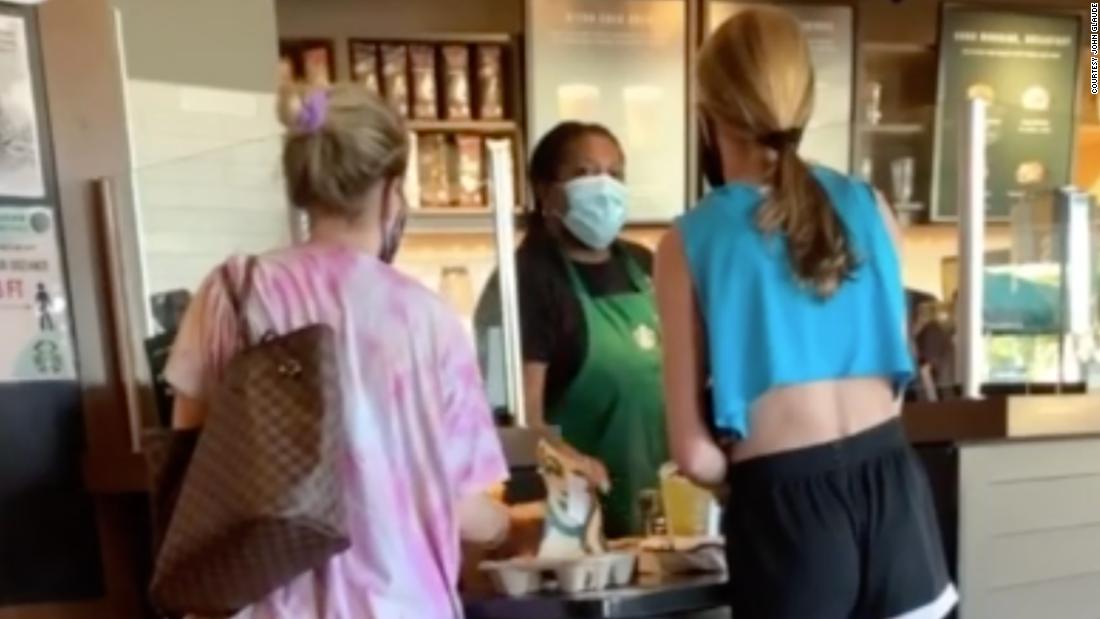 The encounter, which took place in the city of Santi, suburban San Diego on Sunday, escalated after the barista, 19-year-old Alex Bekom, asked the white client to put on his mask, which hung under his chin, Bekom told CNN.

Bekom said that at first, the woman asked to wear her mask properly, followed by ‘Trump 2020’.

Shortly afterwards, another customer from the store said that the woman allegedly told the barista that she did not have to wear a mask because she had an exception. “Barista said the exception is” not a thing, “according to the customer who was a witness to the exchange.

While the woman’s initial conversation with the barista was not recorded, the video of the incident begins as the woman recovers her mask and starts shouting angrily.

The woman said, “When you talk to me like this, I am not going to hear anything from you.” “I know it’s because you’re discriminating against me because I’m a Trump supporter,” she said.

Since then the video, which has gone viral on social media, has been trying to escalate the situation by giving a Starbucks employee his drink to the customer in peace. The customer, however, continued to rage.

“Then, next time you come, I will need to put on your mask, otherwise I cannot help you,” the barista said softly again.

The video shows the customer angrily beating up the employee when he exited the store shouting, “This is America and I don’t want to do what you say! Trump 2020! F ** k you!” F ** k Black Lives Case! ”

John Glaud, a customer who recorded the incident on his cell phone, told CNN that he thought about interfering.

“I really wished I would have stepped into it, but at the same time, I was like, I don’t want to pursue any situation and make it more,” Glad said.

After the encounter, the barista shared a post on Facebook expressing disappointment that the woman screamed “F ** k Black Lives Matter.”

“WTF does BLM have to do with Kovid ?,” Barista said in the post.

CNN has attempted to identify and deliver the woman seen in the video. Local authorities are not sharing his name.

A Starbucks spokesperson told CNN that the woman’s rant was out of line and would not be tolerated. The company also said that it is actively conducting an investigation to determine the appropriate next steps.

“We expect our partners and customers to welcome the same atmosphere and this behavior is not welcome in our stores,” said Jori Mendes, Starbucks’ senior manager of corporate communications. “Our focus right now is providing assistance to our partner, who we feel has performed tremendously during a very difficult conversation.”

In July, Starbucks began requiring customers to wear face covers that cover the mouth and nose while visiting all company-owned café locations in the United States. Customers who are not properly covered for medical reasons or otherwise may place orders using alternative options such as mobile order pick-up, drive-through or delivery. The customer involved in the incident did not use those options, Mendes said.

A spokesman for the department said the San Diego Sheriff Department told CNN that they are not investigating the case because “the crime did not occur.”

A spokesman for the San Diego Sheriff’s Department said, “It’s frustrating and ugly to watch, but just f ** k BLM – unfortunately there is no penal code violation for that.” “Under California Penal Code 422.6, there was no risk of violence, just someone going on a sinister fare.”

“We were called to respond, both sides were spoken to, no one filed a report. The patron indicated he was sorry for his actions, the way he behaved, and apologized to Starbucks. Was going to make contact. No offense was committed, “he said. .

After reviewing footage of the incident posted on social media, the San Diego Police Department told CNN, it “clearly looks like a hate crime.”

However, since none of their officers were called and no police report was lodged, they are also not investigating further. The barista confirmed to CNN that he had not filed a complaint and did not intend to press charges against the woman.