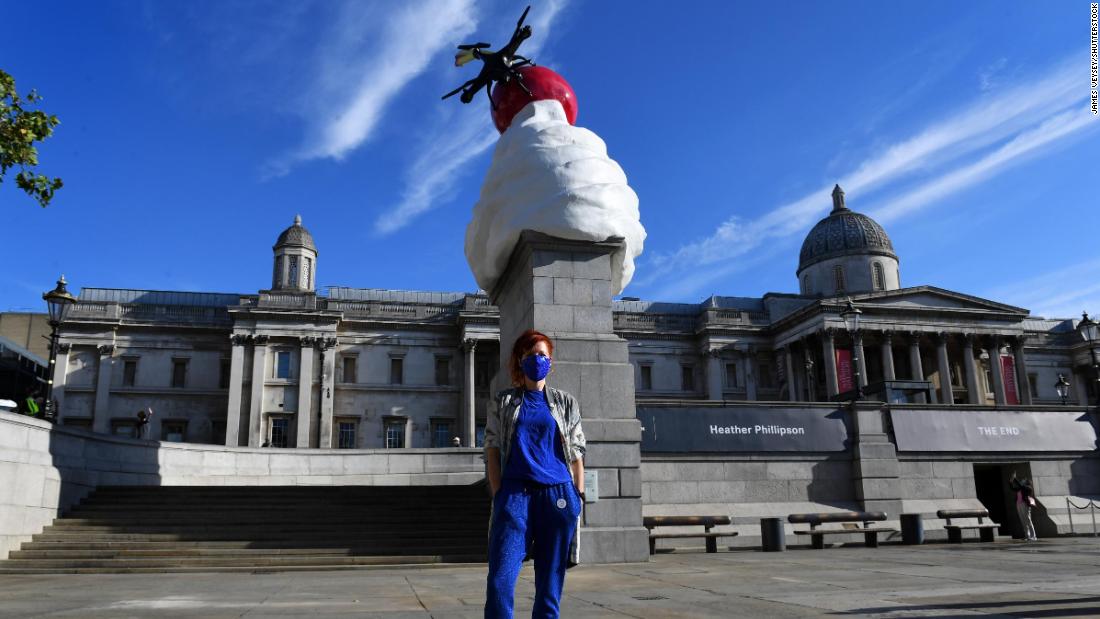 A giant vortex of whipped cream with a cherry, a fly and a drone has become the latest artwork to sit on the stage – the fourth plinth of Trafalgar Square for a constantly changing series of artifacts.

A bold and graphic installation titled “The End” was unveiled on Thursday. This is the 13th artwork to sit on the Fourth Plinth, as part of the ongoing commissioning of commissions after the original statue of William IV standing there, which was never completed.

According to a statement from the Mayor of London, the latest 9.4 m (30.8 ft) sculpture is the work of British artist Heather Phillipson, and will remain on the plinth until spring 2022.

It is the longest of 13 commissions in a series begun in 1998, after which the plinth was left vacant for more than 150 years. The winners are selected by a panel of prominent curators and artists, following public feedback.

“The End” is the longest sculpture ever erected on a plinth. Credit: Neil Hall / EPA-EFE / Shutterstock

The latest sculpture in Trafalgar Square, a tourist site that houses the National Gallery, and also a venue for public exhibits over the years, “suggests both exasperation and restlessness, making Trafalgar Square a place of celebration and protest Responds to, which is shared. Other forms of life, “according to the statement.

It is topped by a working drone that will stream live feeds.

The unveiling was delayed by four months due to a coronovirus epidemic. And while the giant dessert can be seen as a jubilant gesture, it also seems that the sweet treat may slowly melt away, as flies and drones measure their peak.

The fourth plinth is the “audacious and deceptive” work, according to Eko Eshun, chairman of the commissioning group.

“It expresses some of the horrific times we are currently living in, while standing in conversation with the artistic and social history of Trafalgar Square,” Eshun said.

“When Heather’s work was chosen two years ago we could never imagine the world we find ourselves in today, but we always knew that the taste of this sugar would foster interaction with the Dustopian flavor , ”Said London Deputy Mayor Justin Simmons for Culture and Creative. Industries, in a statement.

Phillips stated that his work is based on the political and physical aspects of class and plinth.

The artist said that he was honored that his works were now sitting in Trafalgar Square, noting that this “recurrent, and our sympathies with other lifestyles, is proportionate to the apocalypse.”

“Nelson Ship in a Bottle” was unveiled in 2010 by Yinka Shonibare. Credit: Jonathan Hordle / Shutterstock

“The End” will replace Michael Rakovit’s entertainment of Lamasu, a protective deity who was destroyed in 2015 by Islamic State militants near Mosul, Iraq.

Previous works that have been featured on the plinth include “Nelson’s Ship” by Yinka Shonibare, “Han / Cock” by Katrina Fritch, and a 2005 nude, pregnant, disabled woman statue of Mark Quinn.