WhatsApp has revealed how it will gradually paralyze the accounts of users who do not accept the imminent changes to the platform’s privacy policy, which will take effect on May 15. 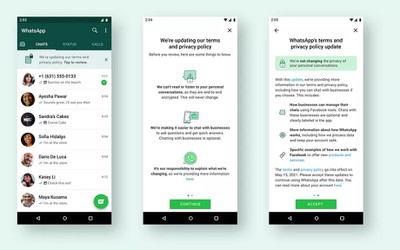 According to an email seen by TechCrunch To one of its business partners, WhatsApp said it will “slowly ask” users who have not yet agreed to the policy changes to comply with the new terms over the next few weeks, “to have full WhatsApp functionality” as of 15 th of May.

If they still do not accept the terms, “for a short time, these users will be able to receive calls and notifications, but they will not be able to read or send messages from the application,” the company added in the note.

The company confirmed TechCrunch that the note accurately characterizes your plan and that the “short time” will last a few weeks. WhatsApp’s policy for inactive users states that accounts “are generally deleted after 120 days of inactivity.”

WhatsApp first announced its new terms of use early last month, and many users interpreted the changes at the time to mean that the platform would share its messages with parent company Facebook.

In fact, private messages between users will remain end-to-end encrypted, so that only conversation participants will be able to access them. However, WhatsApp also allows users to send messages to businesses, and the same protections will not apply to those messages. Commercial message data may be used for commercial purposes, such as targeting Facebook ads, and some data will be stored on Facebook servers.

The misperception sparked a backlash among users of the Facebook-owned platform, prompting an exodus to rival messaging apps like Telegram and Signal, which were quick to exploit the situation by persuading former users with more chat features. conventional.

Since then, WhatsApp has used in-app status updates to clarify that the update does not affect data sharing with Facebook in terms of user chats or profile information, and the new terms apply to those who use the chat feature. of business.

In the weeks leading up to May, WhatsApp will begin to display a small in-app banner (pictured above) that users can tap to revisit privacy policies.

Tapping the banner will display a more detailed summary of the changes, including more details on how WhatsApp works with Facebook. The Facebook-owned company says it will eventually remind users to read the new policy and agree to it to continue using the app.