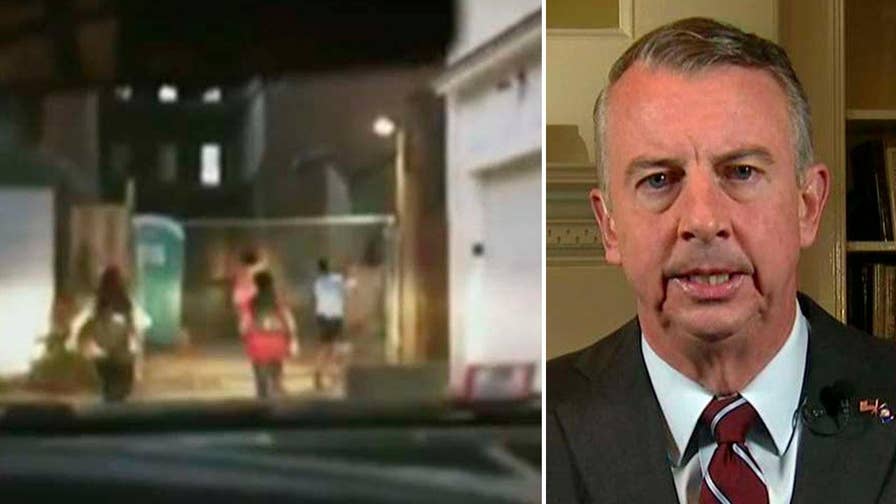 Democratic candidate for Virginia governor Ralph Northam is not distancing himself from the controversial ad suggesting supporters of Republican candidate Ed Gillespie are seen as Confederates who attack minority children.

The new opposition ad titled “American Nightmare” was released Monday by Democratic group Latino Victory Fund (LVF) and is scheduled to run through Election Day. The opposition ad shows minority children seemingly being chased by a driver in a pickup truck, decked out with a Confederate flag, a “Gillespie for governor” bumper sticker and a “Don’t tread on me” license plate.

The driver makes his way toward the scared children who shout, “Run! Run! Run!” when they see the truck. The ad concludes with a scene of a Charlottesville-like rally, with a  narrator asking: “Is this what Donald Trump and Ed Gillespie mean by the ‘American Dream?’”

Northam’s campaign told Fox News Tuesday that the ad was “not shocking” based on Gillespie’s campaign.

“Independent groups are denouncing Ed Gillespie because he has run the most divisive, fear-mongering campaign in modern history,” Northam campaign spokeswoman Ofirah Yheskel said in a statement to Fox News. “It is not shocking that communities of color are scared of what his Trump-like policy positions mean for them.”

But Gillespie said the ad was “an attack on” his “supporters,” whom

he calls “good decent hardworking Virginians who love their neighbors.”

VIRGINIA GOVERNOR RACE: WHO ARE ED GILLESPIE AND RALPH NORTHAM?

“The fact is, whether you disagree with people or not, in Virginia, we respect civil discourse and this is a new low in politics here. It’s a sad day,” Gillespie said on “Fox & Friends” Tuesday. “I was glad when a couple of the Democratic members of our House Delegates yesterday condemned the ad, but outrageously my opponent has embraced it, and it reveals a disdain not just for more supporters but for all Virginians, frankly, who want to have a discussion about issues and policies in this election that I’ve been focused on.”

Gillespie added: “They [Northam campaign] don’t want to debate the issues, and instead of debating the issues, they just demonize, they vilify, they marginalize anyone who disagrees with them.”

In a statement to Fox News, Gillespie’s campaign manager Chris Leavitt called the latest ad part of “a desperate smear campaign” against Gillespie.

“This is no an attack on Ed Gillespie anymore. This is an all-out attack on the people of Virginia,” Leavitt told Fox News. “This latest ad gives us a clear indication of just what Ralph Northam and his national Democratic allies think of all of us, and it’s sickening.”

The LVF ad is not the only one drawing significant criticism in this gubernatorial race.

Northam’s campaign came under fire after a Democratic mailer showing Gillespie and Trump, along with a photo of white nationalists carrying torches in another Charlottesville-like scene. The mailer encourages voters to “stand up to hate.”

Northam has stood by the mailer and slammed Gillespie for not denouncing the president “for not calling these white supremacists out for who they are.”

“Because the message is that we live in a very diverse society. That means that we need to be inclusive,” Northam said, according to the Richmond Times-Dispatch.

“The Lieutenant Governor [Northam] was roundly rebuked for exploiting imagery from the tragedy of Charlottesville for political points,” Leavitt said. “Now his allies have reached a new low with a disgusting, vile television ad seeking to instill fear in our children with that same imagery.”

Gillespie has also been criticized for ads that attempt to tie Northam to the MS-13 gang. One ad accuses Northam of being “weak” on combating the gang.

Northam, who is currently the lieutenant governor of Virginia, has had a star-studded roster of Democratic guests on the campaign trail, including former President Barack Obama, former Vice President Joe Biden, and a fundraiser in New York earlier this month headlined by Hillary Clinton.

Gillespie, on the other hand, has had Vice President Pence with him on the campaign trail, and a fundraiser hosted by President George W. Bush. Gillespie has been endorsed by President Trump, who repeatedly expresses his support for the Republican candidate on Twitter.