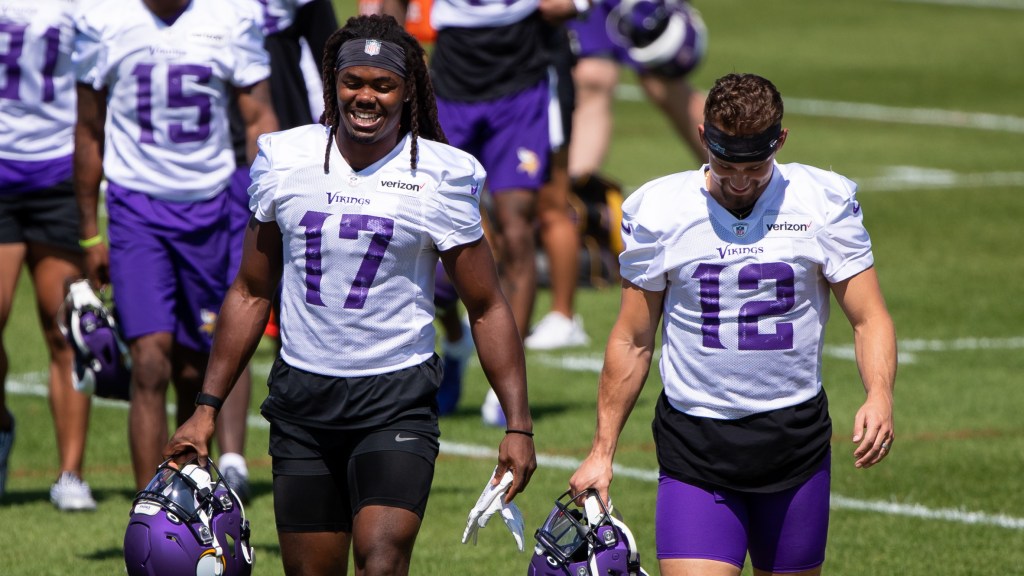 Minnesota cut its roster to 53 on Saturday, then signed most of its practice squad on Sunday. On Monday, the Vikings released their first unofficial depth chart of the season, giving fans and analysts an insight into how the team could line up against the Packers in 1 week.

There was not much surprise on the depth chart in Minnesota. Dakota Dozier is the starting left guard, which should come as no surprise after Avinte Collins was bitten, then signed to the practice squad. Also, there were not a lot of new starts on the offensive depth chart.

However, depending on how the team listed the start and backup, some interesting things shine. How will the Vikings be on the defensive line, at defensive backs and at wide receivers?

Here are some major takeaways:

Wide receiver BC Johnson was clearly No. 2 in training camp, and the unofficial depth chart probably relieved some doubt as to whether this was true or not.

Johnson was listed as a starter over Justin Jefferson. Adam Thielen and Johnson were the two starters, with the rest of the wideout group listed under backup.

While it would be good for Jefferson, with a wideout drafted in the first round to start immediately, the situation is not critical.

This is not a single crazy one. Rudolph has been the Vikings’ mainstay No. 1 option at the tight end for a long time.

There was a chance that Irv Smith Jr. could usurp him this year – and it could still happen – but it doesn’t seem as if the unofficial depth chart has happened yet.

Ifeadi Odenigbo is listed on the defensive end for now

This offseason, Ifaidi Odenagbo, was the presumed starter on the defensive end, before acquiring Yannick Ngakoue via trade from the team.

There was some speculation that Odenagbo might move to a three-technique spot to get more playing time. He has played sparingly in the past, but the depth chart currently lists him as a defensive end. Of course he can still play defensive combat during the game if he is asked to do so.

Gladney was listed ahead of Dantler on the CB depth chart

Mississippi State Defensive Back Cameron Dantler (3) is based on a play against Arkansas during the NCA college football game, APA (AP Photo / Michael Woods) ORG XMIT: ARWW 101 on Saturday, November 2, 2019 in Fayetteville, Ark.

Cameron Danstler was a player who received much praise for his performance during training camp.

But the depth chart that the Vikings have released is their fourth option. Mike Huse and Holton Hill are two starts. Then, Jeff Gladney is ahead of Dentzler on the list of backups. The Vikings corner, which the Vikings often use, was not specifically listed.

KJ Osborne is the No. 1 choice in kick and punt returner

KJ Osborne appeared to have emerged as the No. 1 returner during training camp. Based on the depth chart of the Vikings released, it appears. Ameer Abdullah is listed as the backup for the kick returner. They could always use both players. Beeb and Hugh were backups for the punt returner.

Jump Rope Challenge is not going anywhere yet, will now be available “until further notice”