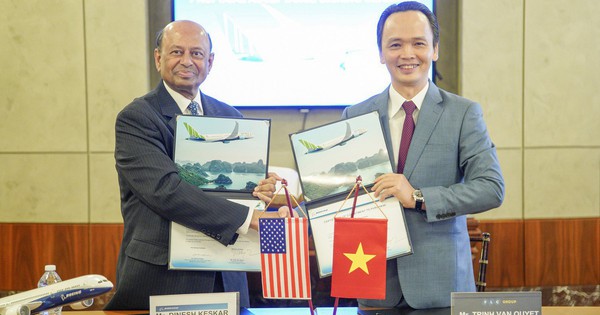 According to Reuters, the deal valued the listing up to $ 5.6 billion. Boeing 787-9 Dreamliner will join the fleet of Bamboo Airways to serve long haul routes to the international market, "said Yahoo, quoting FLC Group Chairman Trinh Van Quyet.

Mr. Trinh Van Quyet The long-term goal of Bamboo Airways is to connect Vietnam with key markets in Asia, Europe and North America, where the Boeing 787-9 Dreamliner will be an important role model for aircraft performance. active and economical. In addition, the high-end interior of the Dreamliner line is also in line with international standard amenities, becoming the first airline in Vietnam to offer first class Bamboo "We are honored to welcome Bamboo Airways to the 'family' of Boeing and hope Bamboo Airways will soon join the 787 Dreamliner family of airlines that are increasing in number in the world. "Boeing Dinesh Keskar, vice president of Asia-Pacific business and India, said. Dinesh Keskar has expressed confidence that the Boeing 787 will be a powerful supporter of Bamboo Airways' long-haul flights, laying the groundwork for its success in the coming years.

The signing ceremony took place at the American Chamber of Commerce in the witness of Deputy Prime Minister Vuong Dinh Hue. According to Boeing, the 787 Dreamliner is a completely new and "super-efficient" aircraft in the commercial airplane generation. Since 2011, more than 640 Dreamliners have taken off, serving 226 million passengers on 680 routes around the world, saving about 10 million tons of fuel.

Boeing 787-9 longer than 6 meters more than the 787-8, capable of carrying more passengers and goods over longer distances. The aircraft has two pathways with a capacity of 300 seats, which can fly long distances up to 14,140km.

The same day at the Trump International Hotel in Washington DC, the FLC Group held a promotional event and Large scale workshops aiming to share investment opportunities in potential sectors in Vietnam, as well as bringing the Group's products and services to the real estate, aviation and travel industry. – golf and high-tech agriculture to the US market. The event attracted more than 200 guests, including representatives from foreign agencies, financial institutions, fund management companies, investment funds, enterprises, potential investors, as well as other organizations. news agency, international press.

Child's wrong, Khaisilk not know how to handle

Powered by https://tech2.org/vietnam | Designed by TECH2
© Copyright 2021, All Rights Reserved