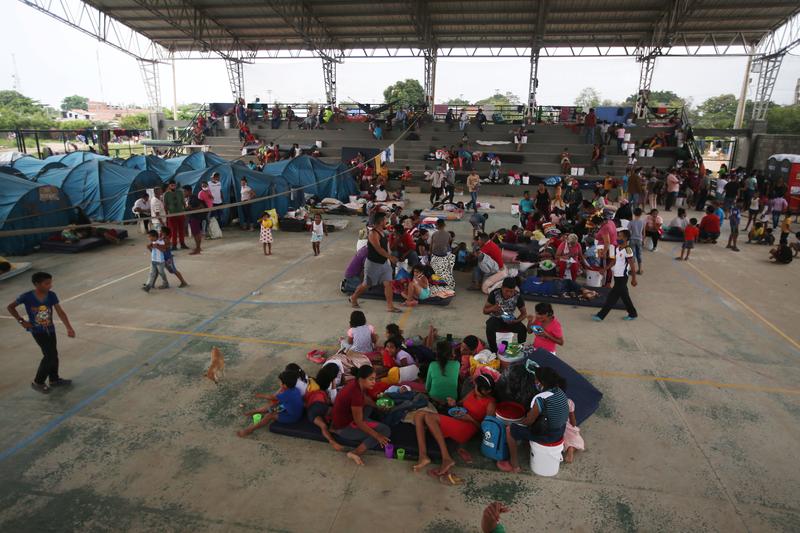 ARAUQUITA MUNICIPALITY, Colombia (Reuters) – Venezuelans fleeing to Colombia to escape clashes between the Venezuelan army and irregular armed groups have accused the soldiers of abuses, including the murder of civilians.

The flow of refugees, estimated at 4,000 by an official from the Colombian municipality of Arauquita, began on Sunday after the Bolivarian National Armed Forces of Venezuela (FANB) launched an offensive against illegal armed groups in La Victoria, one Venezuelan town on the other. side of the Arauca River from Arauquita.

Venezuela said it is investigating allegations that members of its armed forces committed abuses, such as detaining and killing civilians, as well as looting and burning homes.

“They raided our house and took everything from us. When they arrived they broke everything, the doors; they went in and took everything I had in the house, the workshop, “mechanic José Castillo, who arrived in Colombia with his pregnant wife and 12-year-old daughter, told Reuters.

“I couldn’t stay because they are killing people. They killed some neighbors and dressed them in uniforms of the Venezuelan army to pass them off as guerrillas, ”Castillo said.

Reuters was unable to independently verify Castillo’s allegations, nor those of other displaced Venezuelans who showed photos on their cellphones of dead people in camouflage uniforms and weapons next to their hands.

Dissidents from the demobilized Revolutionary Armed Forces of Colombia (FARC), who reject a 2016 peace agreement with the Colombian government, are the target of military operations, according to fleeing civilians.

But the victims were residents of La Victoria and its surroundings, they said.

Another 39 have been captured, it added in a statement.

“We must expel any group of any ideology, of any foreign nationality,” Padrino said. “We are obliged to expel them, whatever they are called.”

The charges against the Venezuelan military do not reflect its ethics, Padrino said.

The Venezuelan armed forces are obliged to defend the country from irregular groups, he said, adding that human rights will be respected and the facts will be investigated.

In a separate statement, the Venezuelan Defense Ministry accused the Colombian government and the United States Central Intelligence Agency of supporting foreign fighters.

The Colombian government and the CIA were not immediately available for comment.

Venezuela’s chief prosecutor, Tarek Saab, wrote in a series of Twitter messages that Venezuela is investigating events in La Victoria, to see if rights were violated.

Colombian President Iván Duque has accused the government of his Venezuelan counterpart Nicolás Maduro of harboring FARC dissidents and members of the National Liberation Army (ELN), something that the Caracas government denies.