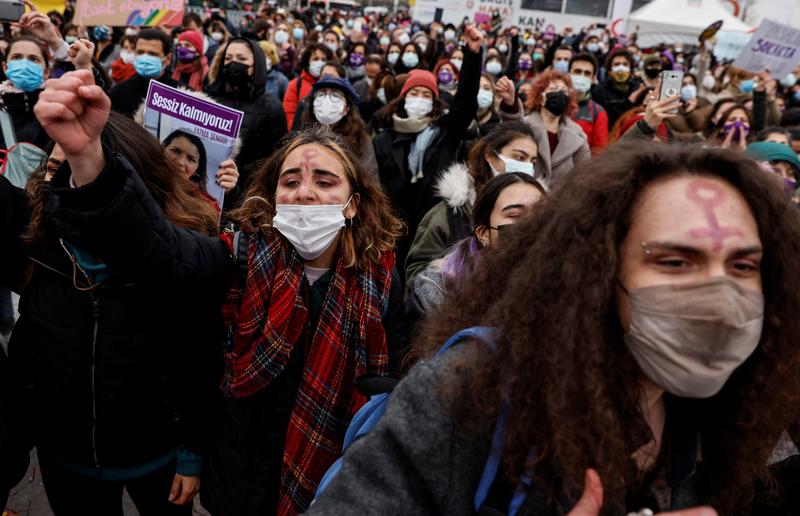 ISTANBUL (Reuters) – US and European leaders denounced what they called Turkey’s disconcerting and worrying decision to withdraw from an international agreement designed to protect women from violence, and urged President Tayyip Erdogan to reconsider.

Erdogan’s government withdrew on Saturday from the Istanbul Convention, which it signed in 2011 after it was forged in Turkey’s largest city. Turkey said that national laws, not external solutions, would protect women’s rights.

The Council of Europe agreement committed to preventing, prosecuting and eliminating domestic violence and promoting equality. Killings of women have increased in Turkey in recent years, and thousands of women protested the government’s move on Saturday in Istanbul and other cities.

The United States, Germany, France and the European Union responded with dismay, marking the second time in four days that European leaders have criticized Ankara on rights issues, after a Turkish prosecutor decided to shut down a pro-Kurdish political party.

US President Joe Biden said Turkey’s withdrawal from the accord was “deeply disappointing” and a step backward in efforts to end violence against women around the world.

“Around the world, we are seeing an increase in the number of incidents of domestic violence, including reports of an increase in femicides in Turkey,” Biden said in a statement Sunday. “Countries must work to strengthen and renew their commitments to end violence against women, not reject international treaties designed to protect women and hold abusers to account.”

EU foreign policy chief Josep Borrell said Saturday night that the decision was incomprehensible and “runs the risk of compromising the protection and fundamental rights of women and girls in Turkey (and) sends a message dangerous to everyone. … Therefore, we cannot help but urge Turkey to reverse its decision. “

European Commission President Ursula von der Leyen, who spoke to Erdogan a day before Turkey left the pact, wrote on Twitter Sunday: “Women deserve a strong legal framework to protect them,” calling on all signatories to ratify it.

The Council of Europe, which brings together 47 member states, also regretted the decision.

The convention had divided Erdogan’s ruling AK Party (AKP) and even his family. Officials withdrew last year amid a dispute over how to curb domestic violence in Turkey, where femicide has tripled in 10 years, a monitoring group said.

But many conservatives in Turkey and in Erdogan’s Islamist AKP say the pact undermines family structures and encourages violence. Some are also hostile to his stance against discrimination on the grounds of sexual orientation.

“The Istanbul Convention, originally intended to promote women’s rights, was hijacked by a group of people who were trying to normalize homosexuality, which is incompatible with Turkey’s social and family values. Hence the decision to withdraw, ”Turkey’s presidential communications director Fahrettin Altun said in a statement.

Paris said Turkey’s withdrawal marked a new regression in respect for human rights, while Berlin said that neither culture, religion nor tradition can “serve as an excuse to ignore violence against women.”

The diplomatic tension comes after Europe and the United States said last week that the move to shut down the third-largest party in parliament, the pro-Kurdish People’s Democratic Party (HDP), undermined democracy in Turkey.

In their video call on Friday, Erdogan, Von der Leyen and European Council President Charles Michel discussed a dispute, which has cooled off, over offshore resources in the eastern Mediterranean.

An EU summit this week will address relations with Ankara.