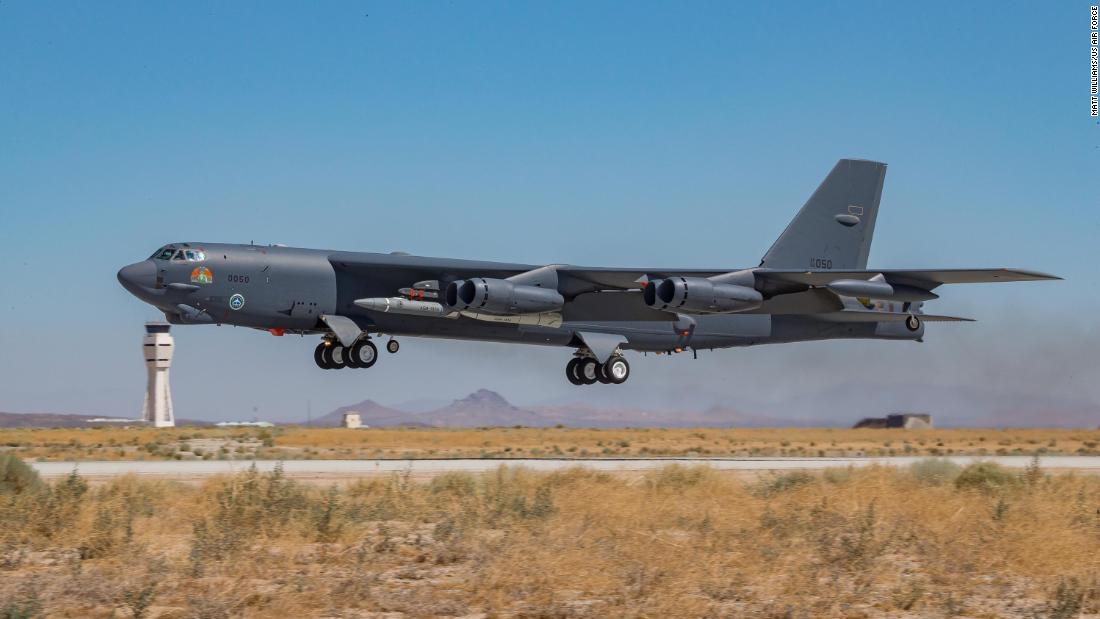 The B-52H Stratofortress took off Monday over the Point Mugu Maritime Range with the intention of firing the first reinforcement test vehicle for the AGM-183A Air-launched Rapid Response Weapon (ARRW) program. sequence and was safely retained on the aircraft that returned to Edwards AFB, “the Air Force said in a statement.

The failure of the test is a setback for the United States, which is participating in a race with China and Russia to develop hypersonic weapons at a time of mounting global tensions. The missiles are designed to travel at such high speeds that they can fly great distances and move rapidly through heavily defended airspace to strike targets such as ports, airfields, and other facilities before they can be successfully shot down.

“The ARRW program has pushed the boundaries since its inception and taken calculated risks to advance this important capability. While the non-launch was disappointing, the recent trial provided invaluable information to learn from and continue. That’s why we tested,” he said Brig. . General Heath Collins, Executive Director of the Arms Directorate Program. The weapon is intended to provide US commanders around the world “the ability to destroy high-value, time-sensitive targets,” according to an Air Force statement.

The new missile is called the AGM-183A Air-launched Rapid Response Weapon (ARRW) and is expected to be ready for deployment in the next few years. The test was specifically aimed at demonstrating the ARRW’s ability to achieve hypersonic speed.

The Pentagon is aiming to eventually develop a hypersonic missile that can travel at 20 times the speed of sound in a real-world military strike, defense officials say, not far from the speed at which space shuttles traveled when returning to enter the Earth’s atmosphere. So far, some components have been tested at speeds close to that.

Race with Russia and China

Russia and China are developing hypersonic weapons programs and Russia claims to have successfully tested a missile. The United States focuses on conventional hypersonic weapons that are based on ships, land and air platforms. Hypersonic weapons are broadly divided into two categories: air-breathing missiles and so-called “boost-glide” missiles.

The Pentagon’s hypersonic research request for fiscal year 2021 was $ 3.2 billion, up from $ 2.6 billion the previous year. The goal is to have hypersonic missiles ready for deployment in the next few years, with hypersonic defense capabilities a few years later.

China first tested a hypersonic missile in 2014 and Russia in 2016. Russia’s hypersonic glide vehicle, known as the Avangard, is equipped with nuclear warheads and launched from SS-19 ICBMs, according to the Congressional Research Service. Russia conducted successful tests at Avangard in 2016 and 2018, and in December 2019 announced that it had activated two Avangard-equipped SS-19s.

China’s hypersonic glide vehicle, known as the DF-ZF, has been tested at least nine times since 2014, according to the CRS.

“Among the new weapons systems China is testing is an intercontinental-range hypersonic glide vehicle, similar to the Russian Avangard, which is designed to fly at high speeds and low altitudes, complicating our ability to provide accurate warnings.” General Terrence O ‘Shaughnessy, then commander of the US Northern Command, said in February 2020.

General Glen VanHerck, head of the US Northern Command, warned in March that the missiles could “challenge our ability to provide actionable warnings and strike assessment.”

Last year, former Acting Secretary of the Navy Thomas Modly said hypersonic weapons “have already changed the nature of the battlespace, as nuclear technology did in the last century.” Comparing hypersonic missiles to Russia’s launch of the Sputnik satellite before the United States, Modly urged the military to invest heavily in research and development. Although hypersonic weapons have never been used in combat, he warned that they can “destabilize the global security environment and pose an existential threat to our nation.”