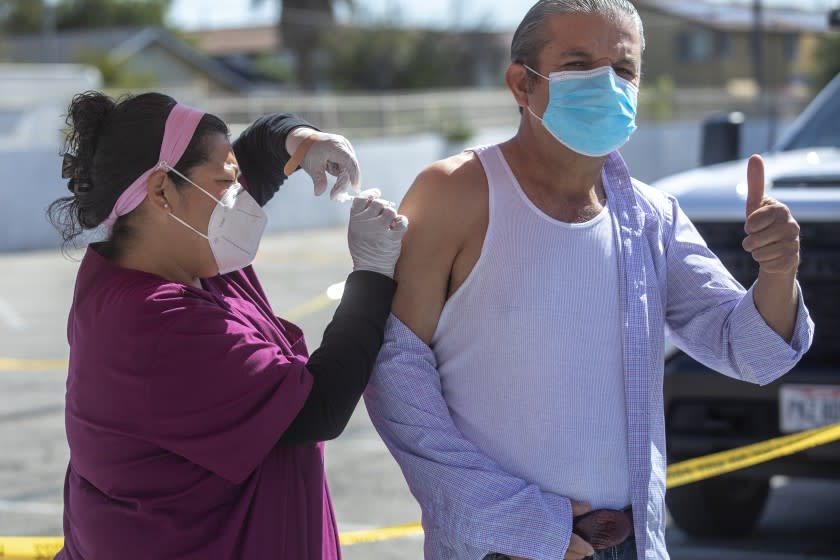 More Americans are warming up to COVID-19 vaccines, with 19% saying they have already received at least one dose and 49% expressing their intention to do so when they get the chance, according to the results of a new survey.

In all, 69% of American adults surveyed by the Pew Research Center now intend to get vaccinated. That’s an increase of 60% in November and 52% in September.

Epidemiologists estimate that up to 85% of the country will need to be vaccinated to achieve herd immunity against the coronavirus. At that point, the virus will have a hard time finding new hosts to infect and the outbreak will come to an end.

Nearly 29 million Americans have had coronavirus infections, according to data compiled by Johns Hopkins University. But experts at the Centers for Disease Control and Prevention say that even those who have recovered from an infection should get vaccinated because protection is likely to last longer.

More than half of those surveyed, 58%, said the emergence of new variants of the coronavirus has increased the urgency for Americans to get vaccinated. Strains from South Africa and Brazil were less susceptible to vaccines in clinical trials, and others, including one that emerged in California, have shown signs of resistance to vaccines in laboratory tests. Health officials have also urged vaccination as a way to get ahead of more communicable strains, like the one in the UK.

African Americans in particular said they were concerned that the new variants would hamper the country’s ability to cope with the outbreak. The survey found that 68% of black adults agreed that the variants “will lead to a major setback for efforts to contain the disease.” That point of view was shared by only 51% of American adults overall.

In fact, the survey revealed that African Americans are more likely to feel personally threatened by the pandemic. For example, 35% said they were “very worried” about getting sick with COVID-19 and ending up needing hospital care; 21% of adults overall said they felt this way. Additionally, 42% of black adults said they were “very concerned” that they could pass the virus to another person without even realizing they were infected; 30% of adults in general had this fear.

There is a basis for this great concern. African Americans are significantly more likely than Americans overall to know someone who has died of COVID-19 or who has been ill enough to require hospitalization, by a margin of 78% to 67%. A report last month from the CDC’s National Center for Health Statistics found that life expectancy for African Americans dropped by 2.7 years in the first half of 2020 (it also dropped by 1.9 years for Latinos and 0.8 years for whites).

This may help explain the sharp increase in the percentage of African Americans who see COVID-19 vaccines as part of the solution. In February, 15% of black adults surveyed said they had received at least one dose of the vaccine, and another 47% said they would “definitely” or “probably” get vaccinated. That is in addition to 62% adopting the vaccine, well up from 42% in November.

Although support for COVID-19 vaccines remains lower among African Americans than among other racial or ethnic groups, the gap is now much narrower than it used to be.

Although American views on vaccines may be converging along racial and ethnic lines, they are drifting apart politically. In February, 83% of Democrats and those who lean toward the party said they had received at least one dose of vaccine or intended to receive it. That compares with 56% for Republicans and those who lean toward the Republican Party, a difference of 27 percentage points. In November, 69% of those on the left and 50% of those on the right said they intended to get vaccinated, a gap of 19 percentage points.

Despite this, 66% of Republicans and Republican supporters agreed that getting vaccinated against COVID-19 would help get the US economy back on track. That view was shared by 87% of Democrats and Democrats, the poll found. Overall, 51% of American adults said vaccination would help “a lot” and 25% said it would help “a little.”

The findings are based on surveys conducted with 10,121 adults during the third week of February.