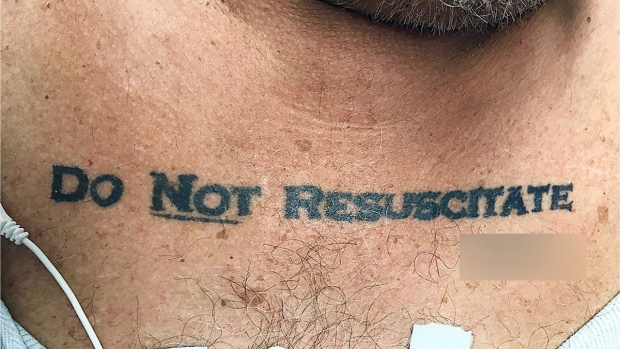 When a patient arrives unconscious at the hospital, doctors are supposed to do everything possible to revive him. But what happens if that patient has the words "Do not resuscitate" tattooed on his chest?

That was the dilemma recently faced by a team of doctors at Jackson Memorial Hospital in Miami. A 70-year-old patient had come to the emergency room with difficulty breathing, low blood pressure that was still falling and a high level of alcohol in the blood. He also had a history of COPD (chronic obstructive pulmonary disease), diabetes, and a heart condition called atrial fibrillation.

When writing about the incident in the New England Journal of Medicine, doctors say they initially decided to ignore the tattoo and began trying to revive it. They write that they were working on the principle of "not choosing an irreversible path when faced with uncertainty".

But doctors say that the tattoo left them with an ethical debate. Should they interpret the tattoo as the genuine desires of man? What would happen if I had changed my mind since the tattoo was made? What were your legal obligations in this case, or were there any?

The doctors could not revive the man to ask about his wishes, and could not get in touch with their relatives.

But they noticed the man had clearly made an "extraordinary effort" to make his wishes known at the end of life; the word "no" in "do not resuscitate" was underlined and even added its initials as a signature.

The doctors called the hospital social workers to discuss the ethics of the situation. After reviewing the case, the team decided it made sense to badume that the tattoo expressed man's "authentic preference" for not being resurrected, and a DNR order was written for the man.

Not long after, the social work team learned that the man had signed an official DNR order from the state of Florida. The man's health deteriorated throughout the night and he died without CPR or intubation to help him breathe, the doctors said.

In Canada, the Canadian Medical Association has a policy that if a patient requests an "advance directive" detailing medical procedures they want or do not want in case they become incompetent, doctors should help them develop these orders and also They must strive to fulfill them.