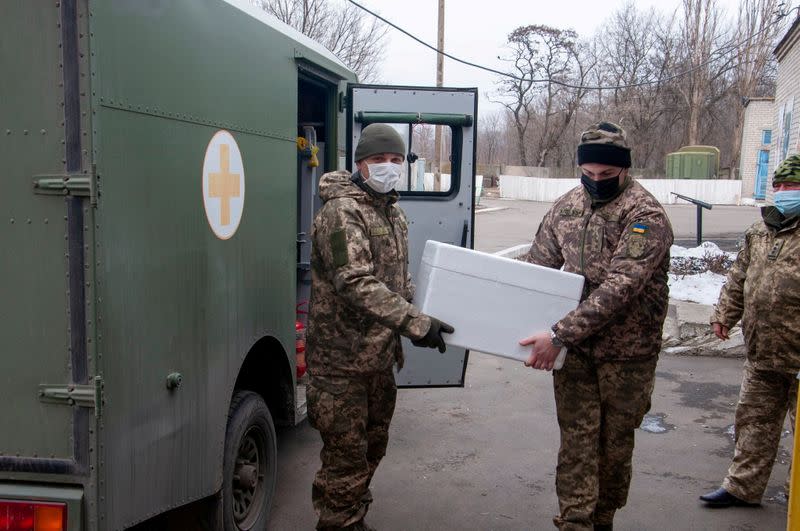 By Natalia Zinets and Pavel Polityuk

KYIV (Reuters) – Ukrainian medical facilities have thrown away some unused COVID-19 vaccines after doctors failed to show up for their own vaccinations, lawmakers from the ruling party said on Monday.

Ukraine has just started vaccinating its 41 million people against COVID-19 after receiving a first batch of 500,000 doses of Indian-made AstraZeneca injections last week, but faces a battle against vaccine skepticism that predates the pandemic.

The government has prioritized giving vaccines to front-line medical workers, but cited statistics showing that 47% of Ukrainians do not want the vaccine.

“It is important for us to understand how all the processes are set up, why doctors refuse to be vaccinated,” Oleksandr Korniyenko, the head of President Volodymyr Zelenskiy’s Servant of the People party, told a televised meeting.

“This is very bad, but there is no other option … if a person does not come, they can leave (the vaccine vial) open for 2 to 3 hours, after which it must be discarded,” said the head of the parliament. said the health committee Mykhailo Radutskyi.

A total of 3,141 injections were administered on February 28, including only 90 injections in the past 24 hours, data from the Health Ministry showed.

Health Minister Maksym Stepanov said the government was working to ensure vaccines were not thrown away, adding that this happened in other countries as well.

He was vaccinated on television on Monday and said Zelenskiy would get the vaccine soon.

“I proved with my own example that the vaccine with which we are vaccinated is an absolutely safe vaccine, it is an effective vaccine,” he said.

A significant part of the Ukrainian population, like many post-Soviet republics, is traditionally wary of vaccines, fearing the side effects of poor-quality drugs. Such distrust allowed a measles outbreak to escalate into an epidemic in 2019.

COVID-19 cases have recovered after a hiatus during a strict shutdown earlier in the year, especially in Kiev and western Ukraine, where the government established mobile hospitals to cope with a sharp increase in cases. Ukraine has recorded 1.3 million cases with 26,050 deaths from COVID-19 as of March 1.

In the northern city of Chernihiv, only 87 of the 280 doctors agreed to get vaccinated, the city clerk said in a Facebook post on February 24.