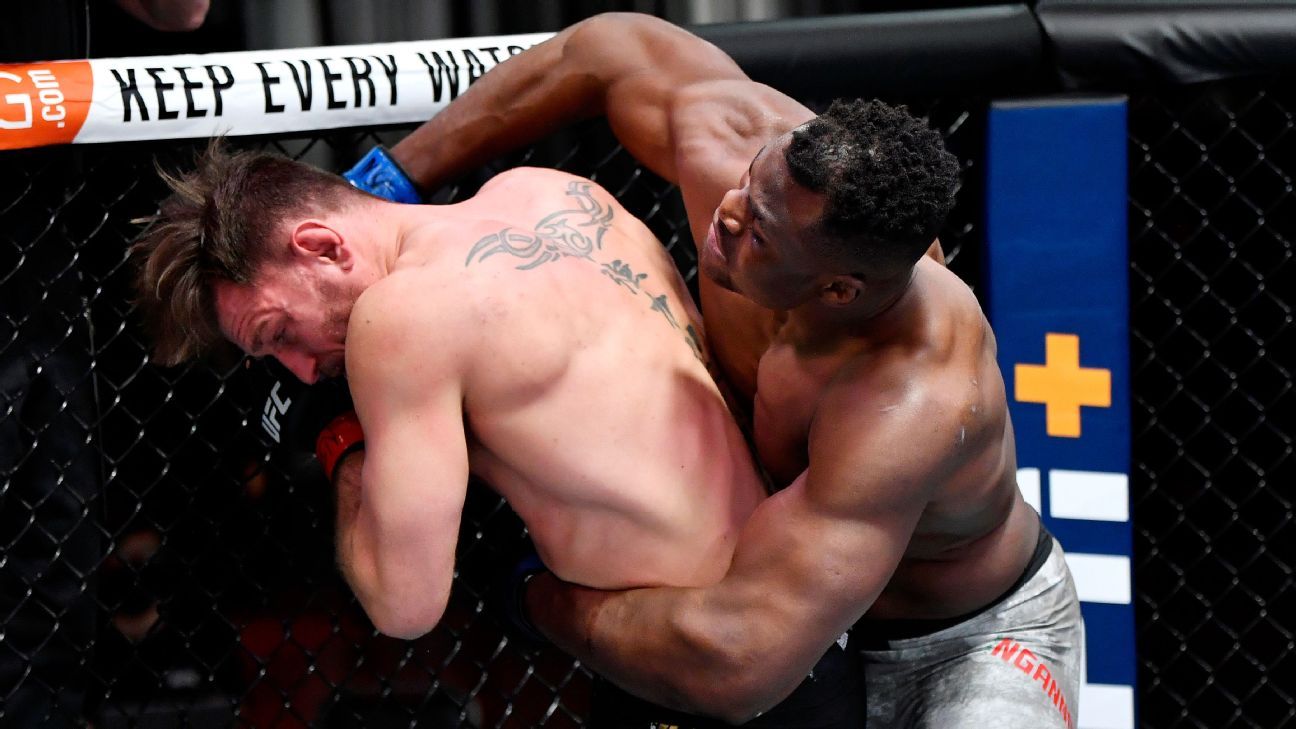 There’s a new UFC heavyweight champion and a new combat sports superstar. Francis Ngannou is arguably on his way to owning one of the best years in combat sports, starting Saturday with a brutal knockout of Stipe Miocic, the greatest heavyweight of all time. So what’s next for Ngannou? Millions Endorsements? UFC events in Paris or Africa? The sky is the limit.

As for Miocic, the heavyweight GOAT is far from out of the conversation. Is a trilogy fight with Ngannou part of your plans? Or will he temporarily step aside and wait to see the division unfold?

Before the main event, Vicente Luque made a statement with a submission win over former welterweight champion Tyron Woodley, and Sean O’Malley returned to the win column with a new addition to his featured reel.

Let’s take a look at what’s coming up for the UFC 260 highlights.

Who Should Be Next: Jon Jones

Oh baby. This is going to be a fight. It’s cliché, but it’s the truth: Ngannou is the scariest, meanest man, whatever you want to call him, on the planet right now. He is the ultimate challenge in MMA. He had that setback in 2018 against Miocic, but he has clearly learned from it and is now realizing the immense potential that we all recognized from the first time we saw him.

We haven’t seen this obvious potential in a fighter since … Jon Jones. I think it’s safe to say that we are watching Ngannou enter his peak. Meanwhile, Jones, with Khabib Nurmagomedov retiring, is pretty much the consensus pick for the # 1 pound-for-pound fighter on the planet. This is what you call a super fight.

If the negotiations between the UFC and Jones have a downside, and there has been no evidence that that is happening, but it is always a possibility, then we could see a different opponent for Ngannou.

At that point, it all comes down to timing. After being relatively inactive in recent years, one has the feeling that Ngannou is ready to go. If he wants to fight again and Miocic isn’t ready, it could be Derrick Lewis or even Ciryl Gane. However, the favorite non-Jones opponent to fight has to be Miocic, who, despite this loss, is still the greatest heavyweight of all time.

Who’s next: Winner of Ngannou vs. Jones

Miocic and Ngannou are now tied 1-1. Of course, this man deserves an immediate rematch against Ngannou. The problem is that the UFC has already made it clear that it wants to go in the direction of Jones, against which I am not against.

Jones finally moving up to heavyweight is a really big deal. He hasn’t fought since February 2020. I don’t want Jones to be out for two years, and I don’t think anyone wants to see that. Miocic, who is in his 30s, doesn’t love to fight on high frequency anyway, so let him wait. Reserve Ngannou vs. Jones in the fall, get Miocic out, seat him in the front row, build everything around him.

The sport has Jones as a heavyweight, a narrative he has long waited to see, and Miocic has time to rest and a chance to regain his belt in early 2022.

I don’t know why the idea of ​​retirement has followed Miocic in recent years. Perhaps it is because he has achieved everything that can be asked of him. Maybe it’s because he’s been in some tough fights and his activity has slowed down a bit. He has also admitted that he contemplates retiring after almost every fight.

But from a competitive point of view, he obviously hasn’t missed a step and doesn’t need to retire at all. If you go home to your family and decide to call it a day, your hat is off to the heavyweight GOAT. If you still want to compete, your next fight must be for the title. It’s the only right thing to do.

Let’s go! I mean, why not? Diaz wants to fight, but is selective who he fights with. You want an advantage. He wants one of those old school fighters, the ones who come for blood and not for points. Luque is that guy. Will Díaz accept it? Who knows? He has earned the right to choose his fights and he exercises it.

When I look at the welterweight rankings, there is no obvious matchup Luque can advance to. Maybe that’s where this label also comes from. The one that makes the most sense from a qualifying perspective is Stephen Thompson, but Thompson beat Luque by decision in November 2019. I probably should have seen this announcement coming, but I didn’t. And now I love it.

I don’t love this answer, honestly. Maia has made it widely known that her next fight will likely be her last. And if that’s the case, I don’t know if Luque is the ideal opponent. It’s a good and interesting fight, but if Maia is coming out of the sport, Luque is on his way. These kinds of fights happen, but I don’t know if we need to see this one.

Now that said, Maia is still in a high position, and there just aren’t a ton of other options for Luque. Colby Covington and Leon Edwards could be on a collision course. Gilbert Burns and Luque are teammates. It might have to be Maia.

All right, let’s bow to one topic before moving on to the next. Marlon Vera deserves credit for beating O’Malley in August, but treating that loss as a three-round one-sided loss in which we find out O’Malley is not the type we thought him to be is just absurd.

The talent is there, it has always been there and it seems that it is improving. O’Malley is really hard to match for me, because there’s definitely a part of me that wants to elevate him. He looked so much better than Almeida (who, of course, is not a proven world beater), I want to see a step up in the competition. That said, I don’t know if a ranked opponent is appropriate yet. After one more.

Costa is good, young and talented. He has a great style to match O’Malley.

Grant isn’t ranked in the top 15, but he’s on a three-game win streak, coming off an absolutely sensational knockout over Jonathan Martinez. If Martinez had won that fight, it’s actually a name he might have dropped for O’Malley. So what about the guy who just hit him?