Two large Oregon fires dissolve, and a third is close 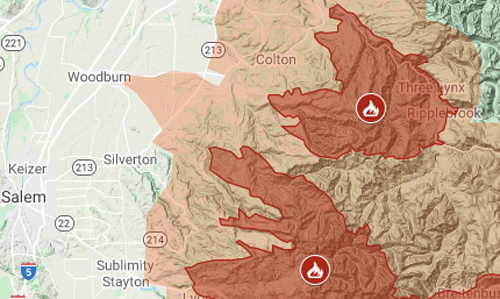 The two largest fires burning in Oregon have merged, and a third are less than three miles away.

The Lionshead Fire – which had already joined the boundaries with the smaller P515 – and the Beechie Creek Fire have touched north of Detroit Lake. The encompassing fire was initially renamed Santium, but was then reverted to its original names.

The Riverside Fire is expected to soon merge with Beachy Creek.

The mandatory evacuation zone for the three fires on Friday covered nearly 2,000 square miles and extended to the southeastern suburbs of Portland. It is shown in orange on the map above.

Clackamas County, which includes the cities of Sandy, Oregon City, Milwaukee and Lake Oswego, announced a curfew from 10 a.m. to 6 p.m.

For the latest updates on evacuations, including warning areas, see the official map from Clackamas County, Marion County and Linn County.

Kate Brown said more than 40,000 Oregonians have been evacuated and about 500,000 are in various levels of evacuation zones, either to leave or to prepare to do so. She was called back late Thursday night in a statement issued by the State Office of Emergency Management stating that one and a half million people had been ordered to evacuate statewide.

– The Associated Press contributed to this report.