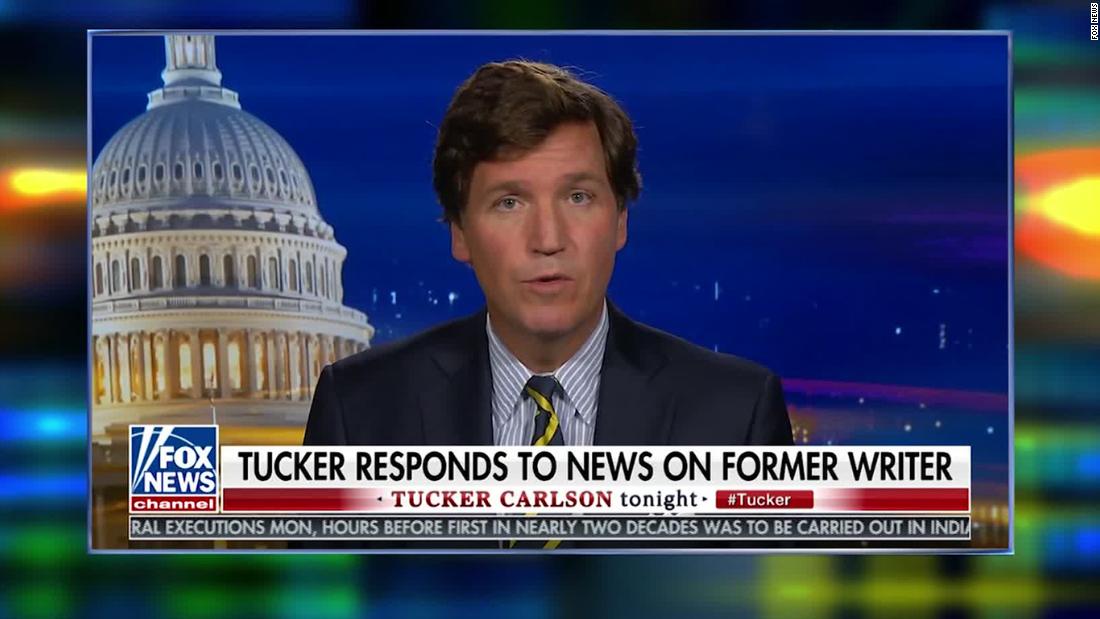 In a short set of prepared comments, Tucker Carlson (finally) addressed the revelation that his now-former lead writer Blake Neff was secretly posting racist and sexist material on an online forum. “On Friday, many of those posts were made public,” Carlson said. “Blake was horrified by the story and was embarrassed. On Friday afternoon he quit his job.”

Carlson said the comments Neff wrote under a pseudonym in the online forum were “incorrect” and that he does not “endorse those words.” Carlson continued: “It is wrong to attack people for qualities that they cannot control. In this country, we judge people by what they do, not by how they were born. We often say that because we mean it.” Carlson added that Neff “did not meet that standard and has paid a high price for it.”

And then things took a turn. Carlson said: “We should also point out to the ghouls who are now beating their chests and triumphing over the destruction of a young man that self-righteousness also comes at a cost. We are all human. When we claim to be holy, we are lying.” When we pose as blameless to hurt other people, we are committing the most serious sin of all and will be punished for it. There’s no question. “As Matt Ford of The New Republic observed,” Carlson [was] visibly less disgusted with Neff … than he [was] with the reporters who exposed Neff. “

If you looked at Carlson’s comments and knew what he was talking about, you may have noticed an obvious omission. At no time did Carlson describe his former lead writer’s online comments, let alone note that they had been racist and sexist. And at no time did he explain to viewers that Neff was actively posting those comments as recently as last week.

The average viewer who tuned in who had not seen our reports may have come away with the impression that Neff had made some nervous remarks years ago and was forced to abandon a cancellation cultural mob. That’s * NOT * what happened, but Carlson structured his comments leaving room for that interpretation. As Erik Wemple tweeted, “Viewers who hadn’t seen the stories might have no idea what he was saying.”

While trying to distance Neff from the show, Carlson said of Neff’s vulgar online comments: “They have no connection to the show.” But that is misleading at best. First, Neff was obviously Carlson’s best writer, so his personal views were directly related to the show. But even more to the point, we documented cases in our story where Neff’s online activity connected with the show, from planting an Easter egg in Carlson’s script, to something in a news story you almost certainly saw on the forum. that ended in the show, to a similar language, there was an overlap between the two …

Reminder: I could have said this all Friday

It is worth noting that Carlson had every opportunity in the world to have addressed this matter on Friday. We reached out to Neff for comment Thursday night, and on Friday morning Fox News knew our story was in the works, leaving Carlson with a fair amount of time to prepare comments and address everything.

But he did not, but waited until Monday night. What is strange, right? After all, if you were a cable newscaster, wouldn’t you be outraged if you knew that your best writer had been secretly posting racist material online? Wouldn’t you like to tackle it and clean the air? Apparently not Carlson …

At the end of his show, Carlson announced that he was on a “long-planned” vacation to “trout fishing.” While it may be true, it’s worth noting that there is a long tradition of Fox News anchors going on supposedly planned vacations when they spark controversy. Think of Bill O’Reilly (whose vacations were actually planned in advance, even if he didn’t return), Sean Hannity, Laura Ingraham, Jesse Watters, and even Carlson himself in the past …