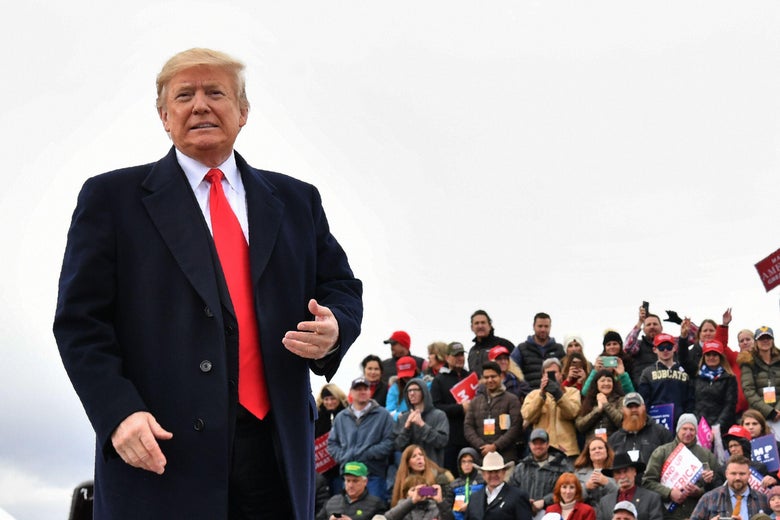 President Donald Trump is taking advantage of allegations that an accuser admitted to lying by claiming he was attacked by now Supreme Court Justice Brett Kavanaugh to suggest that all women who came forward during the confirmation process did not tell the truth . At a rally on Saturday afternoon in Montana, the president's strategy became very clear, as he did not mention the name of the accuser who reportedly retracted his story. If he had, his supporters might have realized that they had probably never heard of that woman before because his accusation never received the attention of others, especially Christine Blasey Ford.

"One of his accusers just came out a while ago and said it was all a lie and he said he had never met Judge Kavanaugh, it was an invented story, she invented the story," Trump said. "It was a lie, it was like a total, it was false, do you know what false means?
She lied about the history of rape. About rape, she lied And we're supposed to sit down and take her. "

Trump was clearly referring to Senate Judiciary President Chuck Grbadley's decision to ask the Justice Department and the FBI to investigate Judy Munro-Leighton after she admitted that she lied about writing an anonymous letter stating that Kavanaugh had raped her. When the investigators tracked her down, she admitted that she had not written the letter and, in fact, had never met Kavanaugh. Munro-Leighton's accusations were not widely reported at that time, so his name was never widely known. And now the president is using it to cast doubt on all the other accusers.

Today, president @ChuckGrbadley He referred Judy Munro-Leighton to @TheJusticeDept for investigation for making materially false statements to the Committee during the course of its investigation. https://t.co/pNfhLRnETy

"What about the others? When are they going to say what happened?" Trump asked, referring to Kavanaugh's other accusers. Later, Trump patted himself on the back for staying with Kavanaugh, wondering what would have happened if he "had retired because of a dirty dirty lie".

Trump's words at the Montana rally were a more direct version of a tweet that the president sent earlier in the day and focused on the statement that was reportedly retracted without naming Munro-Leighton. "A vicious Justice accuser, Kavanough, just admitted that she was lying, her story was totally invented, or FAKE!" Trump wrote on Twitter. "Can you imagine if he did not become a Supreme Court judge because of his disgusting false statements? What about the others? Where are the Democrats in this?

An evil Justice accuser, Kavanaugh, just admitted that she was lying, her story was totally invented, or FAKE! Can you imagine if he did not become a Supreme Court judge because of his disgusting false statements? What happens to the others? Where are the others in this?

Support our work: become a member of Slate Plus. You will get exclusive content for members and a set of great benefits, and help ensure the future of Slate.