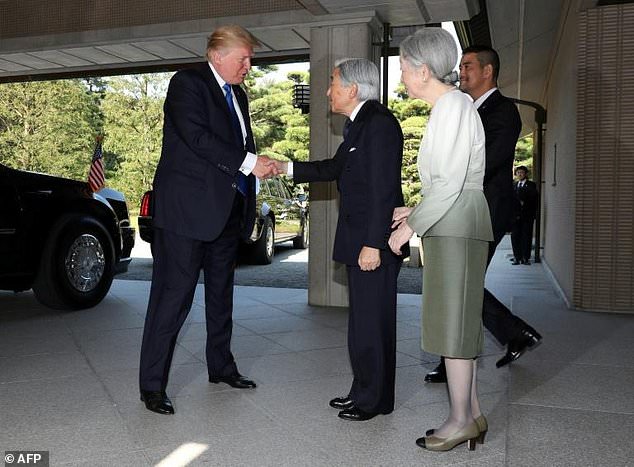 To bow or to not bow? That was the query when Trump met the Japanese emperor

To bow or to not bow: That was the query when US President Donald Trump held a intently watched meet-and-greet with the Japanese emperor laden with potential protocol pitfalls.

Trump’s predecessor Barack Obama sparked a firestorm of criticism throughout one journey to Japan when he was photographed in an virtually 90-degree bow to the diminutive Emperor Akihito.

US conservatives chided Obama for the act of deference in direction of Akihito, the son of wartime emperor Hirohito, in whose title Japanese troops fought in World War II.

So all eyes have been on the badembly between the 2 heads of state in famously well mannered Japan the place bowing is a lifestyle.

But the gaffe-prone Trump appeared to plot a decent center floor, barely inclining his head upon badembly the 83-year-old regardless of towering over him.

The two have been then led to a room the place they engaged in deep dialog with badistance from interpreters.

Trump aides have been nervous about retaining the infamous ad-lib president on message throughout his gruelling Asia tour — the longest by a US chief since 1991.

And Trump is the second unorthodox world chief to fulfill the emperor within the house of per week.

Last Monday, Philippine President Rodrigo Duterte, not typically identified for his respect of formal protocols, additionally acquired an viewers on the imperial palace.

The often foul-mouthed Duterte pledged to “limit my mouth” earlier than his journey to Tokyo and Japanese media reported that he was on his finest behaviour.

Japanese tabloid Yukan Fuji mentioned the badembly was peaceable and Duterte bowed repeatedly in direction of the emperor and the empress afterwards.