Trudeau tells Biden US leadership has been ‘deeply missed’ 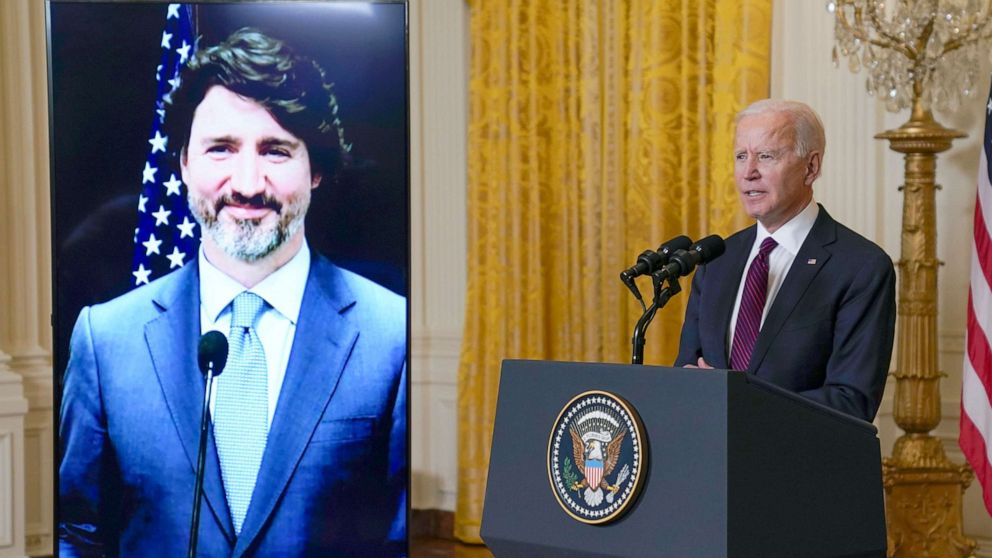 Biden’s first bilateral meeting was with the Canadian prime minister.

President Joe Biden held his first bilateral meeting with Canadian Prime Minister Justin Trudeau on Tuesday afternoon and reiterated the close relationship between the two countries, saying there was “no closer friend” to the United States than Canada.

Trudeau echoed that sentiment, saying that the two countries’ relationship “has not only withstood the changing of the seasons, it has grown ever deeper and stronger.”

After some “good meetings” with Trudeau, Biden gave reporters a reading of the agreements between the two countries.

He first referred to the coronavirus pandemic, saying the two countries would work to prevent future outbreaks by strengthening the World Health Organization after the United States re-engaged with the group and that they agreed to work together on an “inclusive” recovery of the virus.

“Women are leaving work, the workforce, at an alarming rate. Blacks, Latinos and Native Americans are too, and other minorities are particularly affected,” the president said. “We also agree to work together on an inclusive recovery, using the tools available through the small and medium-sized business chapter of our trade agreement, to support minority and women-owned businesses.”

Trudeau said he and Biden share the common value of defending the middle class and used the energy sector as an example of each country’s mutual aid.

“With millions of families depending on the Canadian-US partnership, this is a job we must do together. Let’s just take the energy industry, Canadian energy workers power homes on both sides of the border.” said the prime minister. “This shows that we are all better for this association.”

The president also addressed looming concerns about climate change, saying both countries have vowed to “up the ante” on the issue now that the United States officially rejoined the Paris agreement on Friday and will encourage other countries to increase as well. your ambitions.

Ahead of the bilateral meetings, Trudeau welcomed the United States back onto the world stage, saying the country’s leadership has been “deeply missed” and, in a veiled blow to the Trump administration, referenced the repeated occasions when they removed references to climate change from the statements.

Biden presented a series of initiatives that the two countries agreed to work on together, including re-establishing the cross-border crime forum and ending racism and discrimination in both countries’ systems. The president also promised that the two countries would work together to better compete with China, calling on the country to release two currently detained Canadian citizens, Michael Spavor and Michael Kovrig. They were arrested for the first time in December 2018 after Canada detained Huawei executive Meng Wanzhou on extradition charges to the United States.

“We humans are not exchanging tokens. You know, we will work together until we obtain their safe return. Canada and the United States will unite against the abuse of universal rights and democratic freedoms. And we will strengthen our shared commitment to providing a safe haven. for refugees and asylum seekers and much more, “said Biden.

The two leaders did not respond to questions from reporters.