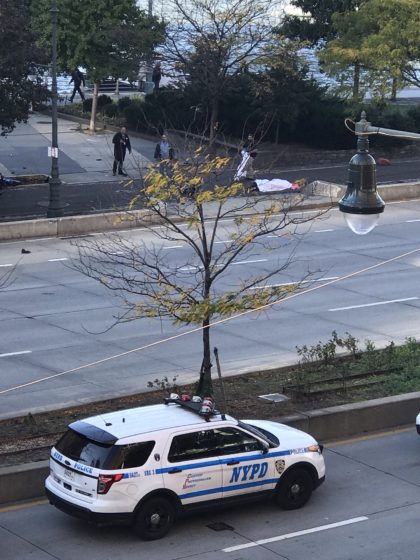 The first section below is a summary of what happened, courtesy the New York Times, which I’ll update as the NYT adds new info. Beyond that are the many updates that came in from all over, in chronological order.

Eight people were killed when a man drove 20 blocks down a bike path beside the Hudson River in Lower Manhattan on Tuesday afternoon before he crashed his pickup truck, jumped out with fake guns and was shot by police officers, the authorities said.

Two law enforcement officials said the driver of the truck, a 29-year-old man who came to the United States in 2010, was in grave condition.

The motorist, driving south down the path in a Home Depot rental truck, hit numerous people as nearby Stuyvesant High School was letting out for the day, officials said. At least 11 people were injured, but officials were still working to badess the extent of the casualties. […] Officials said the 11 people were taken to nearby hospitals with serious, but not life-threatening, injuries.

“He jumped out of the truck with a pellet gun, yelled, ‘Allahu Akbar,’ and the First Precinct lit him up,” a law enforcement official said, referring to a police officer who had been on post nearby and who the authorities credited with saving lives. […]

The driver, who was shot several times, was being treated at a nearby hospital. He had crashed the truck into a school bus. It was unclear if anyone was on the bus. The police said they were not looking for additional suspects. […]

The police identified [the driver] as Sayfullo Saipov, 29. […] As investigators began to look into Mr. Saipov’s history, it became clear that he had been on the radar of federal authorities. Three officials said he had come to the federal authorities’ attention as a result of an unrelated investigation, but it was not clear whether that was because he was a friend, an badociate or a family member of someone under scrutiny or because he himself had been the focus of an investigation.

Everything from here on is in the order it happened. I stopped once the NYT started covering it.

Reports are coming in of gunshots at Stuyvesant High School, with two people killed and the shooter reportedly in custody. Will update as we learn more.

From what I can tell, it seems like the driver of a truck ran into a school bus, and then shot people, and then ran over people.

Warning: This video has graphic content. People were reportedly both shot and run over.

VIDEO of the scene. pic.twitter.com/UVNnbtgapg

From NBC: “At least five people have been shot on the street in lower Manhattan, police sources tell News 4. A gunman apparently opened fire on a crowd of pedestrians in Tribeca: by West Street and Chambers, and West Street and Houston.” 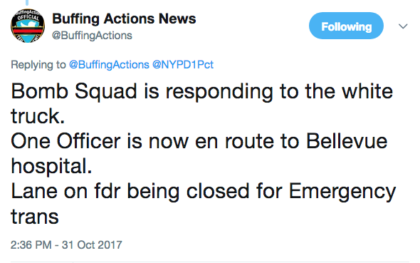 According to Pix 11, the truck ran into a school bus: “‘A car just ran over 2 people and then crashed into a school bus,’ one person on scene tweeted. ‘I see two dead bodies and citibikes on the floor destroyed.’”

From NBC: “Sources initially said they were responding to a report of at least five people shot near West and Chambers streets in Tribeca, but officials say their investigation now shows the injuries came from the truck crash. […] Meanwhile, the FDNY says emergency personnel are responding to another call nearby for a report of multiple pedestrians struck. It’s not clear if the scenes are connected.” They just updated the story to include this: “The box truck driver headed the wrong way down a bicycle path, mowing down several people, sources say. The box truck then collided with a Home Deport rental truck, and the box truck driver got out with what appeared to be a firearm. He was then shot by police, according to sources. He’s in custody, police say.”

From NBC: “Officials at the scene say six dead, 15 injured.”

From the New York Post: “‘What happened was there was a car crash… he came out of one of the cars. He had two guns. He was running around Chambers and somebody started to chase him,’ said a 14-year-old Stuyvesant student. ‘I heard four to six gunshots—everybody starts running.’”