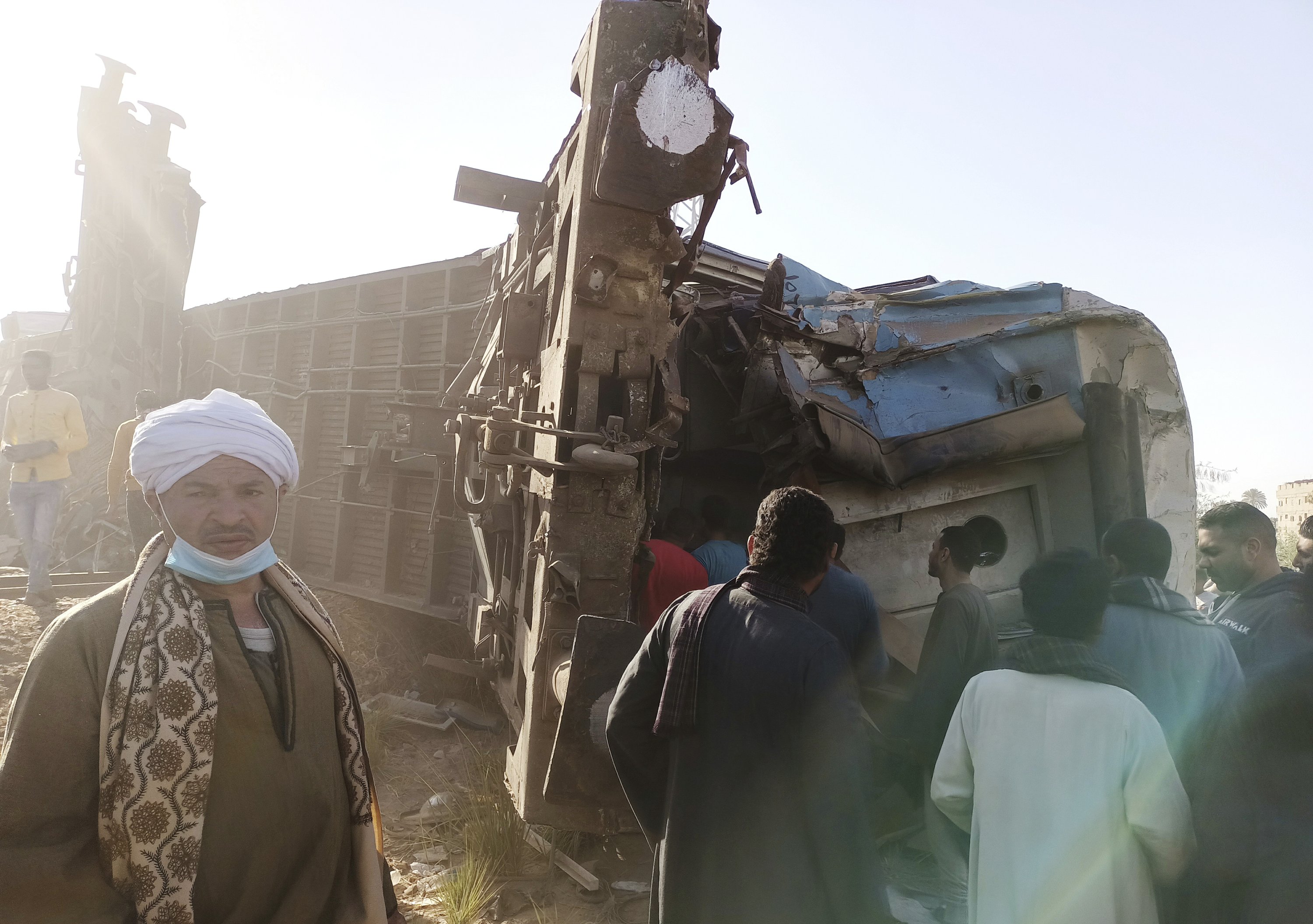 TAHTA, Egypt (AP) – Two trains crashed in southern Egypt on Friday, killing at least 32 people and injuring 165, authorities said in the latest in a series of deadly accidents on the country’s railways.

Someone reportedly activated the emergency brakes on the passenger train, and was hit from behind by another train, causing two carriages to derail and flip sideways, Egypt’s rail authorities said, though Prime Minister Mustafa Madbouly added later the cause has not been determined. . The passenger train was heading to the Mediterranean port of Alexandria, north of Cairo, railway officials said.

The video showed twisted metal piles with dust-covered passengers trapped inside, some bleeding and others unconscious. Passersby removed the dead and placed them on the nearby ground.

A passenger was heard shouting in the video: “Help us! People are dying! “A female passenger appeared to be face down, squeezed under the seats and was crying,” Get me out, boy! “

Hazem Seliman, who lives near the tracks and heard the crash, said he initially thought the train had hit a car. When he arrived at the scene, he said he found the dead and wounded on the ground, including women and children.

“We took the deceased and put the injured in ambulances,” he said.

More than 100 ambulances were dispatched to the scene in Sohag province, about 440 kilometers (270 miles) south of Cairo, Health Minister Hala Zayed said, and the injured were taken to four hospitals. The injuries included broken bones, cuts and bruises.

Two planes with a total of 52 doctors, mostly surgeons, were sent to Sohag, he added at a press conference in the province, accompanied by Madbouly, who added that a military plane would take to Cairo those who need special surgery.

Chief prosecutor Hamada el-Sawy was on the scene to investigate the accident, he said.

“The (rail) service has been neglected for decades to a point that has made it quite obsolete and extremely dangerous,” Madbouly told reporters. “We have spent billions to improve the railroad, but we still have a long way to go to complete all the required work.”

The government will pay the equivalent of $ 6,400 in compensation to each family that has had a relative killed, Madbouly said, while those injured will receive between $ 1,280 and $ 2,560, depending on the severity of the damage.

President Abdel-Fattah el-Sissi said he was monitoring the situation and that those responsible would receive “dissuasive punishment.”

“The pain that is tearing our hearts today can only make us more determined to put an end to this type of disaster,” he wrote on his Facebook page.

Egypt’s rail system has a history of poorly maintained equipment and mismanagement, and official figures say there were 1,793 train accidents in 2017.

In 2018, a passenger train derailed near the southern city of Aswan, injuring at least six people and prompting authorities to fire the country’s rail chief. The same year, el-Sissi said the government needed around 250 billion Egyptian pounds ($ 14.1 billion) to reform the rail system. Those comments came a day after a passenger train collided with a freight train, killing at least 12 people.

Egypt’s deadliest train accident occurred in 2002, when more than 300 people died after a fire broke out on a train traveling from Cairo to southern Egypt.