‘Tragedy’: Ongoing investigation after 2 workers were killed by truck in Boston 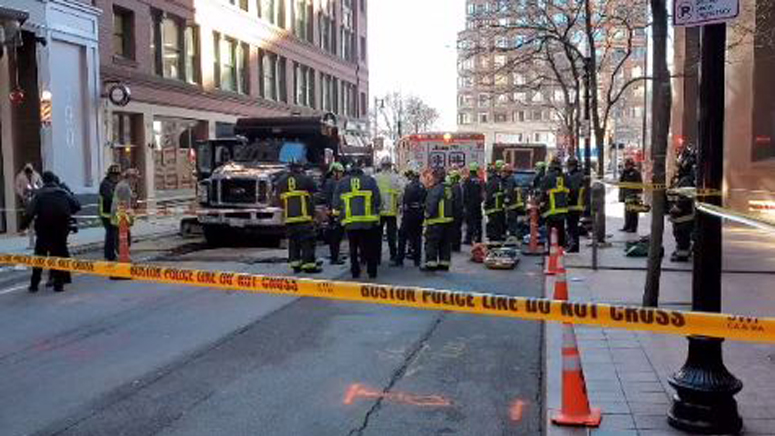 BOSTON (WHDH) – Authorities are investigating after two workers were killed by a dump truck at a construction site in Boston Wednesday morning.

Emergency crews responding to a report of two people struck in the 190 High St. area around 8 a.m. found two workers inside a hole who had been struck by the truck, according to the Boston Fire Commissioner, John Dempsey.

A technical rescue was launched and once the vehicle was moved and the scene was deemed safe, a firefighter and a paramedic were lowered into the hole to assess workers’ injuries, Dempsey said.

The two workers were pronounced dead at the scene, according to Boston Chief Superintendent Gregory Long.

A witness who called 911 said the crew was working to prevent flooding in a nearby building.

“One of the guys tried to start the truck. He was at high idle, he backed off, hit the two guys, pushed them into the hole, ”he described. “The truck kept moving and ended up staying over the hole and I ran into the hole to see what was going on and I saw two gentlemen there that were lying there.”

Speaking at the scene, Suffolk District Attorney Rachael Rollins said: “At this time we don’t know if it is a crime; We know this is a tragedy and my office is here making sure these families know that we take this very seriously. “

Boston Mayor Martin Walsh added that the city is working closely with authorities to determine what caused this incident and that Atlantic Coast Utilities will not be able to perform work in the city until an investigation is completed.

“As a former worker, the safety of our workers is of the utmost importance to me,” he said. “My heart aches that two hardworking people lost their lives so suddenly and tragically this morning, and we will work tirelessly to understand how this happened in order to create safer conditions in the future.”

The Occupational Safety and Health Administration and local authorities are continuing their investigation.

This is news in development; stay with 7NEWS on the air and online for the latest details.

(Copyright (c) 2020 Sunbeam Television. All rights reserved. This material may not be published, broadcast, rewritten or redistributed.)