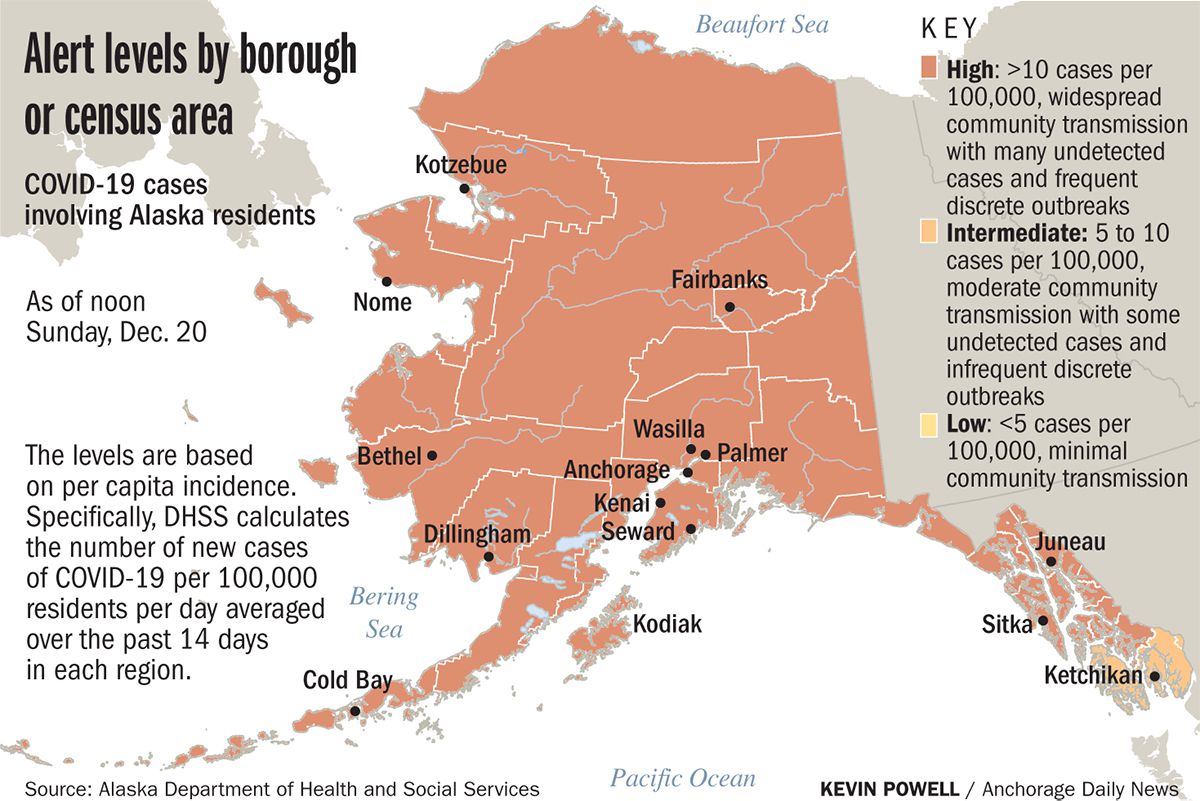 We are providing this important information as a public service without subscription. But we depend on reader aid to do this work. Please consider supporting independent journalism in Alaska for the first month of your membership for $ 1.99.

During the past week, the number of COVID-19 cases has decreased daily, although they are still higher than in spring, summer, and early fall. Sunday’s count is the lowest reported since October 14, when 153 new infections occurred. In late November and early December, case numbers reached an unprecedented statewide high.

The sharp rise in cases has increased the health authorities’ concern about the hospital’s capacity and staff.

As of Sunday, there were 121 people with COVID-19 in hospitals in Alaska and another six suspected of being infected in the hospital. Statewide, 38 intensive care unit beds were available as of Sunday.

In Anchorage hospitals, where the sickest patients are often treated, less than 25% of all beds are open on Sundays. Out of 603 regular inpatient beds, 103 were available. Eleven intensive care units available out of beds 69.

Altogether 183 Alaska and one nonsident with COVID-19 have died since the epidemic began in March. Alaska’s per capita death rate is one of the lowest in the country, but officials say it’s difficult to compare with other states thanks to the state’s vast geography and weak health care system.

Even when vaccination begins and the number of cases is reduced again, health officials recommend basic disease prevention, including wearing masks, social disturbances, and washing hands. The current decrease in the number of cases comes weeks after Anchorage returns to the “Hunker Down” state for the month of December.

Of the 180 cases recorded on Sunday in Alaska residents, 88 were in Anchorage, three in Chugiak, 18 in Eagle River and one in Girwood; There were six in Homer, eight in Kanei, six in Saltona and two in Stirling; Six were in Fairbanks and two in the North Pole; Six were in Palmer, one in Sutton Alpine and four in Vasilla; Six were in Utkiagwick; One was in Kotzebu; Two were in Juneau; One was in Sitka; One was in Wrangell; And 13 were at Bethel.

Five non-residents contracted COVID-19, with one in Anchorage, one in Kodiak and three classified as unknown by the state Department of Health.

While people may undergo an investigation more than once, each case reported by the state health department represents only one person.

It is unclear how many of those who tested positive for the virus were showing symptoms. The Center for Disease Control estimates for one-third of people with COVID-19 are anomalous.

The statewide test positivity rate was 4.73% compared to the previous week. The state reached a peak of over 9% positivity in mid-November. Health officials say positivity above 5% may indicate inadequate testing and possible widespread community transmission.