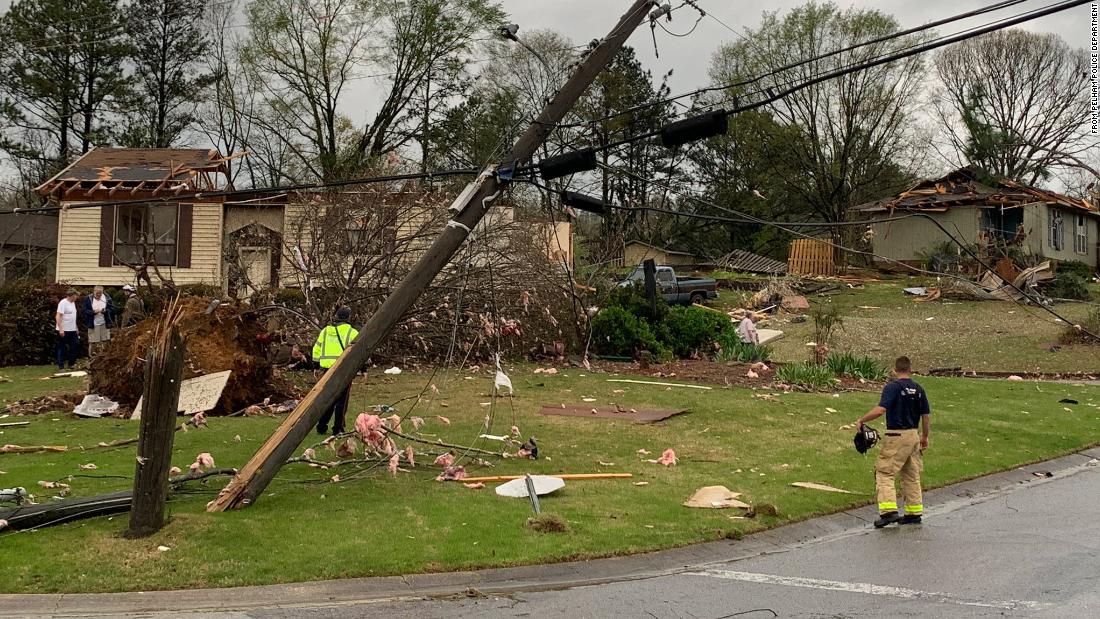 Early Friday morning, the city of Newnan, Georgia, reported damage in and around its historic center from a tornado and repair crews were working on the scene to clear the impacted areas. The National Weather Service had warned that the Newnan tornado was a “particularly dangerous situation” and had told residents to take cover.

The city was “hit hard and there is significant damage across the city,” Gina Weathersby, Community Relations Manager for Newnan Utilities, told CNN. The city is located about 40 miles southwest of Atlanta.

About 60 homes were damaged in the city of Pelham, Alabama, Pelham Fire Chief Michael Reid said.

“We are also very grateful that out of all the damage caused, no one was injured,” said Pelham City Manager Gretchen DiFante. “We are very grateful for that tonight.”

In all, there were 22 reports of tornadoes in Georgia, Alabama, Tennessee, Kentucky, and Mississippi, and at least 10 million people were under tornado watch as of 2:20 a.m. ET.

At least 5 dead in Alabama

Only fourteen tornadoes were reported in Alabama on Thursday, according to the National Weather Service.

In Pelham, Cesar Villasenor, 22, was in a truck with his boss when they were caught in a potential tornado. They were trying to take refuge in their boss’s house, Villaseñor said.

“We were literally half a mile from his house and everything was clear. Out of nowhere, it started to rain and I started filming; basically everything starts to go to hell.” In a video Villaseñor shared, debris is seen flying through the air, uprooted trees are lying on the ground and houses are damaged.

“I was like, this is probably it. I’m probably dead,” he said. “At one point, the truck was shaking a lot to the point that I thought it was like capsizing. I was shaking. I couldn’t control my hands.”

Alex McNair, owner of Corefit Strong in Pelham, Alabama, told CNN that his gym was practically destroyed by a tornado.

“The roof was raised, bricks were thrown through our garage door windows, debris was thrown into the gym, our HVAC unit was ripped from our roof, glass was thrown all over the gym, our floor is destroyed along with other roofs and structures damage to other parts of the building, “McNair wrote to CNN. But he said the most important thing is that no one gets hurt.

There was a devastating scene in a Shelby County neighborhood, southeast of Birmingham.

A tornado had ripped a house completely off its foundations and deposited it 100 feet from where it originally stood.

Residents searched the rubble with flashlights in the dark in hopes of salvaging some of their possessions. Broken furniture and a red tractor were piled up.

This was also an animal rescue center that housed more than 50 horses and several dozen goats and sheep. With the fences gone, the animals wandered disoriented. Now there is a massive effort to save these animals.

All the trees around the house have been razed. And the two older people living there had unknown injuries at a local veterans hospital, authorities said.