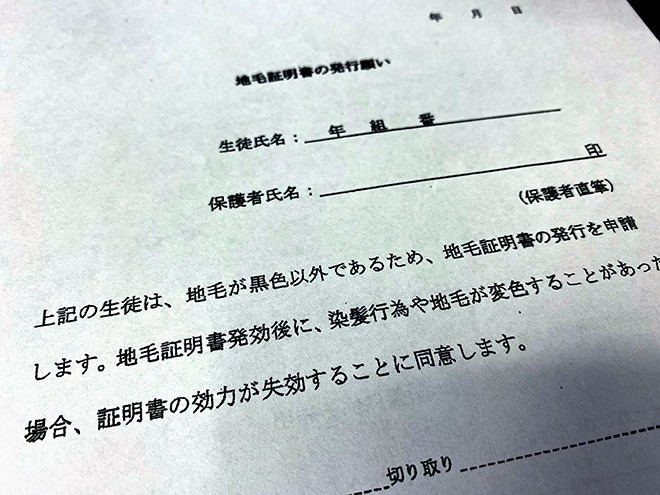 In almost half of all secondary schools operated by the Tokyo metropolitan government, a hair color code is strictly enforced.

Students presenting to class with wavy hair or locks that are not uniformly black must present a document signed by their parents or guardians indicating that it is their natural appearance.

The policy has been adopted by more than 40 percent of those schools in the metropolitan area, according to members of the Japanese Communist Party of the Tokyo metropolitan assembly who questioned the edict.

The issue of school regulations covering hair color has reached the courts and has sparked international interest in the rigid system that governs Japanese schools to encourage compliance.

The JCP, feeling that the problem infringed on human rights, submitted a request for information disclosure and was rewarded with a pile of documents handed over by the Tokyo Metropolitan Board of Education.

Of the 177 metropolitan high schools for full-time students, 150, or 84.7 percent, had some form of regulation regarding hair. Seventy-nine schools, or 44.6 percent of the total, asked students to submit documents signed and stamped by their parents certifying that they were born with a natural wave in their hair or a color other than black.

According to the documents, some schools even asked for photos of certain students when they attended elementary or high school to confirm the veracity of the details provided. In other cases, students were required to provide documents from their doctors to support their claims about the natural condition of their hair.

Some schools invalidated the documents if the student even once had his hair dyed or permed at a hair salon.

Some schools used a color scale so that students could rate their hair color.

Board of education officials insisted the documents were necessary to avoid situations in which teachers scold students for their hair based on misperceptions.

They added that notices had been sent to individual schools asking them to explain to students and their parents that submitting the documents was completely voluntary.

However, a study conducted by the JCP bloc at the Tokyo Metropolitan Assembly found that only five upper secondary schools had made sure to claim that this was the case.

“Registering a student’s hair color is a human rights violation similar to asking them to register their skin color,” said a JCP member. “It is a natural right to have the hair the student was born with and it is not something that has to be approved by others.”