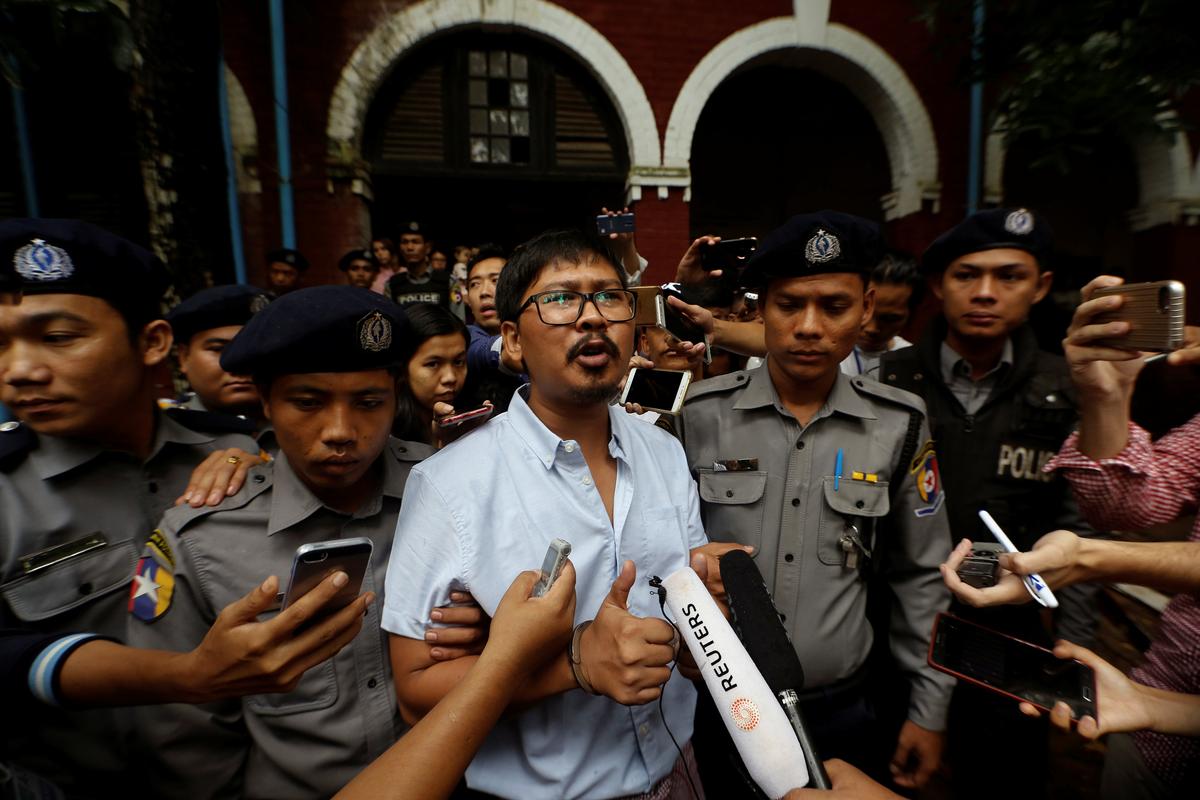 (Reuters) – Two Reuters journalists, Wa Lone and Kyaw Soe Oo, have been detained in Myanmar since December 12, 2017. At the time of their arrest, they had been working on an investigation into the murder of 10 Rohingya Muslim men and boys in a village in the Rakhine State.

After six months of pre-trial hearings, a court Yangon accused journalists of violating the Official Secrets Act of the colonial era, which carries a maximum penalty of 14 years in prison.

The following are key events in the case:

Wa Lone and Kyaw Soe Oo are arrested in Yangon after being invited to meet with the police during dinner.

The government says they face charges under the Official Secrets Act.

The army of Myanmar says it has discovered a mbad grave in the village of Inn Din, in the western state of Rakhine.

Reporters appear in court and are in preventive detention. Relatives say the couple told them they were arrested almost immediately after the police officers who met for the first time on the night of their arrest handed him the documents.

On the same day, the army says its soldiers killed 10 captured Muslims, whose bodies were discovered by security forces in the mbad grave in Rakhine, during the insurgent attacks.

A police witness, Major Min Thant, says in the interrogation that the information in the documents that the journalists had in their hands at the time of their arrest had already been published in the newspaper reports.

The court denies a request for bail.

Reuters publishes the investigation in which the journalists had been working. It describes how security forces and local Rakhine Buddhists participated in the murder of the 10 Rohingya Muslim men and boys buried in the common grave at Inn Din.

Myanmar says that action will be taken against members of its security forces in connection with the murders in Inn Din, but says it is not related to the Reuters report.

The United States urges the UN to hold the Myanmar military accountable for "ethnic cleansing" and reiterates demands for the release of reporters.

Attorneys for Wa Lone and Kyaw Soe Oo are asking the court to dismiss the case, arguing there is insufficient evidence to support the charges against the couple.

Prosecution Witness Police captain Moe Yan Naing tells the court that a police brigadier general gave orders to trap Wa Lone by handing him "secret documents" and then arresting him . Prosecutors later argued that Moe Yan Naing should be declared an unreliable witness, but the judge rejected the request.

Moe Yan Naing is sentenced to one year in prison for violating the Disciplinary Act of the Myanmar Police when speaking with Wa Lone.

Police Head of Naing Lin, Officer Moe Yan Naing said that he was ordered to capture Wa Lone, tells the court that he met with journalists, but denies having told them delivered the documents.

Prosecutors and defense attorneys present the final arguments in the pre-trial phase of the case.

The trial enters the trial phase, and the next hearing will be held on July 16.

The court's decision generates international criticism, and many countries, the United Nations and press freedom groups call for the release of journalists.