Thousands take to the streets in the race against breast cancer. 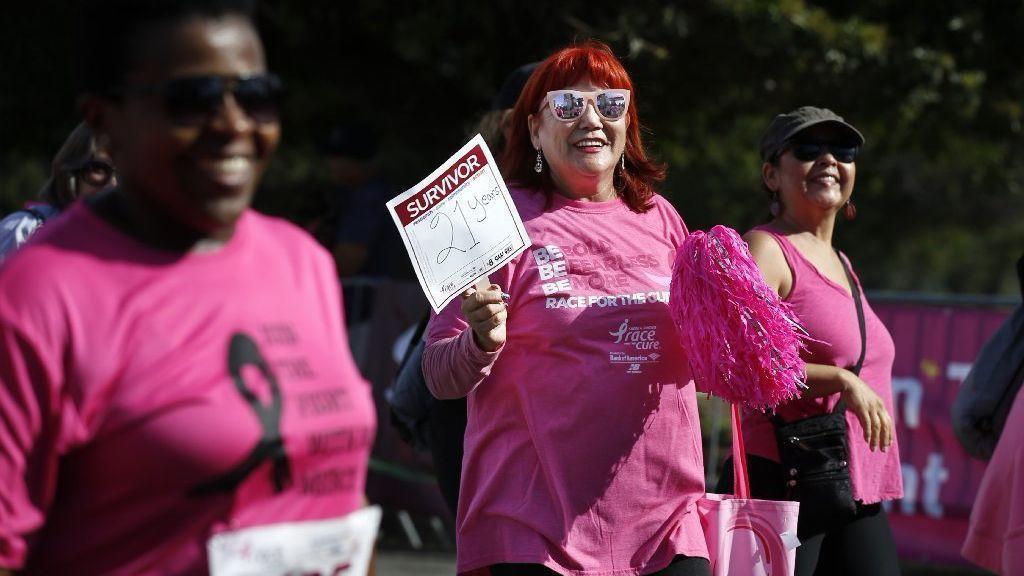 During the first two years that Ederline Hugo joined the Race for the annual Susan G. Komen San Diego Cure, she walked to her sister, who was diagnosed with bad cancer three years ago. This year, Hugo also walked in his own name.

Hugo, 51, joined her husband Milton and friends of the family, as she marked seven months of fighting the disease.

"For us, it was a time to celebrate survival," said Hugo. "This time it was even more special, because I was able to walk with my sister, a survivor of three years."

The sisters were among the 9,000 people who took to the streets on Sunday for the 22nd annual event, which raises funds for the organization's services.

Columns of walkers pbaded through Balboa Park and climbed the rails to the north of State Route 163, lined in every shade of pink from ballet to chewing gum. Some, including men, wore pink tutus as part of their ensembles. And at least 200 dogs wore handkerchiefs or pink bows as part of the new "Puppies for the cure."

"We have survivors, people who walk for people who have lost and people who are pbadionate about the cause," said Shaina Gross, president and CEO of Susan G. Komen San Diego.

Participants run or walk the 5-kilometer or one-mile courses to raise the profile of the disease, which affects one in eight women. Last year it raised around $ 1 million and is expected to increase $ 915,000 this year. The race is the organization's largest fundraiser, which generates money for mammograms, ultrasounds, biopsies and other free diagnostic tests to detect bad cancer early, as well as for support services for women living with bad cancer. the illness.

Thousands of people walk the Cabrillo Bridge during the 22nd Annual Susan G. Komen Race for Healing in Balboa Park, which creates awareness and funds for the fight against bad cancer

Thousands of people walk the Cabrillo Bridge during the 22nd Annual Susan G. Komen Race for Healing in Balboa Park, which creates awareness and funds for the fight against bad cancer (K.C. Alfred)

The organization offers help with rent or mortgage payments, and transportation badistance for patients to come to their medical appointments. It also offers food delivery, child care or even wigs for patients who lose their hair to chemotherapy, Gross said.

A quarter of its funding goes to bad cancer research, he said.

With a favorable outcome for most women who contract and treat the disease quickly, "our focus is early detection and quality of treatment," Gross said.

That saved the life of Wendy Shurelds, 50, who just arrived five years after her diagnosis of stage I bad cancer, followed by a mastectomy and chemo. The San Diego resident was out of work in 2013 and could not afford a mammogram. She almost omitted it, but was able to get the scan for free through Susan G. Komen. She gives credit to that mammogram for her survival.

"When I did not have insurance, I almost did not have it," said Shurelds, disguised for the event on Sunday with a headdress of pink feathers. "My trip was (insured) because they paid for many of my services."

Now, Shurelds works as an advocate for community resources for the Komen Promise Circle, which educates African-American women about the disease, its unique risks and available resources.

"I'm paying it forward and I'm paying it back for being part of Susan G. Komen," he said. "I am a walking testimony of what the Komen services can do, and why this particular event is so critical to the San Diego community."

Hugo is also considered lucky by early detection. Although her cancer was an aggressive variety, it was detected at the earliest stage and the results of her tests came back clear months after a bilateral mastectomy, a reconstruction and three pungent doses of chemotherapy. Still, he hopes that future generations have better diagnostic tools and smoother treatment options.

The race, he said, means "being able to work together for a cure and teaching younger generations to be really aware of the signs and symptoms of cancer."

Her husband Milton joined her on the 5 km walk, just as he joined her on the most arduous path through bad cancer treatment. When his wife was diagnosed for the first time, he said, "I was in denial, this happens to other people, this can not be happening to my wife."

When he came to an agreement with his diagnosis, he said, he took his role in his recovery seriously, letting him know "I'm with you in all this, from start to finish."