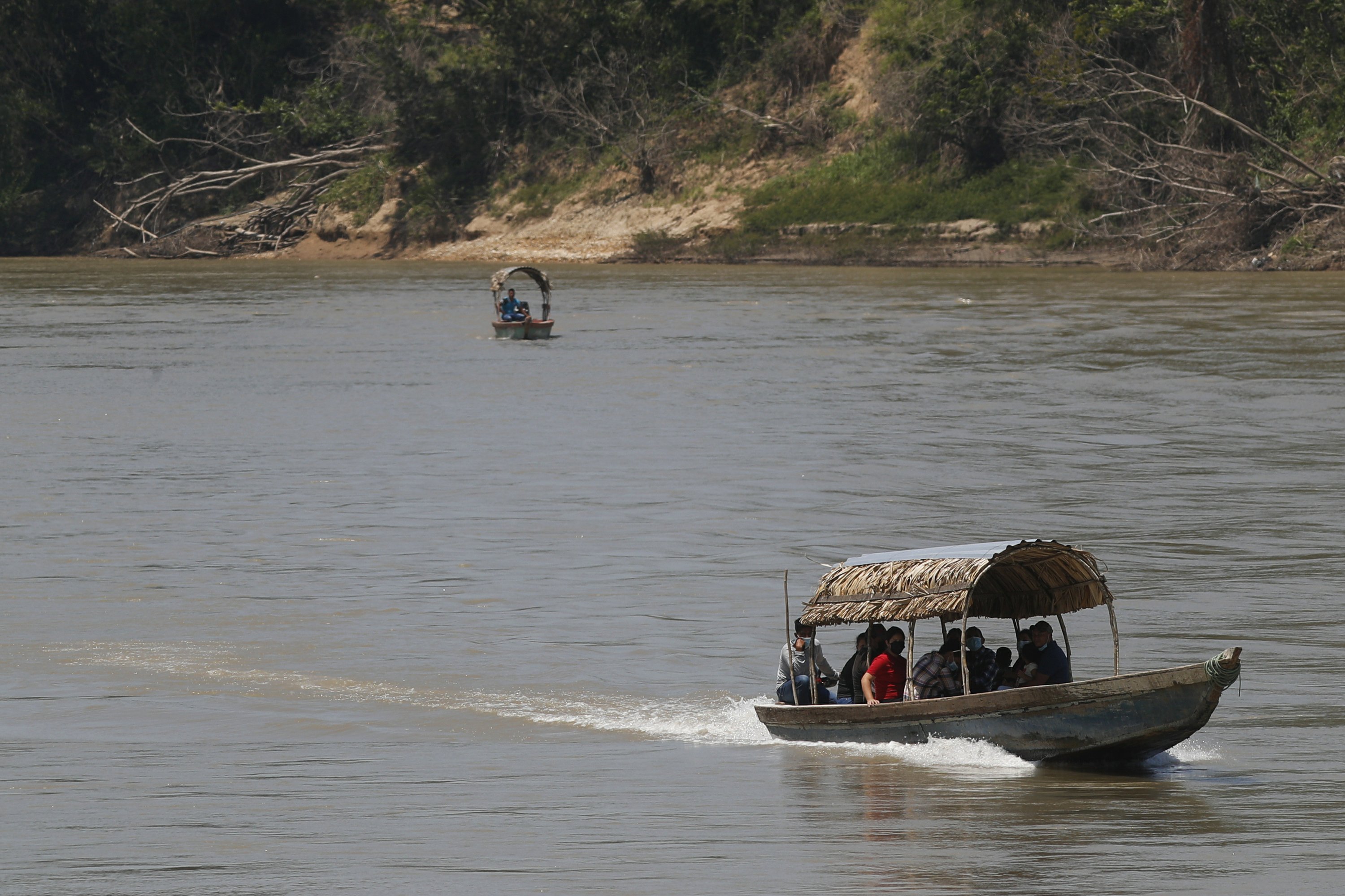 FRONTERA COROZAL, Mexico (AP) – On the day this week that Mexico imposed new measures to close migrant crossings on its southern border, about 1,200 made the trip to a single remote outpost in the jungle without showing a document to anyone.

A man who helped board the migrants for the five-minute boat ride Sunday from Guatemala across the Usumacinta River knew the count because each received a ticket.

Mexico wants to look cooperative again, as in 2019 when, faced with then-President Donald Trump’s tariffs, he deployed his newly created National Guard to curb the flow of migrants from Central America.

But the reality is that everything remains the same, with entire communities making a living from passing migrants.

Their reasons for heading north are familiar: the violence, the inability to provide for their families, the devastation caused by two major hurricanes in November and rampant misinformation.

Among those who crossed on Sunday was Yuri Gabriela Ponce, a 30-year-old mother from Tegucigalpa, Honduras, along with her husband and three children, ages 2, 5 and 9.

Now, having arrived in Mexico, they weren’t sure how to proceed. As he rested in the shade Wednesday at a crossroads north of the border, he worried about what would come next.

“They told us that there is a checkpoint ahead and we don’t know what to do,” Ponce said. “I hope they help us with the children.”

The family left Honduras after Ponce’s husband lost his construction job and couldn’t find another. They left two older children with relatives.

They initially planned to cross into Mexico much further south, but they heard a rumor that criminals were stealing children and killing their parents there. So they changed course and arrived at this remote jungle outpost.

In the Guatemalan riverside community of La Técnica, across from the Mexican border city of Frontera Corozal, a steady stream of pickup trucks arrived Wednesday. From each one, a dozen migrants came out, ate something, made calls to relatives.

“We’re almost there,” said a young woman on her cell phone as she ate breakfast on a street lined with restaurants, restrooms and convenience stores near the river.

In an hour there were more than 100 migrants on the river bank. They were mostly from Honduras, many women with children who were barely old enough to walk.

They were herded into boats with outboard motors, all organized and in the open air. When they reached the other side, only Mexico stood between them and the US border.

More than two dozen taxis were waiting, full taxis leaving and empty ones returning. Those with guides got into taxis and disappeared into the Mexican countryside. Those without guides or money, like Ponce, would go up the road.

As in 2019, Mexico relies heavily on checkpoints for the highways that cross its narrow southern isthmus to prevent migrants from heading north. He redoubled those efforts this week, as well as at airports in the region.

The more than 31,000 migrants the government has counted so far this year roughly reflect the figures from early 2019, before Trump forced Mexico to act. But the migrant detention figures in Mexico are more a sign of the government’s effort than a reliable representation of the overall migration flow.

Much of that trafficking goes clandestine in Mexico as smugglers place migrants in semi-trailers and vans or load them onto buses or planes with false documents. Often times, they only reappear at the US border.

“Migrants are visible on the Guatemala side, but they become invisible when crossing into Mexico,” said Rev. René Sop Xivir of Jesuit Services for Immigrants on the southern border.

On Sunday, even as more than 1,200 migrants crossed the remote jungle outpost, dozens of Mexican immigration officials waited on the banks of the Suchiate River 300 miles away, in front of news cameras as they returned shoppers, in mostly Guatemalans, with no intention of migrating.

That show of purpose came days before a visit Tuesday by top immigration advisers to US President Joe Biden, who sought to address the growing problem on the US border.

“They want to pretend they are doing operations, for the press,” said Sop Xivir. “In practice, there is not much control.”

During a nearly 400-mile trip along the Mexico-Guatemala border, Associated Press journalists spotted two National Guard patrols and seven military outposts, ranging from unmanned highway checkpoints to military bases. , mainly vestiges of the Zapatista rebel uprising of 1994, who were looking for weapons and drugs, not migrants.

Sop Xivir said that one of the crosses most used by families is called Gracias a Dios – “Gracias a Dios” – on the Guatemalan side.

“The entire town lives off the crossing of migrants: the smugglers, the restaurants, the hotels, everything,” said a resident of Gracias a Dios, who requested anonymity to avoid reprisals. “Look at how much construction there is and the wads of cash you see.”

Traffic had slowed down significantly in 2020 due to the pandemic, but now it’s like early 2019 again, he said. “A few days ago, in half an hour … we saw hundreds walking down a mountain path.”

Uncontrolled crossings dot the southern border of Mexico. In some, like La Mesilla, residents set up a street market on both sides of the border three days a week. In others, there is only a customs booth surrounded by dirt roads that cut through the jungle.

In El Ceibo, where the head of Mexico’s immigration agency was photographed this week reviewing operations, there is only one road. Four days before their visit, two migrants paid $ 5 to cross there by motorcycle without anyone asking for documents.

Among the most vexing problems for the Biden administration, as it was for Trump in 2019 and President Barack Obama in 2014, is the large number of unaccompanied children arriving at the US border.

According to statistics from US Customs and Border Protection, authorities found 9,457 children without a father in February, a 61% increase from January.

About 160 miles from Frontera Corozal, 16-year-old Evinson was resting at a migrant shelter in Tenosique. He had walked for two days through jungle-covered hills to get around the official El Ceibo crossing.

The lanky Honduran teenager said he was trying to reach a cousin in New York. Someone on the Texas-Mexico border was waiting for him to help make that reunion possible, he said.

“I came because the gangsters kicked me out, because they extort money from people and gave me 48 hours to leave,” said Evinson, who asked not to use his last name because he feared for his safety.

A false rumor gave him hope that everything would work out, he said, repeating what he had heard: the US government “was giving 90 days for unaccompanied minors to pass.”