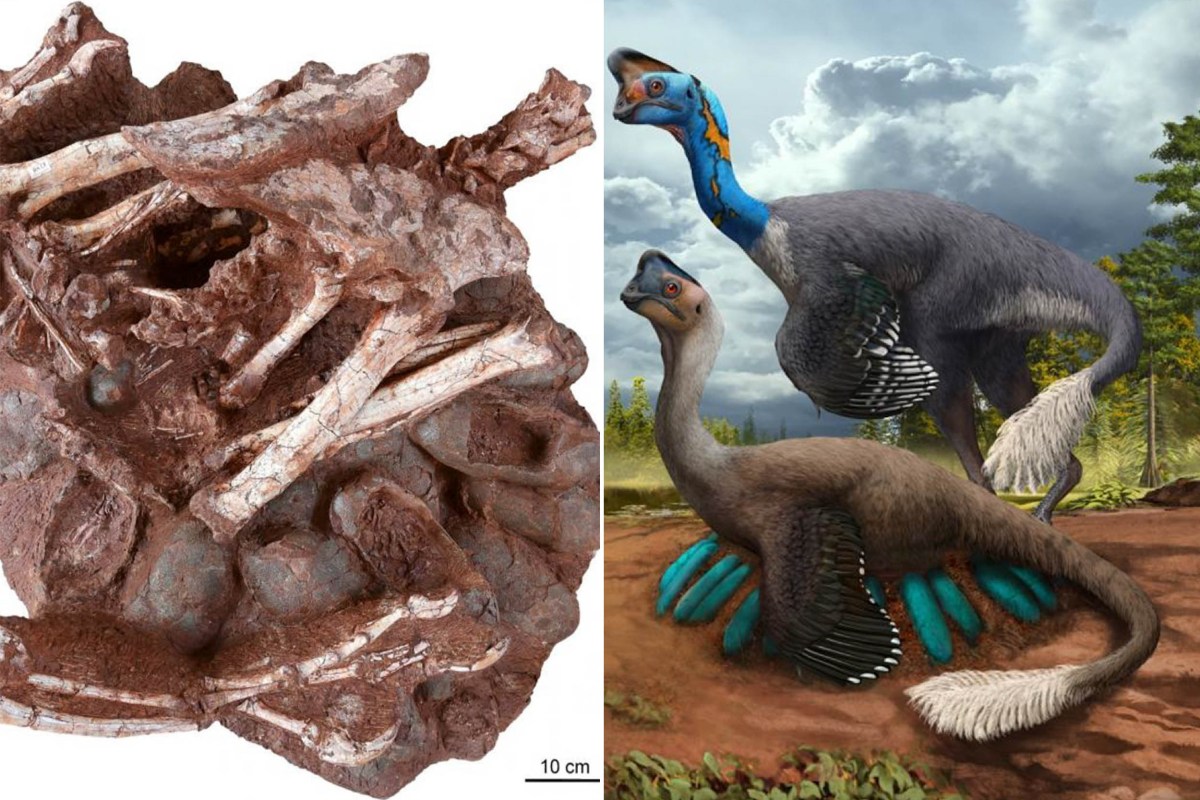 The fossil of a dinosaur sitting in a nest of eggs with embryos inside was unearthed in a one-of-a-kind discovery that sheds light on how the creatures hatched their young.

The skeletal remains of an oviraptorosaur, a bird-like beast that roamed the Earth more than 66 million years ago, were found in 70 million-year-old rocks excavated in Ganzhou, China, according to a report published in the journal Science Bulletin. . .

The partially preserved feathered dinosaur had been incubating a nest of 24 eggs, seven of which contained the skeletal remains of developing babies, paleontologists said in the report.

The groundbreaking finding is a sign that oviraptorosaurs sat in nests like their current avian cousins, rather than protecting clutches of eggs like alligators and other reptiles.

“This type of discovery, essentially fossilized behavior, is the rarest of the rare in dinosaurs,” said Matthew Lamanna of the Carnegie Museum of Natural History in Pittsburgh, Pennsylvania, author of the study in a news release. “Although some adult oviraptorids have been found in their egg nests before, embryos have never been found within those eggs.”

The scientists ruled out the possibility that the dinosaur had died while laying eggs due to the late stage of the embryos. They also tested the eggs with an oxygen isotope, showing that they were incubated at high temperatures, just like the unborn baby birds.

The researchers also found that the embryos were at different stages of development, suggesting the presence of “asynchronous hatching,” an incubation method that may have evolved in oviraptorid dinosaurs and some birds over time.

“This dinosaur was a loving father who finally gave his life while caring for his young,” Lamanna concluded in the report.

Other researchers hailed the fossil find as a breakthrough of Jurassic proportions.

“It is extraordinary to think how much biological information is captured in this single fossil,” Vertebrate Paleontology Xing Xu of the Chinese Academy of Sciences in Beijing said in a news release. “We will learn from this specimen for many years.”

The report does not mention the size of the fossilized dinosaur or its eggs, but oviraptorosaurs ranged in size from a turkey to larger than an elephant.