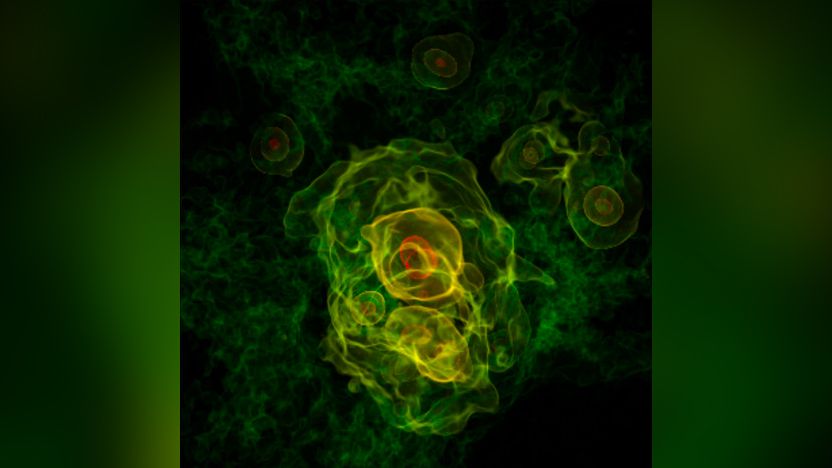 An ultra-high-resolution simulation of a small portion of the universe, a million times smaller than a proton, has revealed the first structures ever to exist. And these dense structures are strange.

The first billionth of a second after the big Bang, the universe was a hot and thick place, a place heated to more than a trillion degrees. Although scientists cannot directly observe this moment in time, they can reconstruct it using high-powered computer simulations.

The new simulations, more detailed than ever, showed how in these early cases gravity caused quantum particles known as inflatons to pile up. The results showed for the first time how these lumps formed complex and dense structures weighing between a few grams and 20 kilograms, roughly heavier than a postage stamp but lighter than a bulldog, packed in a space smaller than an elemental particle.

Related: From the Big Bang to the present: snapshots of our universe through time

The simulations are the first to show enough detail for scientists to decipher the range of sizes and shapes of these infant structures. What’s more, the results elegantly matched a simple theoretical model that is nearly 40 years old, said study co-author Richard Easther, a professor of physics at the University of Auckland.

“We are discovering this incredibly complex phase in the universe very early, which is just beginning to be properly understood.”

The simulations modeled a time at the end of inflation, a period when the universe skyrocketed in size. At that time, the universe contained only energy and inflatons, a type of quantum matter that formed from the energy field that filled all of space after the Big Bang.

The dense inflaton-filled structures seen in the simulations probably didn’t last long, as they probably turned into elementary particles in fractions of a second. But with their high densities, reaching up to 100,000 times denser than surrounding space, their movements and interactions may have generated ripples in the fabric of space-time called gravitational waves. The new simulations will help scientists calculate exactly how large those gravitational waves may have been, helping future experiments look for similar waves in the universe.

Related: How will the universe end?

The tiny lumps could also have collapsed under their own weight, creating the universe’s first black holes, called primordial black holes. Some scientists think that these black holes could be candidates for dark matter, the mysterious substance that no one has seen directly but that today makes up 85% of the matter in the universe. The physicists did not see any black holes in their simulations, but they plan to run longer and more detailed simulations in the future that could show such objects.

“Primordial black holes are an intriguing possibility at this point; they may lead to new behavior, but would also provide new controls to test the model,” Easther wrote in an email to Live Science. Since some primordial black holes should persist in today’s universe, finding one could help verify scientific models of these early times in the universe’s infancy.

Easther and his colleagues published a paper describing the simulations on March 22 in the journal Physical Review D.