The Walking Dead, Survival Rule Of The Week: Expect The Worst

It isn’t enough in a zombie apocalypse to simply anticipate. If The Walking Dead is any indication, to truly prepare, you must expect THE WORST.

Last week, I gave a lesson about the importance of anticipating things that are likely to happen. Well, this week, allow me to elaborate on that idea by saying that simply anticipating things…is not enough. No, what you really need to do is, quite frankly, expect the worst.

As I’m sure I said last week, this may sound pessimistic, but, really, it’s smart.

Why “smart”, you might ask? Well, because, only by expecting the worst-case scenarios can you truly be ready should they come. And, honestly, once zombies come into the mix, almost anything else is on the table. 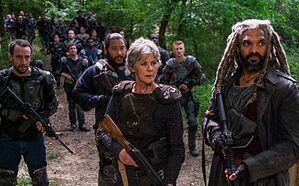 Let’s look at an example of a near worst-case scenario, shall we?

After failing to kill one of the scouts at the Paze Industrial Research facility, Ezekiel, Carol, and their contingent of Kingdom knights are forced to chase the scout through the woods to stop him alerting his outpost to the impending attack.

While Shiva eventually mauls the scout, it’s too late: He reported in over the walkie-talkie, and his team is waiting for the attack.

So, now, not only are The Saviors waiting for The Kingdom to arrive, but, let’s be honest: Ezekiel doesn’t quite seem ready for the battle to come. He seems to  be relying rather heavily on “faking it until he makes it”, as it were. While this certainly helps him keep his community together, it’s not exactly conducive to successfully leading people into battle. Carol was clearly concerned that he was being overconfident as they prepared for the attack, and, I have a bad feeling that she’s going to be right. By the time the attack ends, I imagine The Kingdom will take quite a number of casualties, and will have little to show for it.

This is the sort of thing you need to expect: That things will not only go bad, but will get worse. If you have a plan (Or two) for the absolutely worst possible scenario(s) you can imagine and prepare for it, hypothetically, anything less disastrous will be well within your capacity to deal with.

That said, one of the worst-case scenarios you need to consider is that the person making or executing the plan…may not be around to see it through. 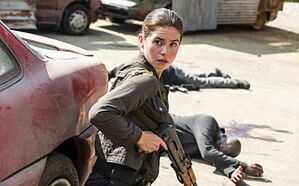 Case in point? Mara, the lieutenant of The Saviors’ insurance company outpost.

Whether she’s Morales’ boss or vice-versa, she was the one in charge of The Saviors’ defense of the base, whatever plan they had was being executed by her.

However, by the time Morales caught up to Rick, it didn’t matter: Mara, her right-hand man, Dino, and most of their soldiers were dead, the rest? By all appearances, directionless. It would only be a matter of time before the Alexandrians (And their own zombified compatriots) route them.

When I say “Expect the worst”, I’m not kidding. An effective survival strategy is one that includes the possibility of a vacuum in leadership. If you or whoever is leading your group goes down, your group will need someone to pick up the torch and carry on. If other reliable people in your group don’t know what to do, or can’t handle the responsibility, the moment your leader’s gone, your group pretty much is, too.

Additionally, part of expecting the worst means factoring in events that might seem extremely improbable, and preparing for them, too. Now, when I say “Extremely improbable”, I don’t mean planning for running into Martians or something like that, but, things that, while unlikely, are well within the realm of possibility. The reason I say this is because the best way to throw someone off their game, is to hit them with something they thought they’d never see. 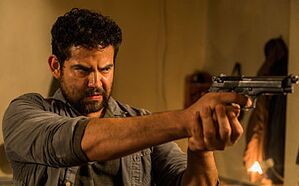 I guess the best example I can give is the return of Morales.

Just look at how Rick reacted to seeing him. He was utterly thunderstruck.

Granted, part of Rick’s reaction stemmed from the fact Morales had him at gunpoint, but, make no mistake, the fact it was Morales rendered Rick unable to react.

This is the sort of thing I’m talking about. Was it unlikely that Rick would ever see his old friend? 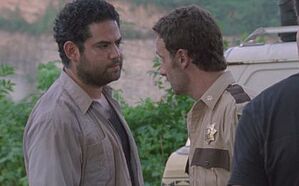 When last Rick saw, Morales was alive. He may have been heading West, but, he was still alive, and therefore, still capable of resurfacing. It may sound crazy, but, when preparing for things in a zombie apocalypse, even things that are highly unlikely, like Rick seeing Morales again, are things you need to prepare for, because they are far from impossible, and, it is because they’re so unlikely that you need to prepare for them, because, if you don’t, should they happen, they’ll leave you extremely vulnerable.

So, as we wrap up this Survival Rule Of The Week, remember, it isn’t enough to simply anticipate things, you need to expect the worst so you can prepare for it. Of course, among those worst things you should expect is that whoever in your group is doing the preparing, may not survive to see it through. You need to ensure that as many reliable people in your group as possible are capable of carrying the torch should the worst happen. And lastly, expecting the worst also means expecting the things you almost certainly wouldn’t expect. The things you believe are the most unlikely of possible scenarios are also the ones that, if they do happen, will leave you the most vulnerable.

Next: The Walking Dead, Survival Rule Of The Week: Anticipate

And that’s our survival rule of the week!! Hopefully, it will help you should you ever need it and give you that mental edge that will prove so crucial once the dead start eating everyone.

If you like this and want to find out more rules to survive the zombie apocalypse, why not pick up a copy of my book, The Rules: A Guide To Surviving The Zombie Apocalypse! You can get it on Kindle here and on iTunes here!