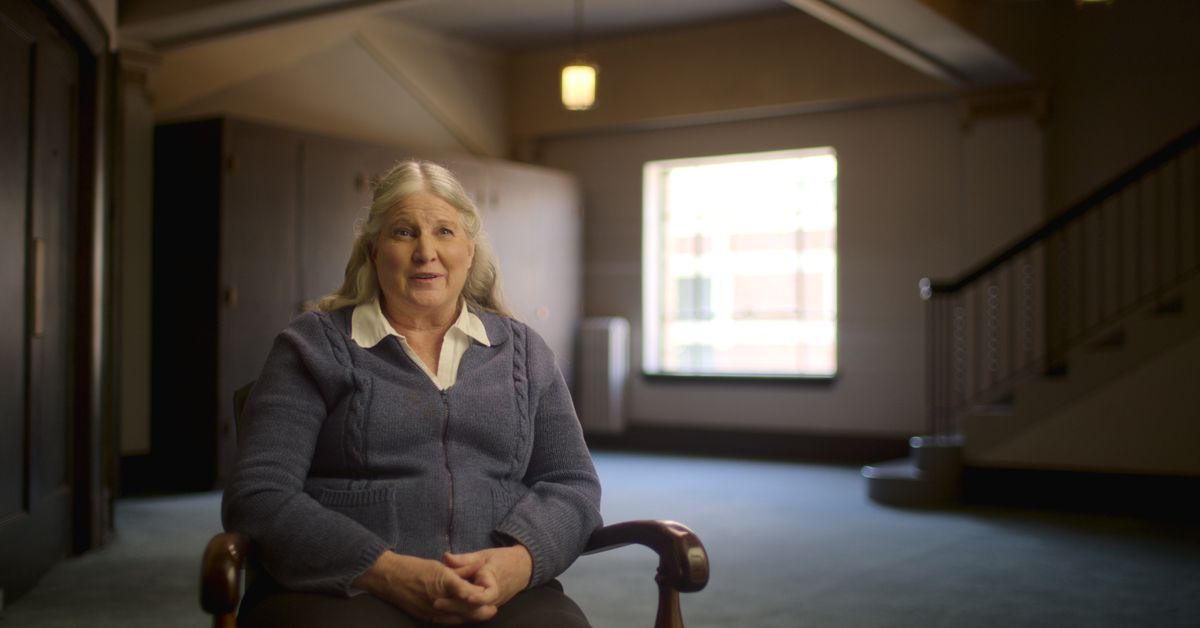 The new true-crime documentary series “Murder Among the Mormons” landed on Netflix this week without telling the little-known true story of forgiveness that followed the hoaxes and cold-blooded murders committed by master forger Mark Hofmann in the 1980s.

Fifteen years after Hofmann killed Steve Christensen and Kathy Sheets with nail-filled tube bombs in Salt Lake City, Hofmann’s eldest son turned 19 and decided he wanted to serve a two-year mission for The Church of Jesus Christ of Latter-day Saints.

“I was working and had an office with a group of women in a building in Millcreek, south of Salt Lake, and Judge Rigtrup had an office where he was mediating,” Olds told the Deseret News. “I got to know him, and I would come to greet him if he was there and talk to him for a few minutes, and he would tell me some things about what happened. He shared some stories and talked to me. He was very supportive and very friendly. “

When Olds and Hofmann’s son received his mission call to Germany in 2000, Olds naturally shared the news with Rigtrup.

“I knew he would be interested. I told him that I knew that the family, the grandparents and other members, could raise the monthly amount that we would have to pay every month to support a missionary, but I still did not know how I was going to do it. together the money for all the things she needed to get ready, like clothes.

“He said, ‘Let me make a phone call to Mac Christensen.’

Christensen was a legend in Utah as the owner of Mr. Mac, a chain of clothing stores that specialized in shirts, suits, and pants for Latter-day Saint missionaries.

Mac was also the father of Steve Christensen, whose life ended suddenly when he picked up a package containing a tube bomb manufactured and placed by Hofmann outside his Salt Lake City office. Hofmann’s goal was to get investigators off the trail of his failed house of cards built on forged documents.

It worked, for a time, but the heinous crime robbed Mac Christensen of his oldest son. Steve Christensen was 31 years old, a husband, father of young children, businessman, book collector, and Latter-day Saint bishop with immense potential.

Mac and the rest of the Christensen family were devastated.

Olds was stunned by Rigtrup’s offer to call Mac Christensen.

Rigtrup told Mac there was an anonymous missionary with a struggling single mother who needed help preparing for a mission, according to Ed Bagley, who heard Rigtrup’s story before he died in 2019. It was repeated at Rigtrup’s funeral.

“Mac was eager to help,” Bagley said. “At the end of the call, Ken said, ‘Mac, I want you to know who you’re helping.’ Then he said: he was the son of Doris Olds ”.

The judge who had sentenced Mark Hofmann to prison for murder was now asking the father of one of his victims to help Hofmann’s son fulfill a mission by preaching the gospel of Jesus Christ.

After a long silence, Mac said, “I need to talk to my family about this,” Bagley said.

A couple of days later, Mac called Rigtrup and told him that the Christensen family would be happy to provide their son’s clothing for his mission.

“I’ve made the arrangements,” Rigtrup informed Olds. “Call the store.”

Olds cannot recall whether she or her mother called Mr. Mac. In a 2019 book, one of Christensen’s children reported receiving a call from Olds’s mother and making the appointment.

“They were very nice,” Olds said of Mac’s son, Spencer Christensen, and the rest of the Mr. Mac staff when he took his mother and son shopping. “They were very polite and professional. He wasn’t really sure how to be. I mean, how are you supposed to act around someone when your ex-husband killed his brother? I mean that’s really interesting. I was just polite and very grateful. He had a very grateful heart. There was no discomfort. They were very nice to me. “

Olds said she showed Spencer Christensen the list of items her son needed.

“Of course they are experts in preparing supplies for missionaries,” he said. “They started stacking things on the counter and made sure we had everything. Then they packed everything and not a receipt, not a price tag. I had no idea how much it costs to send a missionary. Other mothers will say, ‘Well, it’s a lot.’ I have no idea how much it costs. Not a penny. Nothing. They said, ‘Thank you.’ I said thank you. ‘

Olds didn’t talk about it. Until she felt compelled a couple of years later during a symposium on her ex-husband’s crimes organized by bookseller Ken Sanders.

“He asked me to come,” he said. “I didn’t want to and I was scared. So I was very shy. I did not want to speak. I finally decided to leave at the last minute. I went and answered some questions. “

“I think it was Al Rust who started talking about forgiveness,” Olds said of a friend of Hofmann’s whom he defrauded of tens of thousands of dollars. “He said, ‘I thought of Mark as a son, and I loved him, and I still love him and I have to forgive him. I just have to let it all go. ‘

Olds felt he had to say something.

“I had to break my promise,” he said. “It was a promise, but I had to break it. I stood up and said, ‘This is what happened. Here is this person, he is helping the son of the man who killed his son. That was something really amazing, I’ve just been very grateful for it. “

Also the Christians. Years before Mac Christensen died in 2019, he also forgave Hofmann, using the kindness of his lost son as an example of how to live.

“I forgave him,” Mac told the Deseret News in 2011. “I wouldn’t ask them to let him out, but I forgave him. That is what you have to do. You have to forgive and just help people. “

Mac’s son who outfitted the new missionary described the aftermath in correspondence published in “The Divine Gift of Forgiveness,” a book by Elder Neil L. Andersen of the Quorum of the Twelve Apostles of The Church of Jesus Christ of Saints. Last days:

“That young man may have received free clothing, but the gift I received is priceless,” wrote Spencer Christensen. “I did not feel anger or hatred towards his father; That burden was not mine to carry. It was about doing what the Savior would do ”.

Netflix knew the story, but it was between hours of information that it had to be left on the cutting room floor. Jared Hess, the co-director of “Murder Among the Mormons,” who heard Olds’s story, shared it briefly on KSL’s “The Movie Show” last week.

“Here the victim’s father steps in and quietly offers to help the family of the guy who murdered his son,” Hess said. “It’s just amazing and a testament to how amazing it was.”

Olds asked for privacy for his son. Now 62, she works as a conscience coach in Millcreek, Utah. Helps people to relieve stress and personal development.

Ironically, her career grew out of being used by her ex-husband and the months and years of anguish after Hofmann was seriously injured by one of his own bombs and when investigators finally discovered that he was not another victim of a series of bombings. but in fact it was the same attacker. Then she had to handle court hearings, Hofmann’s Rigtrup sentencing, divorce and single motherhood.

“People ask me, ‘Well, do you know what stress feels like?’ Oh yeah. I know stress, ”he said with a laugh loaded with life experience.

“I remember my family came and other people came during all that time,” he said. “They came and felt bad and wanted to help me. They did not know what to do. They did not know what to say. You can’t take it off. What do you do for a living? I remember they came and they didn’t know what to say, and I would be the one to make them feel better. I would be the one to tell you about it. They would leave very happy, very relieved, very good. I was the one doing the work for them. That is what I do in my life. I help people feel better. So it was a premonition. I didn’t know it then, but it was a premonition of my life’s work, helping people feel better. “

Olds said he liked “Murder Among the Mormons.” The directors interviewed her for hours, in a morning session and an evening session, at the Masonic Temple in downtown Salt Lake City. She has been interviewed for documentaries many times over the years. The part of the story that has never been shared in any of them, he said, is the part about God’s help.

Now, he’s starting to tell. She said that KSL-TV plans to broadcast an interview with her soon about God’s place in her history.

“I thought it was amazing everything that was done in (the Netflix documentary series), the fluidity of the transition to each piece and how they put it all together,” Olds said. “It was amazing. Editing was great. There’s a lot on the cutting floor. I know it’s kind of difficult to do that. I’m so thankful to KSL for being able to tell that part of the story that isn’t really told.

Get behind the scenes of what’s happening with The Church of Jesus Christ of Latter-day Saints and its members.