The Senate will “move forward” on legalizing marijuana regardless of Biden’s position. 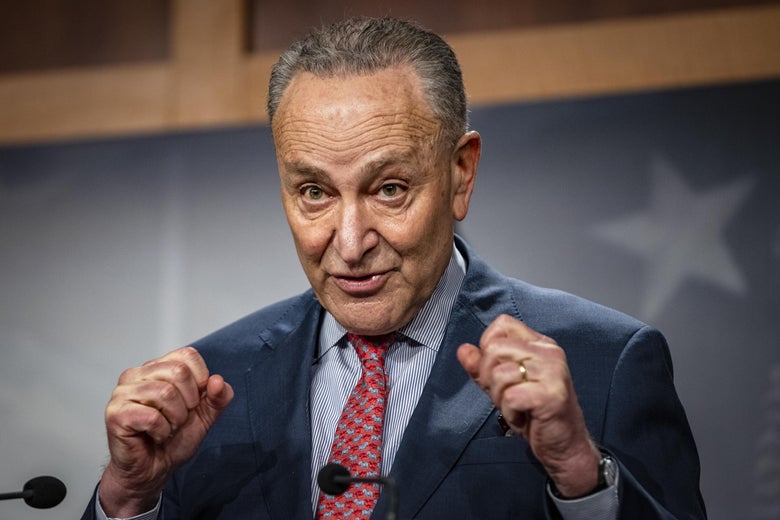 Senate Majority Leader Chuck Schumer is ready to use the weight of his office to push for marijuana to be legalized across the country. After New York decided to legalize marijuana earlier this week, Schumer said he is hopeful that President Joe Biden will end up resolving the issue. But regardless of whether that happens, “at some point we are going to move forward, period,” the New York senator told Politico. Schumer, who first introduced a marijuana legalization bill in 2018, said he is working with Senators Cory Booker of New Jersey and Ron Wyden of Oregon on the legislation.

So far, Schumer doesn’t offer any details on what the legislation might include: “you’ll have to wait and see,” he said, but described it as a “comprehensive bill.” Once he does come forward, Schumer has vowed to sit down with the people who oppose the measure to see how they might get involved. Schumer said that he is “personally in favor of legalization” and specified that “the bill that we will present goes in that direction.” Schumer shared the Politico interview On twitter and said he is working “to end federal marijuana prohibition and repair the damage caused by the War on Drugs.”

The War on Drugs has been a war against people, and people of color in particular.

I am working in the Senate to end federal marijuana prohibition and repair the damage caused by the War on Drugs. Https://t.co/UU68K7ws4t

Schumer seems optimistic that Biden’s thinking on the issue may evolve considering that more than 40 percent of Americans live in states that have passed legalization. “I want to make my case for you, as many other advocates will,” Schumer said of Biden. For the Majority Leader, there is a good case for how state efforts to legalize marijuana have gone. “The legalization of the states worked remarkably well,” he said. “They were a great success. The horrible parade never happened and people got more freedom. “

Schumer said his thinking on the issue began to change when he spoke to “average people” in Denver about the issue and saw how people felt that legalization helped the state with additional tax revenue and did not hurt anyone. “People were free to do whatever they wanted, as long as they didn’t hurt other people,” Schumer said. “That’s part of what America is all about.”

Under the Republican-controlled Senate, the issue never got anywhere, but now lawmakers would be forced to make their views clear, which could put many in an awkward position considering that more than two-thirds of the Americans now support the legalization of marijuana.