The real recession is just starting 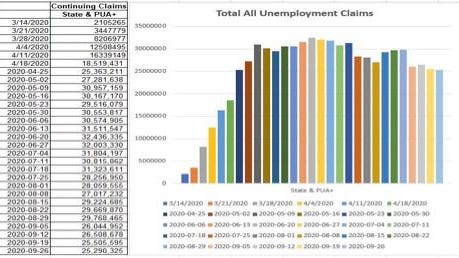 At the end of the month, we are going to announce a 30% + jump in real GDP to BLS (Atlanta Fed forecast is now above 35%). Most of it is already priced in the equity market, so positive or negative feedback will only occur if the report numbers are above or below consensus. Also, this is old news, as the Q3 must have been in the rear-view mirror for a month.

Markets worried about changes in Fed policy that tolerate high inflation rates, and that some rebound in depressed commodity prices and some food (related to supply) and used car prices due to the end of September Has increased slightly. Reducing inflation is non-existent, and falling, a key component of the Consumer Price Index (CPI). Furthermore, consistent with its wording, the Fed expanded its balance sheet in mid-October to reduce the yield curve.

The best gauge of economic health is employment, and, on this front, the news is not good. New unemployment claims continue to exceed +1.2 million / week; The value of pre-virus is + 200K. When all claims are considered, the total is more than 25 million, a real unemployment rate of over 15%.

Effect of Stimulus on Spending

On Friday (10/16), the news that retail sales rose 1.9% in September, the equity markets rose sharply after the start of several sessions during the week, as expectations for an immediate additional fiscal stimulus package faded. She went. In a recent blog I explained how consumption increased in August as well, due to the large pool of savings resulting from the CARES Act. There was still very little savings left in the pool over and above what was the pre-virus criterion measured by the St. Louis Fed. I suspect the last of those “extra” savings was spent in September, leading to an unexpected increase in retail spending.

But, with the news of unexpectedly good retail sales (1.5% even pre-auto-used car sales largely spared public transportation), the market ended the day and down for the week done. Despite the scope surrounding the data release, Without excitement, the economy contracted (At least -10% according to economist David Rosenberg). Even with title retailing, the underlying economy is actually in recession and will remain for a significant period of time. An economy not in recession, the Fed does not need its balance sheet and money supply. (The Fed added $ 75 billion to its balance sheet for the week ended Wednesday, October 14Th; Not surprising that the yield curve declined!) Not in recession An economy also does not need another fiscal stimulus package begging for the Fed (especially Powell). While it appears to have stalled due to political reasons, it is likely to go ahead after 3 NovemberThird.

Interest rates have increased compared to the previous month, the way the Fed’s policy shift would push monetary policy further into inflation, in part, the FOMC minutes (Federal Open Market Committee, Fed Committee-Making Rate), which openly worried is. More fiscal stimulus was needed, but it would not proceed in a timely manner (and later Chairman Powell promised Congress that the Fed would reduce any fiscal deficit (his “hand in hand” comment)), and, in part, From, it is expected that any new stimulus will come after the election no matter who wins (but a big provocation if Democrats win). Because a new stimulus would dramatically increase supply, rates began to rise in late September / early October. By its wording, the Fed facilitated loot to lower rates back over the past several market sessions.

There has also been some concern about the re-emergence of inflation, another factor that has been the cause of the recent modest rise in interest rates. This concern had initially changed how the Fed would target future inflation. We have seen some rise in commodity and food prices. Many of the commodity spikes were simply a surge from large downdrafts from last spring. Price increases in food, especially meat, are mainly caused by supply issues as processing plants deal with virus prevention issues. The headline PPI (Manufacturer Price Index) for September was + 0.4%. Pre-food and energy, however, was very meek + 0.1%. Therefore, there is no inflation to worry about at the manufacturing level. September’s CPI (Consumer Price Index) increased + 0.2% versus August and 0.2% Ex-Food and Energy. Year over year, the CPI has increased by 1.37%; Not showing any worrying trend again. Rent and similar calculations (related to mortgage costs) comprise more than one-third of the CPI index. Rents are now deflecting, especially in densely packed urban centers, and falling falling rates have an impact on mortgage calculations in the index. Therefore, it appears that measured CPI inflation is not going to be a problem for some time, at least until we get through the incoming wave of eviction.

To estimate the health of the economy, one should look no further than the state of the labor market. And, on that front, the news is not good. At the state level, initial claims (ICs) jumped more than + 76K in the first full measurement week of October and this is without any reporting from California. (California IC data for the week of September 26Th Used on 8 OctoberTh And 15 OctoberTh Data release covering the week ending October 3Third And 10 OctoberTh. California is back online for a data release on October 22nd, Covering the week ending October 17Th. There will likely be significant modifications upwards. Until California was found and a significant number of fraudulent claims surfaced, Disney and the airline’s layoffs probably swallowed their IC numbers – we’ll know soon!

The table and chart accompanying the state ICs show the flat slightly upstream from the right hand tail. “Normal”, that is, pre-virus, is shown in the tail of the left hand. Also remember that + 885K is IC new The layoffs, most of which occurred in the prior week. Oh, is that so! In addition, the IC added another + 373K under the CARES Act PUA program (Epidemic Unemployment Assistance – for self-employed, independent contractors and gig workers). While the PUA ICS-91K fell from the prior week’s + 464K level, when state ICS and PUA IC are combined together, the result is a mind-blowing of +1.26 million ICS for the week of October 10.Th. This is 6.5 months after the initial tremors.

When the Continuous Claim (CC) is added to the IC as shown in the chart and table at the top of this blog, more than 25 million remain unemployed. While the “official” U3 number is 7.9% for September, the “real” unemployment rate is in the 15% -20% range. The right hand side of the chart shows that, while total unemployment is below its 32 million peak in June, the improvement stalled in September. The left-hand tail of the chart shows very few, pre-virus criteria.

Finally, the decline in CC in state programs appears to be largely an exhaustion of eligibility, not re-employment. The monthly BLS Jobs (Job Opening and Labor Turnover Survey) report showed a reduction in hiring and continued significant levels of new retrenchment in various surveys of employment advisors.