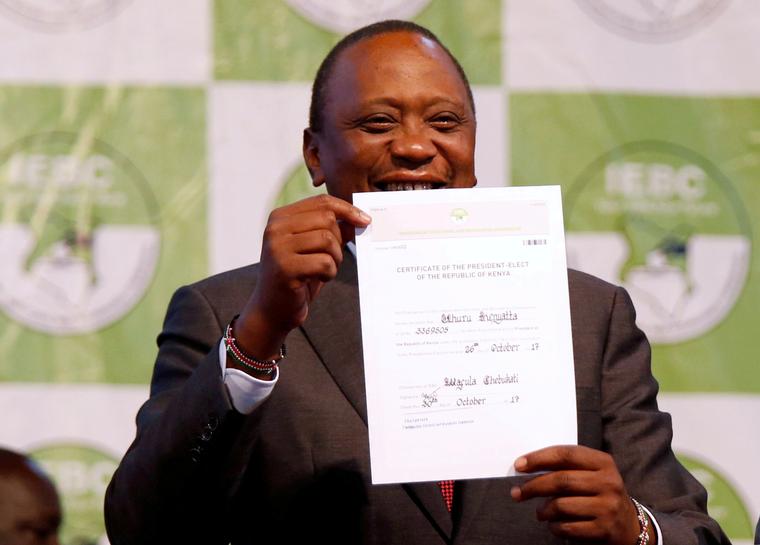 NAIROBI (Reuters) – Kenya's political divisions seemed to deepen on Tuesday as security forces patrolled the capital in preparation for the inauguration of President Uhuru Kenyatta and opposition leaders urged supporters to attend a rally. rival manifestation.

PHOTO OF THE ARCHIVE: The current President Uhuru Kenyatta holds the certificate of the President-elect of the Republic of Kenya after he was announced the winner of the repeated presidential elections at the National Computing Center of IEBC in Bomas of Kenya, in Nairobi on October 30, 2017. REUTERS / Thomas Mukoya / Photo Archive

The extended election season has divided Kenya, a Western ally in a volatile region, and has reduced the growth of East Africa's richest economy.

Supporters of Kenyatta, who won with 98 percent of the vote after Odinga's boycott, are urging the opposition to hold talks and move on.

"Our responsibility after the political competition is to unite and work to build the nation," Kenyatta said at a church service on Sunday.

But Odinga's supporters say they will not pardon the ruling party, accusing it of stealing elections, rampant corruption, directing abuses by security forces and neglecting vast swathes of the country, including Odinga's heart in the west.

PHOTO OF THE ARCHIVE: Kenyan President Uhuru Kenyatta delivered a speech during a ceremony at the Anglican Church of All Saints in Nairobi, Kenya on October 5, 2017. REUTERS / Baz Ratner

"The return to backwardness Politics of our past is more than unacceptable It is intolerable (…) This gap can not be saved through dialogue and compromise, "the opposition alliance of the National Alliance of Odinga said in a statement.

The opposition plans to hold a prayer meeting in the capital on Tuesday, saying it wants to commemorate the lives of Odinga's supporters killed during clashes with security forces during the election period.

PHOTO OF THE ARCHIVE: The President of Kenya, Uhuru Kenyatta, gives his vote during a presidential election held again in Gatundu, Kenya, on October 26, 2017. REUTERS / Siegfried Modola / Archivo Foto

More from 70 people have died in political violence this election season, mainly by the police.

But it was not clear if the authorities would allow the demonstration. Nairobi County Police Commander Japheth Koome told Capital FM radio on Saturday that police had not been notified about the rally as required by law.

"Whoever thinks he has intentions to do that (hold a demonstration, and), does not involve the police, he wants to break the law," he said. "Why do not you tell that person that the law will deal with such a situation firmly?"

The interior ministry and police spokesmen declined to comment Monday when they called to comment on whether the demonstration could continue.