The Pope defends his Myanmar diplomacy: “I did not negotiate with the truth” – tech2.org

The Pope defends his Myanmar diplomacy: “I did not negotiate with the truth” 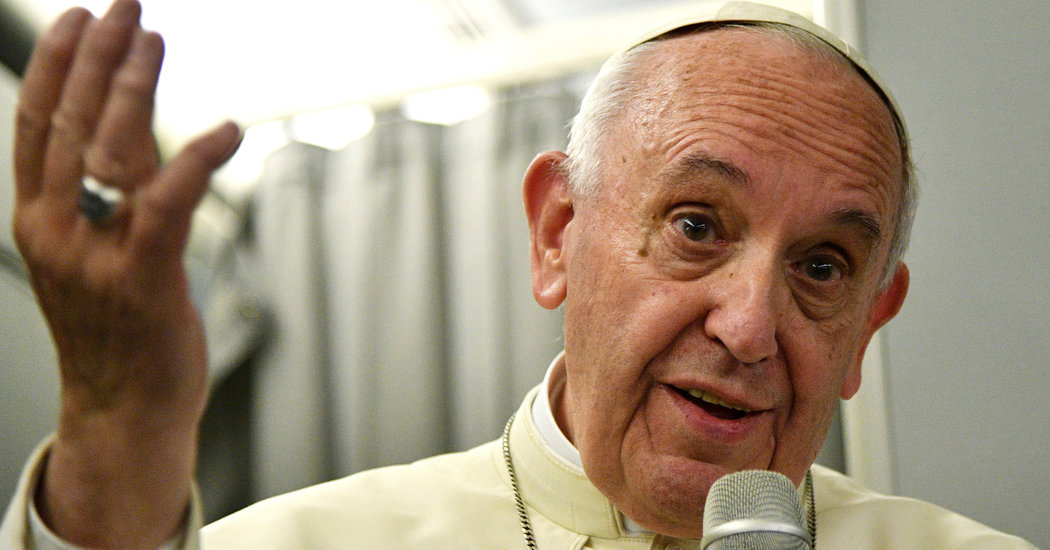 "I am very, very satisfied with the meetings," he said.

In his comments for almost an hour, the Pope tried to explain his approach to effective diplomacy ("half a step back, one step forward") and strategic communications ("the most important thing is that the message is transmitted") and He even offered his geopolitical badysis, explaining that someone had told him that the area of ​​Myanmar where the Rohingyas lived was "rich in precious stones" and that perhaps foreign interests wanted to empty it for mining. "But I do not know if it's true," he said.

He called the meeting with the Rohingya in Dhaka, Bangladesh, a "condition of the trip" and spoke about the emotions he experienced visiting 16 survivors of the persecution, to whom he swore: "We will not close our hearts or look away. The presence of God today is also called Rohingya. "

On board the plane, the Pope showed a defensive streak on his avoidance of using the politically contentious word during his days in Myanmar.

"If I had said that word in the official speeches, it would have been a door that had crashed in my face," he said, using a metaphor he used several times, and which, he said, evoked the image of how an angry teenager relieves himself.

"It is true that I did not have the pleasure of publicly hitting the door with a complaint," said the Pope. "But I had the satisfaction of dialogue and the other side dialogue, and in this way the message came"

He argued that his caution gave him access to private meetings, where he could be more outspoken.

From his meeting with Major General Min Aung Hlaing, who led a campaign of mbad murder, rape and arson against the Rohingya, the Pope said that "I did not negotiate with the truth" during the conversation and that he understood to the general. that the horrors of the past were no longer viable.

The general had asked to meet with Pope Francis before the pontiff saw the de facto leader of Myanmar, Daw Aung San Suu Kyi, Nobel peace laureate whose reputation has suffered for his failure to condemn the killings by force. (The Pope suggested that she would be a bit lazy, saying: "In Myanmar, it is difficult to evaluate a criticism without asking" Is it possible to have done this? ")

When a journalist asked the Pope, if he was worried that he had been used as a political pawn by the general to show the country who was the boss, the Pope said: "The intention of that I do not know, but I was interested in the dialogue". He pressed if he had used the word "Rohingya" in the private meeting, he replied that once he made sure the general understood his message, "I dared to say everything I wanted to say."

All that diplomatic work, the Pope suggested, was done to encourage Myanmar, a country "at the turning point", to move towards democracy. And he also suggested that his silence on the Rohingya was worthwhile with the culminating meeting of the trip with the refugees in Dhaka on Friday.

He noted that the TG1, an Italian news program, dedicated a long segment to the meeting. "Today you saw the front pages of the newspapers, they have all received the message, and I have not heard any criticism, maybe there is, but I have not heard it."

The old charm of Francisco, he seemed to be saying, he was back in action.

At different times of the trip, humanitarian activists had asked where their special touch was. had gone. They expressed their disappointment that Pope Francis, admired for speaking for the oppressed, had been silent for fear of endangering his own flock in Myanmar. Some badysts questioned how it affected their moral authority. The locals doubted their influence.

Last Monday, when the Pope arrived in Yangon, Myanmar, and met General Min Aung Hlaing, a woman, Hla Yin Win, 31, walked with her husband and baby through the venerated pagoda complex daughter. He stopped in front of a wooden sanctuary with gold-painted pillars dedicated by Buddhist worshipers from Rakhine State, where the Rohingya have been persecuted.

Mrs. Win said he liked the general "because military power is important to our country," who appreciated soldiers "doing their duty" and considered the Rohingya, who had been in the country for generations, "illegal immigrants who They do not speak Burmese and they are bad for our country. "

When asked if she thought the Pope could make a difference in the crisis, she shook her head.

"It does not matter," he said. [19659020] On the plane, the Pope remembered why it mattered. He revived in detail the meeting with the Rohingya refugees at a full interfaith meeting in the garden of the residence of the archbishop of Dhaka.

He explained that at the end of the event, the 16 men, women and children took the stage, but that the organizers "immediately wanted to take them out of the scene." Then I got angry.

He met with them individually and added that he could not let them go without saying a word.

"At that moment, I began to feel things inside, I was crying, but I tried to hide it, they also cried," he said. "So I asked for the microphone," and that's when the Pope finally said, "Rohingya."