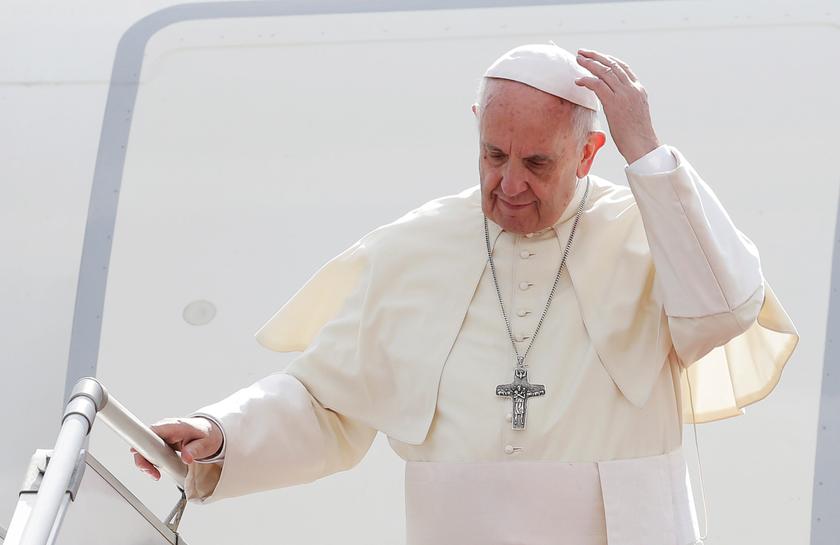 YANGON (Reuters) – Pope Francis landed in Rangoon on Monday, the beginning of a delicate visit by the leader of the Catholic Church to the Buddhist majority in Myanmar, which the United States accused of carrying out "ethnic cleansing" against his Muslim people Rohingya.

The Pope will also visit Bangladesh, where more than 620,000 Rohingyas fled to escape what Amnesty International called "crimes of humanity. "

The Myanmar army has denied accusations of murder, rape, torture and forced displacement.

After leaving Rome, the Pope told reporters on his plane: "They say it's too hot (in Myanmar), I'm sorry, but hopefully it will be fruitful at least."

Ethnic minorities dressed in traditional costumes welcomed Francis to the airport in Yangon, and the children gave him flowers when he got off his plane.

He waved through an open window to dozens of children waving flags and T-shirts of the Vatican and Myanmar with the motto of the trip – "love and peace" – while driving in a light blue Toyota for the Cathedral of Santa Maria En the heart of the city.

Only about 700,000 of the 51 million inhabitants of Myanmar are Catholics. Thousands of them traveled by train and bus to Yangon, and joined crowds at various points along the way from the airport to catch a glimpse of the Pope.

"We come here to see the Holy Father, it happens once in hundreds of years," said Win Min Set, a community leader who brought a group of 1,800 Catholics from the southern and western states of the country.

"He is very knowledgeable when it comes to political affairs, he will handle the matter intelligently," he said, referring to the sensitivity of the Pope's discussions on the Rohingya.

A large number of riot police were mobilized in the main city of the country, but there were no signs of protest.

The trip is so delicate that some papal councilors have warned him not to even say the word "Rohingya", to avoid a diplomatic incident that could turn the army and government of the country of majority Buddhism into minority Christians.

The Rohingya exodus from Rakhine State to the southern tip of Bangladesh began at the end of August, when Rohingya militants attacked the security posts and the Myanmar army launched a counter-offensive.

The Myanmar government has denied most of the accusations against him, and the army says that its own investigation found no evidence of evil on the part of the troops.

Myanmar does not recognize the Rohingya as citizens or members of a distinct ethnic group with their own identity, and even rejects the term "Rohingya" and its use.

Many people in Myanmar refer to members of the Muslim minority in Rakhine State as illegal immigrants from Bangladesh.

Francis is expected to meet with a group of Rohingya refugees in Dhaka, capital of Bangladesh, in the second stage of his trip.

The most tense moments of his visit to Myanmar are probably private meetings with the army chief, General Min Aung Hlaing and, separately, the civilian leader Aung San Suu Kyi.

More than 150,000 people have registered for a Mbad that Francisco will say in Yangon on Wednesday, according to the spokesman of the Catholic Church of Myanmar, Mariano Soe Naing.

Vatican sources say that some in the Holy See believe that the trip was decided too hastily after full diplomatic relations were established in May during a visit by Suu Kyi.

Suu Kyi's reputation as a winner of the Nobel Peace Prize has been marred because she has expressed doubts about reports of rights abuses against the Rohingyas and has not condemned the military.

"I have a great admiration for the Pope and his abilities, but someone should have convinced him not to make this trip," said Father Thomas Reese, senior author and American badyst at Religion News Service.

The Pope already used the word Rohingya in two Vatican appeals this year.

When asked if he would say it in Myanmar, Vatican spokesman Greg Burke said Francisco was taking seriously the advice he had been given, but added: "We will discover it together during the trip … it is not a forbidden word. " .

A hard-line Buddhist monk group formerly known as Ma Ba Tha said he welcomed the Pope's visit, but warned, without giving further details, of "an answer" if he spoke openly about the Rohingya.

"I hope he does not touch sensitive issues that the people of Myanmar could not accept," said Tawparka, a spokesman for the influential group, which has only one name. "There is no problem if he talks about Islam, but it is unacceptable if he talks about Rohingya and extreme terrorists"