The phase 5B vaccination group schedule moved to Thursday; A ‘tap’ turn is expected on Friday 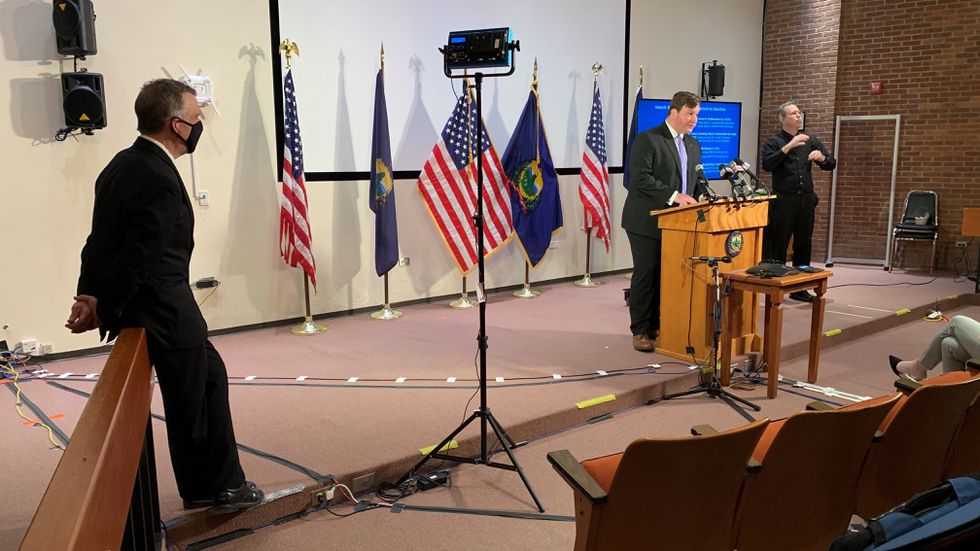 MONTPELIER, Vt. (WCAX) – Vermont Governor Phil Scott announced Tuesday that the state will move to the next vaccination group, over 18 years with underlying conditions, on Thursday, four days earlier than expected. It also hinted at a relaxation of social gathering restrictions and restaurant capacity on Friday.

So far, more than 100,000 Vermont residents have received at least one vaccine. That rapid pace, combined with lower-than-expected turnout for phase 5A, those 55 and older with underlying conditions, led to Tuesday’s decision to expand enrollment. “The high acceptance rate is something we should strive for, so let’s keep checking in when it’s your turn,” he said.

Starting Thursday, Vermonters 16 and older with underlying health problems can sign up for their vaccination. AHS Secretary Mike Smith says fewer than 10,000 people signed up for group 5A as of Monday, although it is not yet clear why. “A lot of these people are working, so that may be some of the problems. So we want to make sure we give it a little more time, ”he said.

At some point, the state wants to put in place a system where people can choose which COVID-19 vaccine to receive, but the governor says that can’t happen without more supply from the federal government.

Health Commissioner Dr. Mark Levine says the state continues to work to reach Black, Native American and people of color in Vermont who are most likely to contract COVID-19. Although they represent six percent of the population, they are 18% of COVID cases. Levine says that people in multigenerational households who meet the vaccine requirement will be able to bring other people into their home who are not part of the state’s traditional vaccination schedule. The state is already doing this with the English learner community. Levine says the state wants to build trust with these communities and reduce doubts about vaccines.

“Our goal of achieving community immunity and protecting all Vermont residents can only be achieved if we can lower barriers and make vaccination equitably accessible to all groups of Vermont residents,” said Levine.

The governor says he wants to return to the state’s age-band approach in the coming days. Your team will post a detailed vaccination schedule outlining when everyone can get the vaccine in the next few weeks.

TURN OF HINGE EXPECTED FOR FRIDAY

Governor Scott said the continuation of vaccines combined with a decrease in the number of positive cases means it will provide new guidance and a faucet opening on Friday. “We are in the last quarter of this very difficult game,” Scott said. He said the arrival of spring weather and an expected improvement in the number of cases justifies the change. He asked Vermonters to “be vigilant.”

DESPITE THE GROWTH OF CASES, THE DATA POINTS OUT THE REASON FOR THE OPTIMISM

Vermont officials said they remain highly optimistic about the state’s COVD-19 outlook despite an increase in cases largely attributed to the Newport prison outbreak.

Despite a jump in cases from around 700 last week to 900 this week, the majority of cases within a month, the Scott administration says lifting some restrictions is warranted in the coming days.

They say infections per 100,000 residents are down 27% for Vermont residents under 70 and 70% for those 70 and older. Hospitalizations are also declining, signs that authorities say point to the success of vaccines.

Vermont cases are expected to decline through April. Deaths are also expected to decline significantly this month thanks to fewer outbreaks in long-term care facilities, fewer cases among the elderly, and fewer people in the ICU. “Collectively looking at this data, it is probably the most optimistic I have been since the beginning of the pandemic,” said DFR Commissioner Mike Pieciak.

Cases have also dropped nationally and regionally, which will help Vermont as well. Still, Gov. Scott says Vermonters can’t let their guard down either, and that March is a key month in the fight against the virus.

As of Tuesday, Vermont health officials reported 87 new coronavirus cases for a total of 16,286. There have been a total of 211 deaths. The state’s seven-day positive percentage average is 1.8%. A total of 337,733 people have been tested and 13,594 recovered.