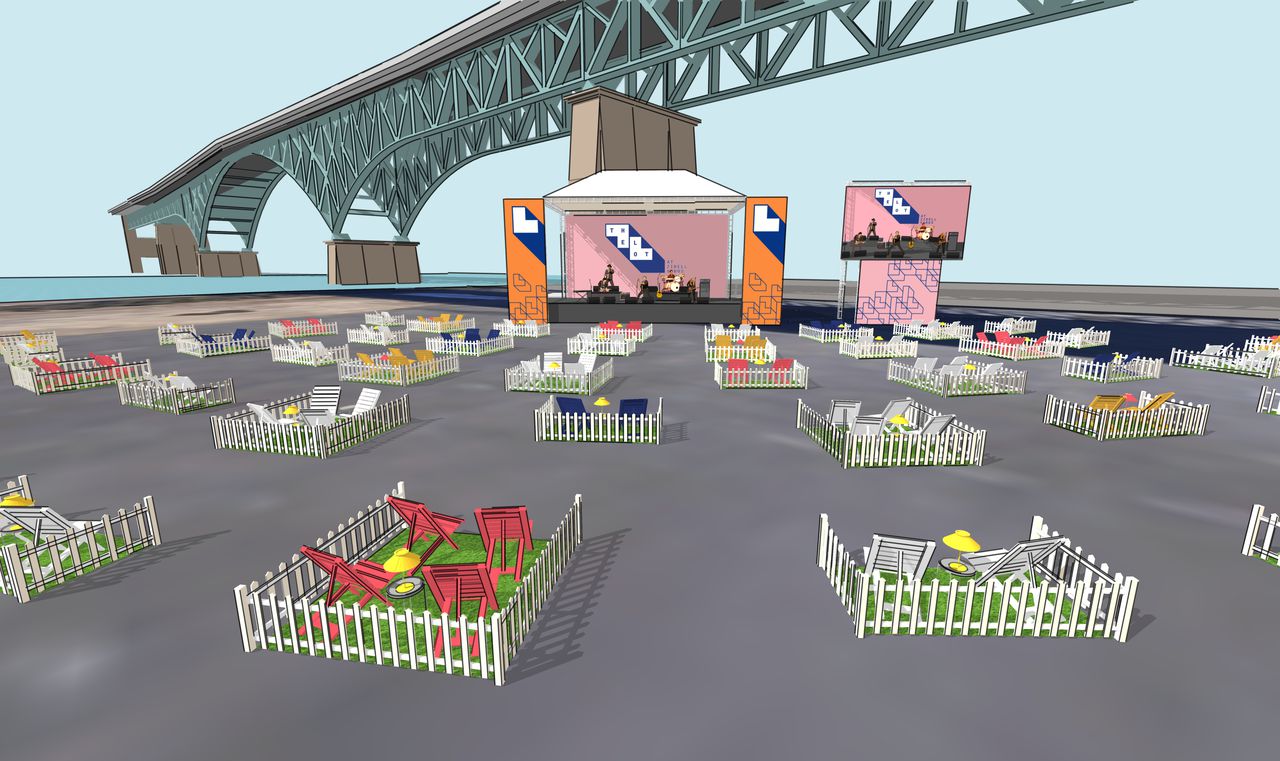 As an uncertain summer approaches for big festivals around Oregon, a new venue in downtown Portland is stepping in to host some of the city’s most popular events.

The Lot at Zidell Yards, a new socially-distanced event venue on Portland’s South Shore, will host the Waterfront Blues Festival, Portland Pride and other events this spring and summer, it announced Tuesday.

With social gathering restrictions still in place, the venue said it could initially house up to 270 people, isolated in socially distanced seating groups. Attendees will be able to phase in and out to avoid crowds, and will be asked to wear face masks outside of their capsules.

Renderings of the site show groups of two to four lawn chairs gathered in small patches of green grass, each area enclosed on three sides by a white picket fence. All capsules face a stage installed under the Ross Island Bridge.

“We are excited to bring live events and entertainment back to Portland and we also recognize the responsibility that comes with it,” the venue said on its website.

And while continuing to present a detailed list of precautions, from contactless ticket scanning to regularly sanitized restrooms, The Lot finally acknowledges the fact that “there is an inherent risk of exposure to COVID-19 in any public place where people are present. “

The Waterfront Blues Festival, which runs from July 2-5, promises 2021 attendees the “same amazing vibe” despite the new location, which is just a short distance from the Willamette River from the festival site. traditional in Waterfront Park.

Each day of the festival will include two separately ticketed shows, and the event will also be broadcast live for those unable to attend in person, organizers said.

People who purchased passes for the 2020 event will not be able to hand them in for the 2021 festival, organizers said, but will receive a refund and first access to tickets this summer. The blues festival has yet to announce the 2021 schedule, which is expected to arrive in May, and has not said whether fireworks will be part of this year’s event.

Portland Pride will take place in June, according to The Lot, but organizers have not yet announced any details for the event.

The venue will also host a film and music series presented by the Hollywood Theater in May and June, as well as a music festival in August that promises to highlight a diverse ensemble of local and regional musicians.

“We believe that our city’s musicians, artists, cultural and creative institutions not only form the rich and colorful fabric of Portland, but are also essential components to the economic health of our city,” Christina Fuller, co-owner of Fuller Events, said in a press release. “The Lot will provide opportunities for our artists and our hospitality and event production professionals to get back to work, and will provide our audience with an opportunity to celebrate and reconnect.”

It will not be the first time that Zidell Yards has been used for a music festival. In 2014, the former shipyard hosted Project Pabst, a lively PBR sponsored festival spearheaded by Modest Mouse and Tears for Fears. It has also hosted the Feast food festival and the Cavalia traveling horse show.

The 33-acre site, located between Tilikum Crossing and Ross Island Bridge, was once slated for high-rise development, but more recently was in talks to build a 10,000-seat amphitheater in association with event promoter Live Nation.

That’s a far cry from the small crowds that will initially be allowed this summer. While the venue will be capped at 270 initially, The Lot said it hoped to expand capacity this summer, assuming pandemic restrictions are relaxed as more Oregonians get vaccinated.