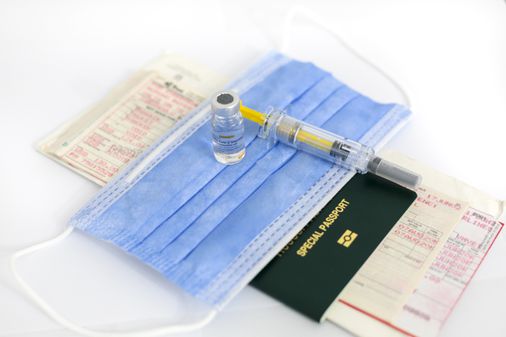 “The key questions are: Will [the vaccine] will it be available, and will it be accepted as part of the new normal of traveling around the world? “said Mark Cameron, an immunologist at Case Western Reserve University in Cleveland. it is a step that people would be willing to take ”.

Last fall, shortly after news that the trials of the Pfizer and Moderna vaccines were successful, Qantas announced that vaccines would eventually be required for travel. Alan Joyce, chief executive of the Australian airline, said the move would be “a necessity” when vaccines are widely available.

“I think it will be a common thing to talk to my colleagues from other airlines around the world,” he told Australia’s Nine Network last November. The interview immediately made international news. “We will ask people to get vaccinated before they can get on the plane. . . for international visitors coming and people leaving the country, we think it’s a must. “

South Korea’s largest airline is taking a similar, if slightly more conservative, stance on vaccines. Jill Chung, a spokeswoman for Korean Air, said there is a real possibility that airlines require passengers to be vaccinated. But he said that is because governments are likely to require vaccines as a condition of lifting quarantine requirements for newcomers.

US-based carriers have not been as forthcoming with their policies, with many experts believing that proof of vaccination is unlikely to be required for travel within the United States for residents. Earlier this month, executives from several US airlines spoke out strongly against the CDC requiring coronavirus testing to board domestic flights. Since then, the CDC dropped the idea.

Even the idea of ​​requiring the vaccination of airline employees has generated mixed reactions. United Airlines Chief Executive Officer Scott Kirby asked other airlines to join him in demanding that airline employees receive the COVID-19 vaccine, but both Delta Air Lines and Alaska Airlines said that while they will encourage employees to be vaccinated, they will not demand it. However, those employees may not have a choice if they are working on international flights to countries that require a vaccine.

Dr. Anthony Fauci has weighed in on the vaccine passport idea and told Newsweek that he thinks it is “quite possible.”

“Everything will be on the table for discussion,” Fauci said.

The concept of requiring vaccines to visit specific countries is not new. Several African countries require visitors to be vaccinated against yellow fever. Once vaccinated, they are given what is commonly known as a yellow card, which allows entry.

Unfortunately, the COVID-19 vaccine test will not be as simple as a card. Currently, four major players claim to have the answer to the puzzle and hope that their digital health passports will become the international standard. IBM, Clear, the International Air Transport Association and the Commons Project Foundation are in various stages of testing or implementing their digital passports. While all apps will have multiple functions, the common denominator is to allow licensed laboratories and testing centers to securely share test and vaccine information, allowing travelers to show proof of vaccination.

“This is something we were working on before COVID came along,” said Perry Flint, IATA spokesperson. The organization’s Travel Pass app launched this week. “The genesis goes back to trying to modernize the processes. You go to an airport when you travel internationally and you take out your passport three, four, five times. What if you could take that paper passport and basically save it on your mobile device, your iPhone or your Android, whatever? And it would just show that one time and it would be linked to you biometrically and basically all systems would recognize it. “

Since the beginning of the pandemic, health has come to the fore in the IATA app, with a focus on allowing it to link with a licensed laboratory to share a passenger’s negative COVID-19 test or vaccination record. Emirates has announced that it will use the IATA Travel Pass app.

The global airline industry, facing losses of $ 157 billion over the next year due to the historic collapse in demand, sees a digital health pass to certify that passengers do not have COVID as the key to resuming international travel.

So far the most popular option among airlines is CommonPass, currently offered on flights selected by United Airlines, Lufthansa, Virgin Atlantic, Swiss International Air Lines and JetBlue. It uses a digital certificate downloaded to a mobile phone to show that a passenger tested negative for COVID-19. Users can offer the certificate as proof of a negative test if the country requires it.

But not everyone is convinced that a standardized electronic vaccine passport is so easy to get in such a short time.

“In some countries where medicine has been nationalized, you can easily track tests and vaccinations,” said Ida Bergstrom, a Washington DC-based physician who specializes in immunization, vaccination and travel medicine. But for the United States, that is not the case. What will sync with the airlines or what will sync with these governments, and how will it play out? I can see a disaster in the making. They have been talking about COVID passports since day one and I’m not sure if it’s practical. “

There are other issues at stake. A vaccination passport would restrict people from economically disadvantaged countries who do not have access to a vaccine. Making the process completely digital could also be difficult for travelers who don’t use mobile devices.

“It will take a significant amount of time to vaccinate the world’s population, particularly those in less advanced countries, or in different age groups, therefore we should not discriminate against those who wish to travel but have not been vaccinated,” he said. Gloria Guevara. President and CEO of the World Travel and Tourism Council.

Health officials also continue to emphasize that even if a person has been vaccinated, it does not mean they are safe from spreading the virus.

“We don’t know what kind of immunity the vaccine actually confers,” Bergstrom said. “Since I was vaccinated, it is very unlikely that I have a serious illness, but my lifestyle has not changed much because my husband and children are not vaccinated yet. So if I had to go, let’s say Cancun, I can come back with COVID. Although I wouldn’t necessarily take a great risk, I could give it to my family and then something could happen to them. “

Whether or not airlines and cruise ships require a COVID passport may not matter if countries start requiring it. Both Australia and New Zealand have been quick to block and stop international arrivals when coronavirus cases arise. It’s not hard to imagine those countries requiring a COVID passport. Israel is issuing its vaccinated residents “green passports,” allowing them to sponsor gyms, hotels and sporting events. It will also allow them to travel internationally when the country resumes flights. It seems a given that inbound travelers will face the same rules.

Despite all the uncertainty surrounding health passports, a beleaguered travel industry is pinning its hopes on the vaccine and hopes that, along with an ongoing multi-layered approach to mask wearing and social distancing, it can help it recover. . Expect to see more cruise lines, an industry that was crushed by the pandemic, that requires passengers to be vaccinated in order to navigate.

After a year of very limited travel, John Lovell, President of Travel Leaders Group, is saying the words that few of us who dream of exploring the world want to hear again.

“I see that many airlines, cruise lines and even hotels require vaccinations at the end of the fourth quarter of this year. . . and beyond.”