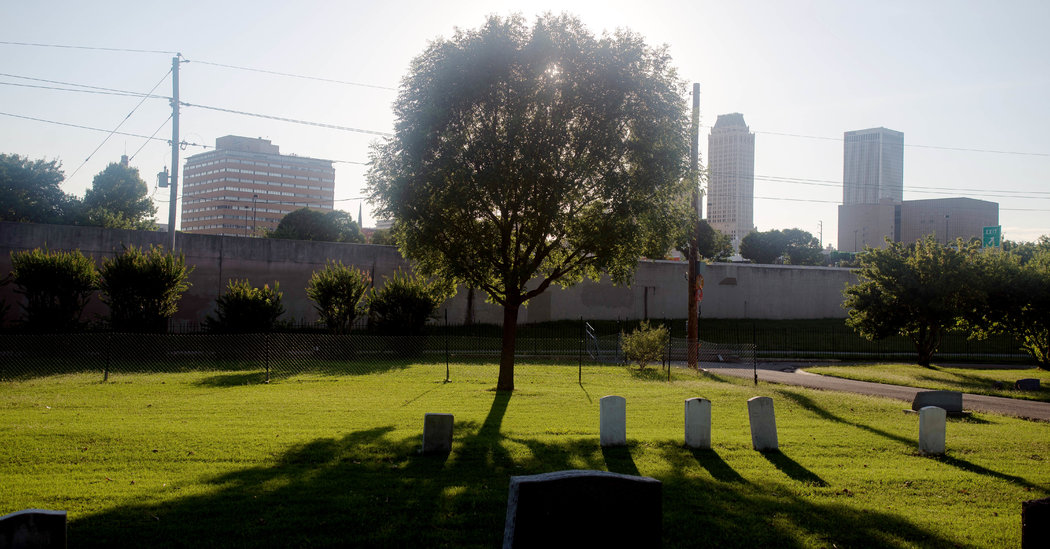 TULSA, Okla. – Incited by a salacious and largely fabricated news story about a young black man who assaulted a white girl, a group of lynchers appeared in the Tulsa city jail, where he was being held. A group of African-Americans, many of them soldiers who had returned from fighting in World War I, rushed to help protect the young man. The fighting broke out, then fired.

The episode sparked a racist uproar. White rioters descended on the city’s Greenwood district, a black community considered so rich that Booker T. Washington, the author and speaker, had called it “Black Wall Street.” They were soon aided by a local National Guard unit with a water-cooled Browning machine gun. According to eyewitness accounts from 1921, the planes circled overhead, shot people as they fled, and dropped incendiary devices.

While the young man from prison was able to leave the city and then was exonerated, all the black people were burned to the ground. City officials, law enforcement, and guards gathered thousands of surviving residents and forced them to remain in a hastily organized internment camp as the bodies of up to 300 people were dumped in unmarked graves.

The massacre was hidden for decades. Educators did not teach it. Government offices did not register him. Even archival copies of some newspaper accounts were selectively removed.

However, on Monday, forensic investigators began the possible site of a mass grave in Oaklawn Cemetery, a few blocks from where much of the carnage occurred.

“A curtain of silence was made to keep this quiet,” said Scott Ellsworth, a Tulsa historian who wrote a story of the massacre, “Death in a Promised Land: The Mutiny of the Tulsa Race of 1921.” The excavation defies official silence, he said, which was an attempt to hide the crime.

“This is an important step,” said Ellsworth. “This is unprecedented.”

On Monday morning, the forensic team assembled by the city and state began removing soil from an 8-by-4-foot test excavation in an effort that was expected to last about a week. The site is within what the ground penetrating radar suggests could be a much larger well. The researchers are focusing on what is described as an “anomaly” in the soil, which could mean that the land there was disturbed. The site is located in the unmarked section of the cemetery.

Excavation is just an initial step, with more steps planned depending on what is found.

“We don’t know what we’ll find,” said Lesley Rankin-Hill, an emeritus professor of anthropology at the University of Oklahoma. Rankin-Hill, who is part of the investigation team, said the anomaly could be human remains, or it could be a rubble box, the instruments used to scan the area could not distinguish.

“We have an analysis showing that there was a major disturbance on the land where we were told that people were buried,” he said.

One of those cited is a Salvation Army commander, OT Johnson, who said he oversaw diggers who buried 150 bodies in Oaklawn. Similarly, the wife of a black funeral home, Eunice Cloman Jackson, related in the report that her stepfather was part of a crew of 55 gravediggers burying bodies in Oaklawn. The report also records the story of a boy, Clyde Eddy, who saw large wooden boxes containing several burned bodies alongside workers digging a ditch in the cemetery.

“While Mr. Eddy did not directly see the victims located in this trench-like area, it is reasonable to assume that his purpose was a mass grave,” the report says.

They also suggest that the Oaklawn site is the few known victim records, which listed 39 deaths: 13 whites and 26 blacks. Of the black victims, 21 were buried in Oaklawn, according to the report.

If the test site discovers human remains, the diggers hope to stop their work. Exhumation is unlikely to occur at this stage, Rankin-Hill said. Even during the test excavation, the site is closed to public view, although the excavation will be videotaped.

“There is a lot of protocol,” Rankin-Hill said. “Technically it is a crime scene that they are entering.”

When he announced the investigation, Mayor GT Bynum of Tulsa also called the company an investigation into the crime and asked that the process be “transparent.” Part of the transparency is a supervisory commission.

Chief Egunwale Amusan, president of the African Ancestral Society in Tulsa, was one of many Tulsans who pushed for the inclusion of the oversight committee. He is one of the few community leaders who will be able to visit the excavation site. He said the city faced a conflict of interest because, although the massacre occurred almost a century ago, the city government was part of the crime.

“He is looking for a crime and that means there is a criminal,” said Amusan. “That investigation may yield something. You start to find out who was involved.

Also on the oversight committee is the Rev. Dr. Robert RA Turner, pastor of the Vernon African Methodist Episcopal Church in Greenwood, a church that was destroyed in the fires and rebuilt soon after. Mr. Turner visited the site on Sunday, the day before the excavation, and prayed for victims who may be buried there.