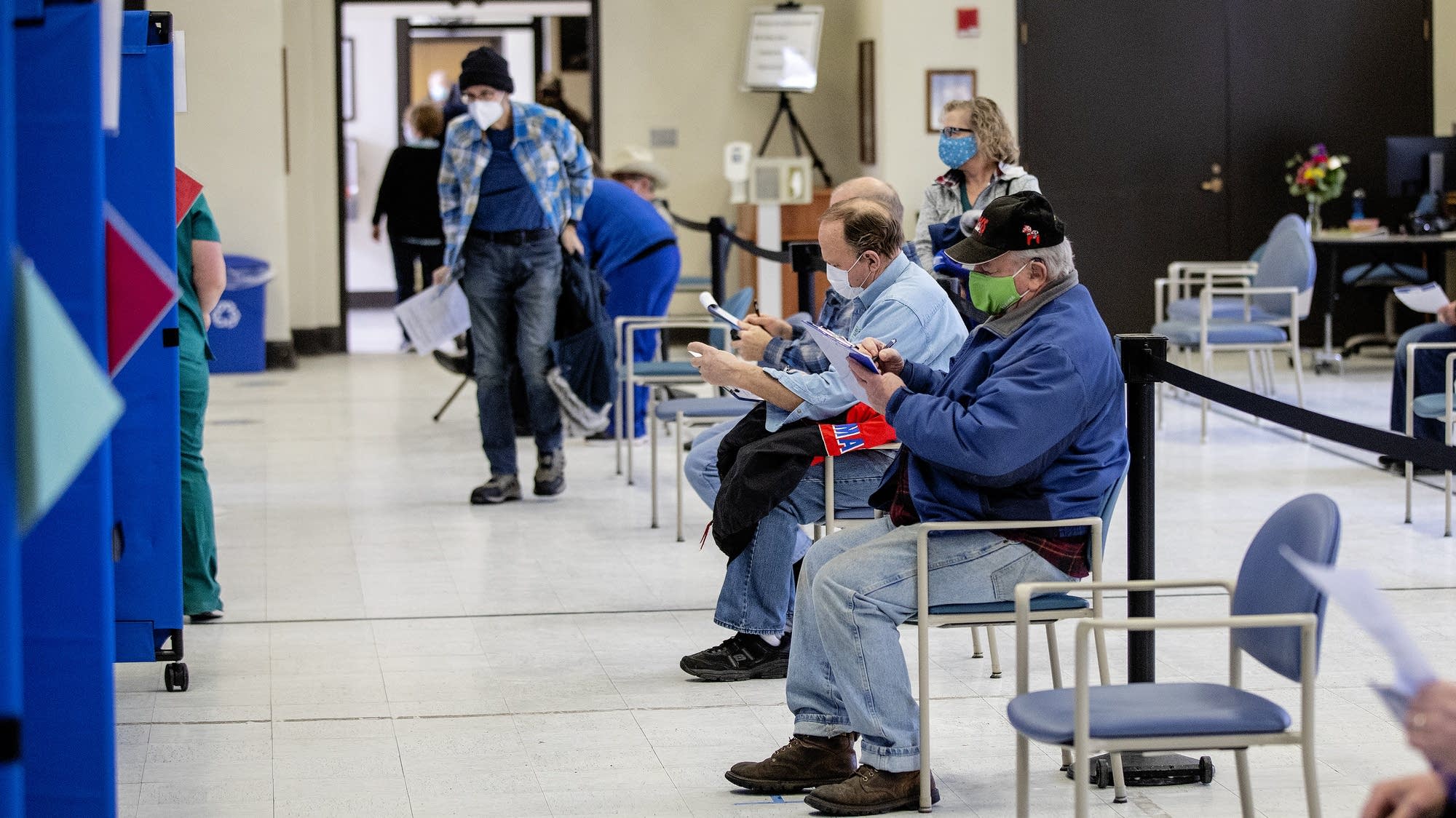 3 things you should know:

The vaccination traction may finally be here.

Officials had expected the arrival of shipments delayed by the recent cold snap nationwide, in addition to the state’s regular dose allocation, to start showing up in daily vaccine counts. That seems to be happening.

The Health Department reported 12,000 new vaccines in Minnesota on Tuesday, significantly higher than the previous Tuesday.

Tuesdays are usually low-reporting days; the trend line is heading in the right direction. The seven-day moving average is nearly 37,000 a day, the highest since vaccines began in late December.

About 16.3 percent of Minnesotans 16 and older – more than 900,000 people – had received at least one dose as of Tuesday’s update, and about 8.5 percent were fully vaccinated.

Fifty-three percent of Minnesotans 65 and older have received at least one injection today, according to estimates by the Department of Health. That’s important as Gov. Tim Walz has said the state will expand eligibility for vaccination when 70 percent of that population receives a first dose.

Importantly, the state has added type 1 diabetes as one of the high-risk conditions that are prioritized for the vaccine. (Last week, it was only type 2.)

Long-term care facilities were once the epicenter of the disease, but cases have plummeted to levels not seen since the beginning of the pandemic, said Lindsey Krueger, director of the state health facilities complaint office.

Ninety-six percent of the facilities allow visitors now, he told reporters on Tuesday. The shortage of healthcare workers at the facility had also been a major concern from the beginning, but the state’s emergency operations center currently has no requests for staffing assistance, he added.

Minnesota is currently ranked 16th among states in doses administered per 100,000 people, according to data compiled by the federal Centers for Disease Control and Prevention.

“We see Johnson & Johnson as a game changer that will help us quickly bring immunity to more Minnesotans,” Kris Ehresmann, the state’s director of infectious diseases, told reporters Tuesday.

Even more encouraging, the Biden administration said Tuesday night that it now expects to have enough vaccine doses for all adult Americans by the end of May, two months ahead of schedule.

Walz has promised that all Minnesotans should be able to get the COVID-19 vaccine by the summer.

While the pace of vaccines is picking up, Minnesota’s COVID-19 numbers show that the state is fairly stable in a good way.

Hospitalization rates remain encouraging at levels last seen before the surge in cases in late fall. On Tuesday, the Health Department reported that 243 people in Minnesota hospitals had COVID-19, 57 of whom were in need of intensive care, staying at relatively low levels.

Known active cases reached just under 7,000, continuing a trend that remained fairly stable until February and has remained drastically since late November and early December, when active cases were around 50,000.

Four recently reported deaths brought Minnesota’s death toll to 6,490. Among those who died, about 63 percent had been living in long-term care or assisted living facilities; most had underlying health problems.

The state has recorded a total of 485,655 confirmed or probable cases so far in the pandemic, including 443 reported Tuesday. About 97 percent of Minnesotans known to be infected with COVID-19 during the pandemic have recovered to the point where they no longer need to be isolated.

Officials continue to implore Minnesotans to wear masks in indoor public gathering spaces, socially distance themselves and be vigilant against the spread of the disease. They remain concerned about COVID-19 strains with the potential to spread. Minnesota has 112 confirmed cases of the so-called UK variant and two cases of the Brazil variant.

People in their 20s still make up the age group with the highest number of confirmed cases in the state – more than 91,000 since the pandemic began, including more than 48,000 between the ages of 20 to 24.

The number of high school-age youth confirmed with the disease has also risen, with more than 38,000 total cases between the ages of 15 to 19 since the pandemic began.

As children increasingly return to school buildings and sports, Minnesota public health officials are urging Minnesota families with children to get tested for COVID-19 every two weeks now until the end of the school year.

Although young people are less likely to feel the worst effects of the disease and end up hospitalized, experts fear that young people are unknowingly transmitting it to older relatives and members of other vulnerable populations.

People can have the coronavirus and transmit COVID-19 when they do not have symptoms.

Regionally, most of Minnesota is down significantly from the peak in late November and early December, as well as a minor rebound in January.

Case burden continues to be higher among people of color

In Minnesota and across the country, COVID-19 has disproportionately affected communities of color in both cases and deaths. That has been especially true for Minnesotans of Hispanic descent through much of the pandemic.

Although the new case count continues well below the peaks of late November and early December, data shows that Latinos continue to suffer a severe blow.

Mistrust of the government, along with deep-seated health and economic disparities, have hampered efforts to push testing among communities of color, officials say, especially among unauthorized immigrants who fear their personal information may be used. to deport them.

Distrust of communities of color “is what has plagued us for some time,” Walz said last week at a briefing on promoting vaccines for people of color.

Health Commissioner Jan Malcolm said it has been a “real problem” not having data disaggregated by race and ethnicity, but that the state may have data to share soon.

Hospital officials in Duluth, Minnesota, say people are forgoing necessary health screenings and other medical care, presumably due to lingering fears of COVID-19.

Officials at Essentia Health and St. Luke’s in Duluth are urging patients not to postpone necessary medical care until the pandemic is over. They say they have seen a drop in the number of people going for cancer screenings, such as mammograms and colonoscopies.

“Please seek care if you need it so your health does not deteriorate. Get the follow-up care you need for conditions like diabetes and hypertension. Get preventive care like colonoscopies and mammograms,” Pryor urged patients.

Emergency room doctors in the area also say patients are sicker than they used to be, suggesting they are waiting longer to seek care.

“My heart breaks when I see patients who waited too long to see us and as a result have worse outcomes than they would have otherwise,” said Essentia physician Andy Boehland. , but it’s still happening today. “

Doctors say they have also noticed a significant drop in vaccination rates for children against diseases like measles.

In Cook County, volunteers help vaccinate a grateful public: Cook County, at the tip of Minnesota’s North Shore, has the highest vaccination rate in the state. Almost everyone in the county who is 65 or older has received their first COVID-19 vaccine. Several factors have contributed to Cook County’s success, including a small army of volunteers who have played a critical role in vaccinating the county.

Some MN school districts will bring back older students later than Walz wanted: Minnesota’s three largest districts have announced plans for middle and high school students to return to in-person learning. But many students won’t transition to new schedules in person until after spring break.

Are you vaccinated? Here’s what you need to know about post-vaccination risks: As the COVID-19 vaccination rate increases, many people wonder if it is safe to see their families or if they should continue to wear masks. Two experts shared their tools for understanding the science and assessing risks.