The future of Infosys you can choose between three flavors – tech2.org

The future of Infosys you can choose between three flavors

Incoming President of Infosys Ltd., Salil Parekh, faces three options: he can create a more valuable company, return money to shareholders or kick the can to a new group of owners.

Unlike his predecessor, who got into a messy skirmish with the still immovable cofounders of the firm, Parekh will have some freedom to choose his strategy. On the one hand, he has the right experience, after spending 25 years at Ernst & Young LLP, then at Capgemini SE, where he oversaw the integration of IGate Corp.

IGate's 100,000 people in India gave the French consultancy the low profile. the capacity for cost execution needed to venture beyond Europe. North America is now Capgemini's largest market, where Parekh leads the fight against International Business Machines Corp., Hewlett Packard Enterprise Co. and Accenture Plc, as well as against Indian players. That gives the 53-year-old interpreter the intimate knowledge of the traditional offshoring industry and the existential threat he faces from the so-called SMAC: social, mobile, badytical and cloud computing.

At the same time, being a stranger, Parekh puts on the founder of the founders against the board that culminated with the abrupt departure of Vishal Sikka, the first non-local executive of the company. The senior talent that had followed Sikka from SAP SE has mostly gone, giving Parekh a clean slate to guide his five-year term.

So, what should you focus on? If you decide to be a wealth creator, a one-word answer is: margin. 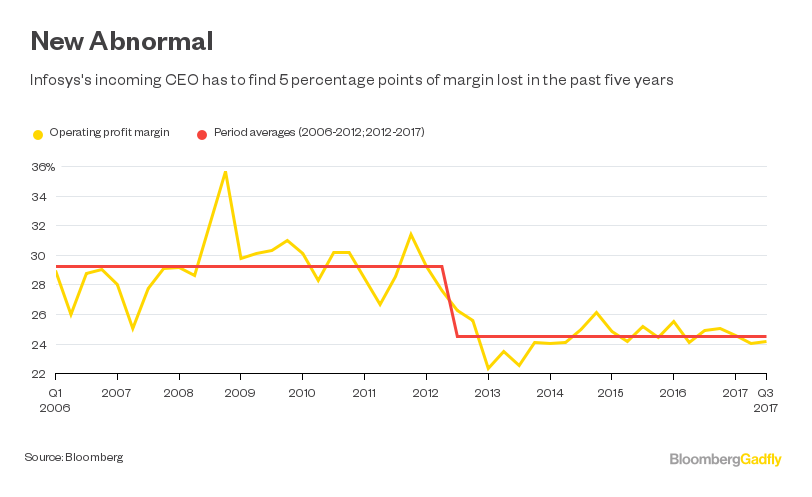 You can recover the five percentage point decrease in Infosys operating margin in the last five years, but it will take some work.

Some time ago, the people of Elara Securities estimated that up to 75% of the revenues of the outsourcing company could be more profitable with automation. The maintenance and support workflow to provide global corporations with large-scale enterprise software from SAP or Oracle Corp. requires a lot of manpower. Take people out of the equation and replace it with artificial intelligence. Similarly, when administering customers' IT infrastructure, use machine learning to dismantle help and support desktops. Pbad some of the savings to customers, save the rest.

Such margin increase is easier to achieve on paper than in practice. Infosys would need to use part of its $ 5.4 billion treasury to acquire companies with specialized skills. The results would show up over time, but first the loss of jobs would come. Given the unencouraging employment situation in India, there could be political ramifications. Those would overcome the pressure of using fewer guest worker visas in the US. UU And hire more Americans.

Providing shareholders with instant gratification is the safest option. They can now expect to receive 70 percent of the free cash flows, compared to 30 percent of net profits before the 2014 fiscal year. If Infosys can not grow back faster than Accenture, Parekh can simply preside over a soft decrease. Alternatively, the new CEO could work with the co-founders, who hold 13 percent of the shares, and prepare Infosys for a sale. Private capital could be the most likely suitor. 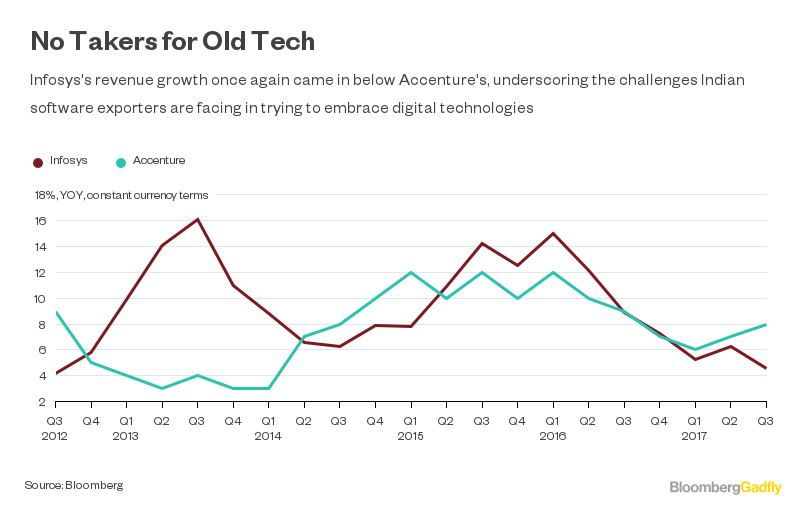 For now, the Indian media see a good omen in Parekh's decision to endure the bad traffic in Bangalore. Sikka's choice of a base in Palo Alto, when most of the company's 200,000 employees are located in India, did not make him want N.R. Narayana Murthy, one of the multi-million-dollar co-founders of Infosys. Murthy's campaign against Sikka led to a modernization of the junta, with Nandan Nilekani, another of the co-founders, returning as president.

Allegations of a commission of bribery and silence in the acquisition of $ 200 million of 2015 from Panaya Ltd., an Israeli automation specialist in technology, were investigated by a law firm. But with Sikka gone, and even the new board declined to make public the findings of that investigation, Murthy's fight for more disclosure of Infosys is over.

That's a headache less for the incoming CEO, but the saga of the board has a clear message for him: Parekh can have Infosys with the flavor he wants, as long as the co-founders like it too.

This column does not necessarily reflect the opinion of Bloomberg LP and its owners.