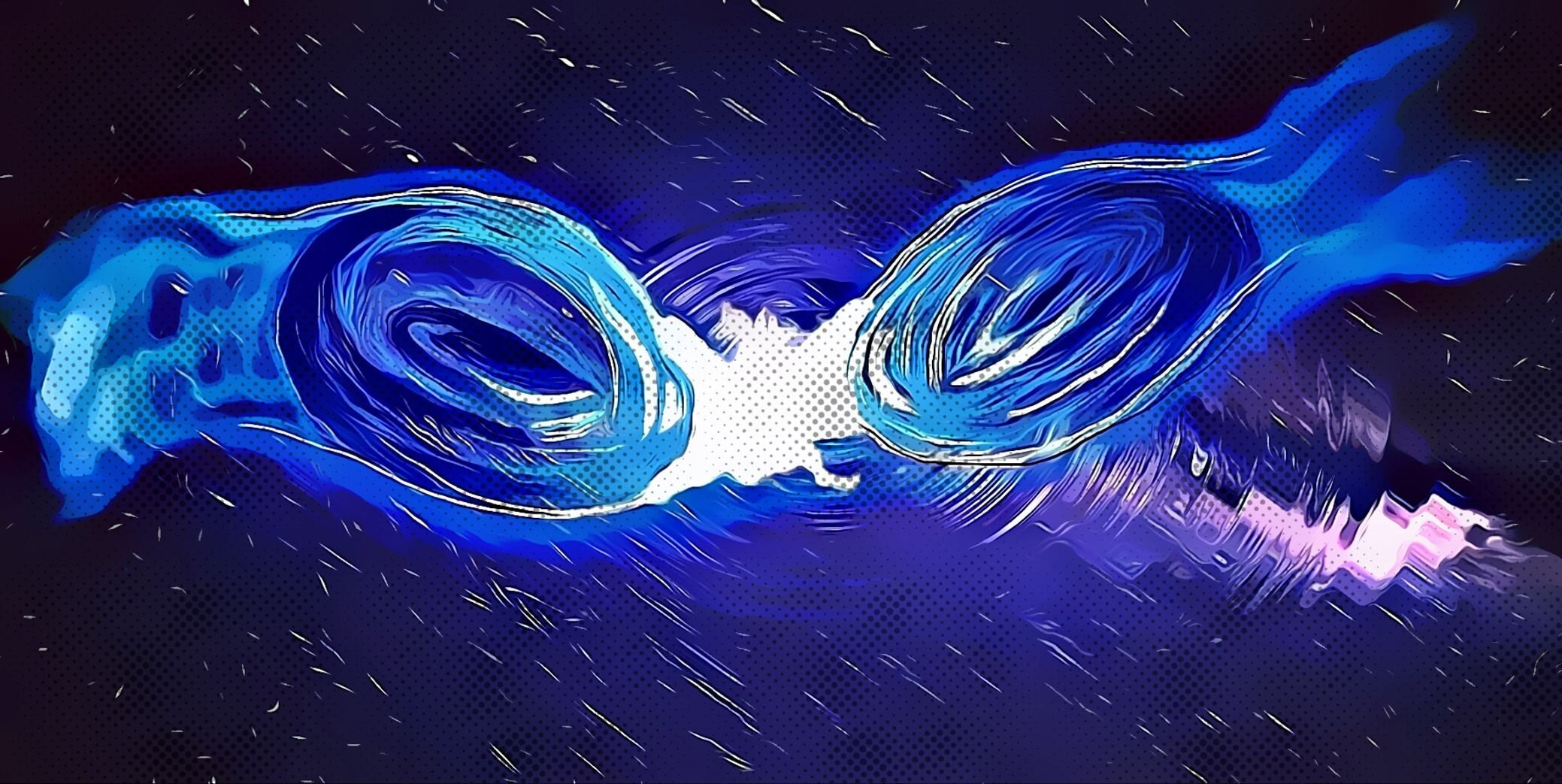 An international team of scientists led by the Galician Institute of High Energy Physics (IGFAE) and the University of Aveiro shows that the most intense black hole collision ever observed, produced by the gravitational wave GW190521, could actually be something even more mysterious : the fusion of two boson stars. This would be the first evidence for the existence of these hypothetical objects, which are candidates for dark matter, which are believed to comprise 27% of the mass of the universe.

Gravitational waves are waves in the fabric of space-time that travel at the speed of light. These originate from the most violent events in the universe, carrying information about their sources. Since 2015, the two LIGO detectors in the US and the Virgo detector in Cascina, Italy, have detected and interpreted gravitational waves. To date, these detectors have already observed around 50 gravitational wave signals. All of these originated from the collisions and mergers of black holes and neutron stars, allowing physicists to deepen their understanding of these objects.

However, the promise of gravitational waves goes much further, as they should eventually provide us with evidence of previously unobserved and even unexpected objects, and shed light on current mysteries like the nature of dark matter. However, the latter may have already happened.

In September 2020, the LIGO and Virgo (LVC) collaboration announced the gravitational wave signal GW190521 to the world. According to their analysis, the signal was consistent with the collision of two heavy black holes, 85 and 66 times the mass of the sun, which produced a final black hole with 142 solar masses. The resulting black hole was the first of a previously unobserved new family of black holes: intermediate-mass black holes. This discovery is of utmost importance, as these black holes were the missing link between two well-known families of black holes: stellar-mass black holes that form from collapsing stars, and supermassive black holes that reside at the center of nearly every galaxy, including the Milky Way.

In addition, this observation was a huge challenge. If what we think we know about how stars live and die is correct, the heaviest of colliding black holes (85 solar masses) could not form from the collapse of a star at the end of its life, which opens a fan of doubts. and possibilities about its origins.

In an article published today in Physical Review Letters, a team of scientists led by Dr. Juan Calderón Bustillo at the Galician Institute of High Energy Physics (IGFAE), a mixed center of the University of Santiago de Compostela and Xunta de Galicia, and Dr. Nicolás Sanchis-Gual, researcher postdoctoral fellow at the University of Aveiro and the Instituto Superior Técnico (Univ. Lisboa), together with collaborators from the University of Valencia, Monash University and the Chinese University of Hong Kong, has proposed an alternative explanation for the origin of the GW190521 signal: the collision of two exotic objects known as boson stars, which are one of the most likely candidates to explain dark matter. In their analysis, the team was able to estimate the mass of a new constituent particle of these stars, an ultralight boson with a mass billions of times smaller than electrons.

The team compared the GW190521 signal with computer simulations of boson and star mergers, and found that these actually explain the data slightly better than the analysis by LIGO and Virgo. The result implies that the font would have different properties than those indicated above. Dr. Calderón Bustillo says: “First, we would no longer be talking about colliding black holes, which eliminates the problem of dealing with a ‘forbidden’ black hole. Second, because boson star mergers are a lot weaker, we infer a much closer distance than that estimated by LIGO and Virgo. This leads to a much greater mass for the final black hole, of about 250 solar masses, so the fact that we have witnessed the formation of a hole intermediate mass black is still true. ”

Dr. Nicolás Sanchis-Gual says: “Boson stars are objects almost as compact as black holes but, unlike black holes, they do not have a ‘no-return’ surface. When they collide, they form a boson star that can become unstable, eventually collapsing into a black hole and producing a signal consistent with what LIGO and Virgo observed. Unlike regular stars, which are made of what we commonly know as matter, boson stars are made up of what we know as ultralight bosons. These bosons are one of the most attractive candidates to constitute what we know as dark matter. ”

The team found that while the analysis tends to favor the black hole merger hypothesis, the data prefer a boson star merger, albeit in an inconclusive way. Professor José A. Font from the University of Valencia says: “Our results show that the two scenarios are almost indistinguishable given the data, although the exotic boson star hypothesis is slightly preferred. This is very exciting, as our model of boson star is, as of now, very limited and subject to major improvements. A more evolved model may lead to even greater evidence for this scenario and would also allow us to study previous observations of gravitational waves under the assumption of boson-fusion. star “.

This result would not only involve the first observation of the stars with bosons, but also that of their building block, a new particle known as an ultralight boson. Professor Carlos Herdeiro from the University of Aveiro says: “One of the most fascinating results is that we can actually measure the mass of this putative new dark matter particle, and that a value of zero is ruled out with high confidence. With analysis From this and other gravitational wave observations, our result would provide the first observational evidence of a long-sought dark matter candidate. ”

Researchers reveal the origin of the merger of black holes

In charge of the Galician Institute of High Energy Physics