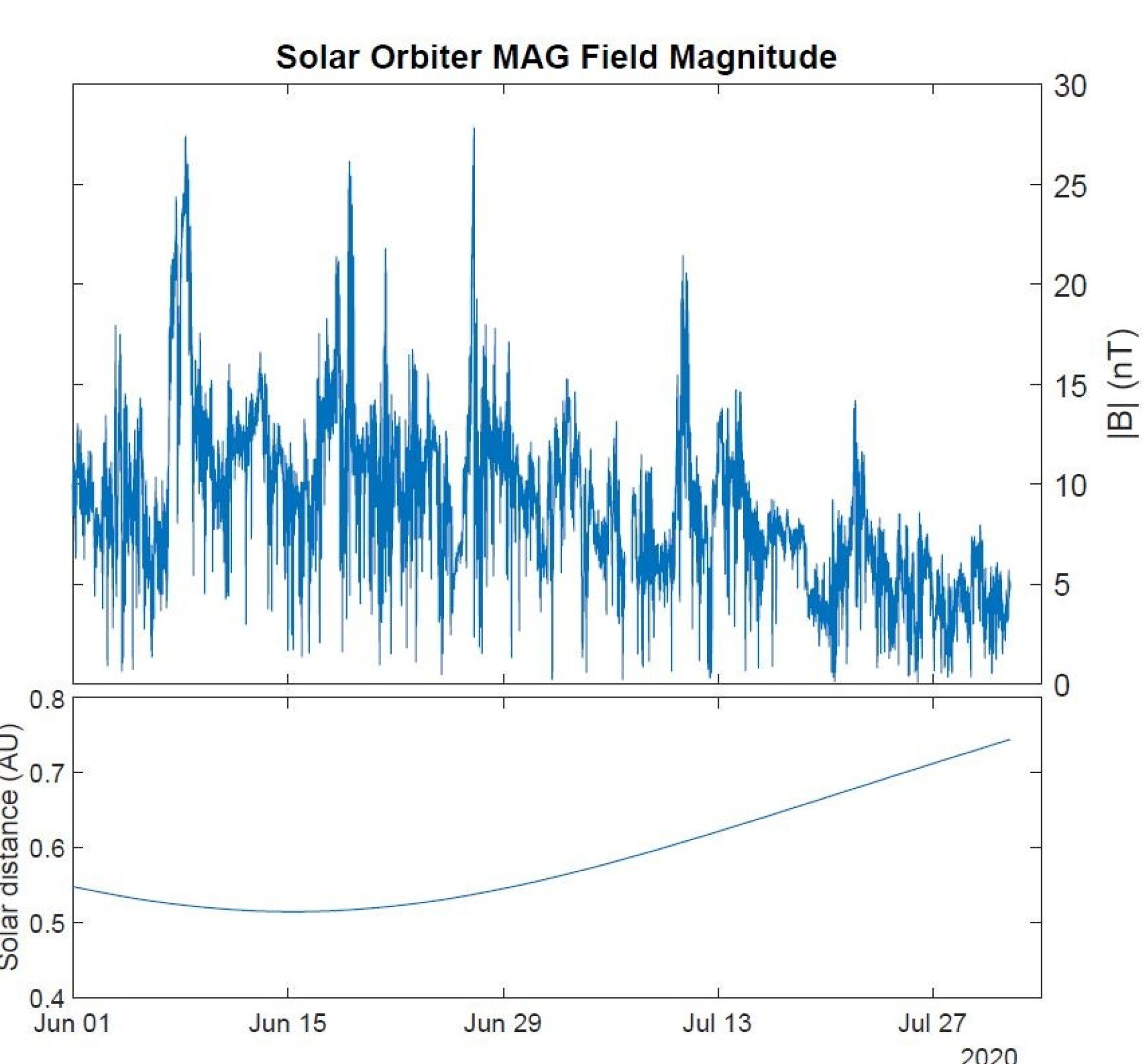 Three instruments of the Solar Orbiter spacecraft, including Imperial’s magnetometer, have released their first data.

The European Space Agency’s Solar Orbiter Spacecraft was launched in February 2020 to study the sun, and it began collecting science data in June. Now, three of its ten devices have released their first installment of data, revealing the sun’s position in its ‘cool’ phase.

The sun is known to follow an 11-year cycle of sunspot activity and is currently almost completely free. This is expected to change in the coming years as sunspot activity increases rapidly, which makes the sun more active and increases the likelihood of adverse ‘space weather’ events, where the sun contains massive amounts of material in solar flares and coronal masses And releases energy ejections.

The Sun’s activity is closely linked to the position of its magnetic field, and is measured by the instrument of the Imperial mounted on a solar orbiter, a magnetometer (MAG). Since June, MAG has recorded hundreds of ‘vectors’ – a measure of the direction and strength of the Sun’s magnetic field.

The solar orbiter has already drifted within Venus’s orbit, collecting data closest to the sun so far, and will be progressively closer in the coming years. It is currently orbiting close to the Sun’s equator, which will show a very distorted magnetic field in times of high activity.

Currently, however, the Sun’s magnetic ‘equator’ is very flat to the true equator, allowing the spacecraft to observe fields from the northern magnetic hemisphere for weeks on end, when a few degrees north of the equator. At high solar activity, when the Sun’s magnetic equator is more distorted, it is not possible to see a single polarity of the magnetic field for so long.

The solar wind close to the Sun shows much higher structure, and is further shown by MAG confirming the presence of ‘switchback’ – dramatic folds in the solar wind first recorded by Parker Solar Probe, a NASA mission 2018 Was started in .

The Solar Orbiter and the Parker Solar Probe will work together at different distances and orbit around the sun to compare data on the same event in the coming years as it rises and enters the next phase of its sunspot cycle is.

A testament to hard work

The data released today is part of Solar Orbiter’s commitment to release data within three months of it, a tight schedule for any space mission, but particularly challenging during an epidemic. . Professor Tim Horribery, Principal Investigator of MAG from the Department of Physics at Imperial, says the data is ready in time, testament to the hard work of the engineering team at Imperial.

“He has worked incredibly hard over the last few months. It’s a huge job,” he said. But its payment is off. “A lot of it is something we’re releasing that nobody has really seen in great detail yet. So I’m sure there will be a whole extra set of miracles as well – we just don’t know what they are yet. Doing. One is huge. The amount of people to do, and I really hope people dive into it. ”

One of the team’s first challenges was to eliminate small magnetic field signatures from the spacecraft. Almost everything that moves on electric power on a spacecraft creates a different magnetic field that must be removed from the data to receive the real signal from the Sun. It includes solar panels, thrusters, other science equipment and over 50 different heaters.

While different parts of the spacecraft turned on, the team had to take data from all of them to eliminate their signal. But Professor Horbury says it was worth it: “This is just the beginning, but the data is already quite exciting and very rich.

“The solar orbiter is living up to its promise. We always knew this was going to be a fantastic mission and early measurements are showing how much potential the sun has for unprecedented insights.”

MAG Instrument Manager Helen O. Bryan said: “MAG has been performing brilliantly for seven months now. We tested it on Earth before launch, but we can’t completely recreate the harsh space environment, and certainly MAGs are no longer experienced for a long time.

“So the first data go is amazing for the public, and it’s just the beginning. In December, the spacecraft makes a flyby of Venus, and then we’re back to half of the Sun-Earth distance in February next year. ” Very proud!”