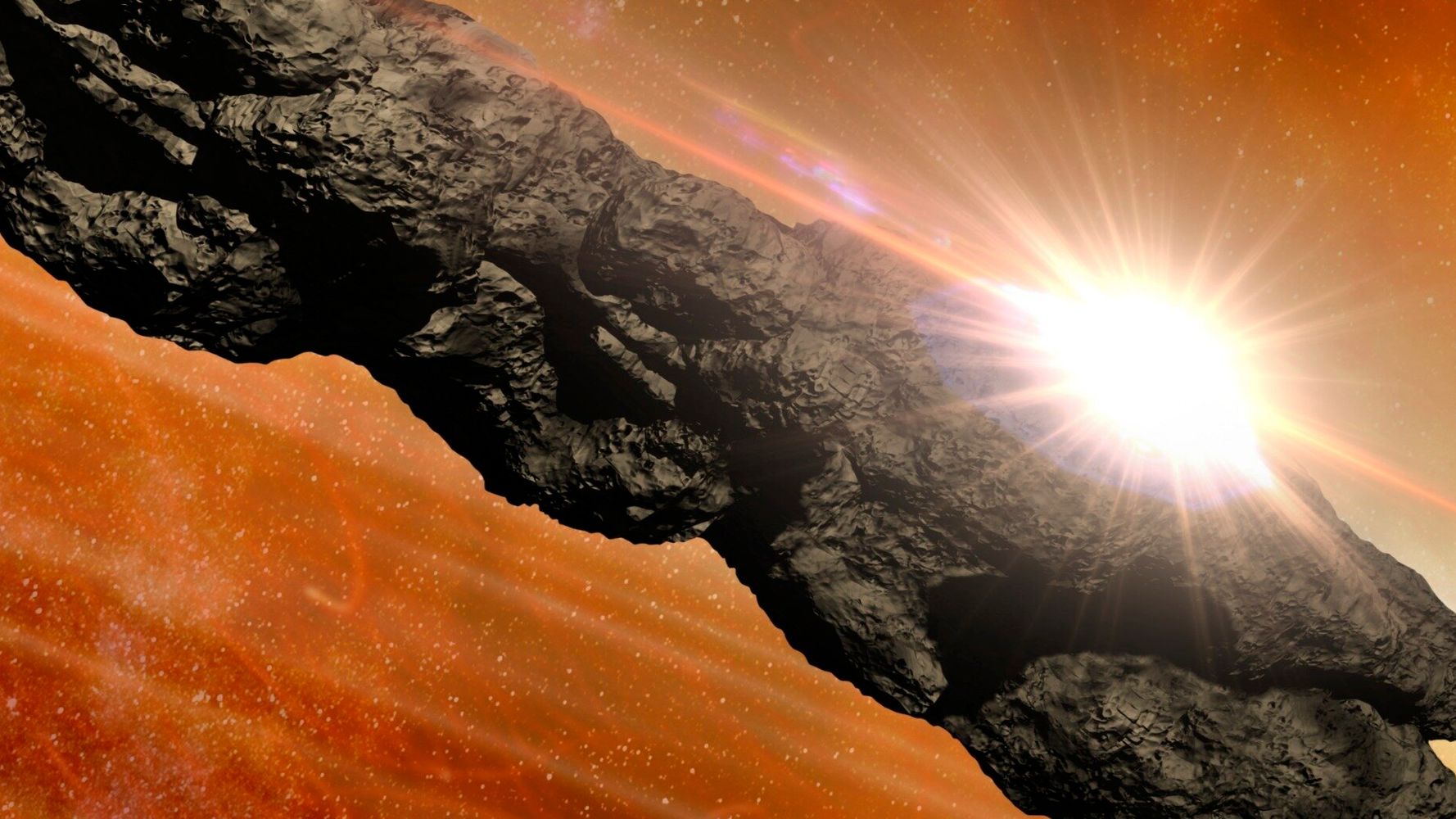 CAPE CANAVERAL, Florida (AP) – The first known interstellar visitor to our solar system is neither a comet nor an asteroid as was first suspected, and it looks nothing like a cigar.

A new study says the mysterious object is likely a remnant of a Pluto-like world and is shaped like a cookie.

Astronomers at Arizona State University reported this week that the strange 148-foot (45-meter) object appears to be made of frozen nitrogen, as does the surface of Pluto and Neptune’s largest moon Triton.

Study authors Alan Jackson and Steven Desch believe that an impact tore down a chunk of a nitrogen-covered icy planet 500 million years ago and sent the chunk tumbling out of its own star system, toward ours.

The reddish remnant is believed to be a sliver of its original self, its outer layers evaporated by cosmic radiation and, more recently, by the sun. It’s called Oumuamua, Hawaiian for Explorer, after the observatory in Hawaii that discovered it in 2017.

Visible only as a point of light millions of miles away at its closest focus, it was determined to have originated beyond our solar system because its speed and trajectory suggested it was not orbiting the sun or anything else.

The only other object that has been confirmed to have deviated from another star system to ours is Comet 21 / Borisov, discovered in 2019.

But what is Oumuamua? It didn’t fit into familiar categories: it looked like an asteroid but accelerated like a comet. However, unlike a comet, it did not have a visible tail. Speculation varied between the comet and the asteroid, and it was even suggested that it could be an extraterrestrial artifact.

Using its brightness, size, and shape, and that it was powered by escaping substances that did not produce a visible tail, Jackson and Desch devised computer models that helped them determine that Oumuamua was likely an eroding chunk of nitrogen ice. Gradually, in the same way a bar of soap thins with use.

His two papers were published Tuesday by the American Geophysical Union and also presented at the Lunar and Planetary Sciences Conference, which is usually held in Houston but virtual this year.

Not all scientists buy the new explanation. Avi Loeb of Harvard University questions the findings and defends his premise that the object appears to be more artificial than natural; in other words, something from an alien civilization, maybe a dinghy. His recently published book “Alien: The First Sign of Intelligent Life Beyond Earth” addresses the issue.

Given that Oumuamua is different from comets and asteroids, and something that has not been seen before, “we cannot take on ‘business as usual,’ as many scientists contend,” Loeb wrote in an email Wednesday. “If we contemplate ‘something we have not seen before’, we must leave the hypothesis of artificial origin on the table and collect more evidence about objects of the same class.”

When Oumuamua was at its closest approach to Earth, it appeared to be six times its width. Those are the rough proportions of a wafer to an Oreo cookie, Desch noted.

Now it’s gone, beyond the orbit of Uranus, more than 2 billion miles (3.2 billion kilometers) away, and it’s too small to be seen, even by the Hubble Space Telescope. As a result, astronomers will have to trust the original observations and hopefully continue to refine their analyzes, Jackson said.

By the time the object begins to exit our solar system around 2040, the width-to-thickness ratio will have dropped to 10 to 1, according to Desch.

“So maybe Oumuamua was consistent with a cookie when we saw it, but it will soon be literally as flat as a pancake,” Desch said in an email.

This is how the cosmic cookie crumbles, this one anyway.