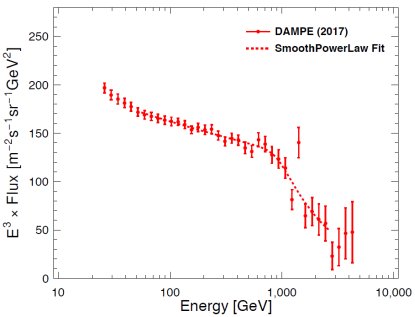 The Dark Matter Particle Explorer mission (DAMPE, also known as Wukong) published its first scientific results on November 30 in Nature presenting the precise measurement of the electron flux of cosmic rays, especially a cut spectral in ~ 0.9 TeV. The data may shed light on the annihilation or decomposition of dark matter particles.

DAMPE is a collaboration of more than one hundred scientists, technicians and students in nine institutes in China, Switzerland and Italy, under the direction of the Purple Mountain Observatory (PMO) of the Chinese Academy of Sciences (CAS). The DAMPE mission is funded by CAS's priority strategic science and technology projects in space science.

DAMPE, China's first astronomical satellite, was launched from China's Jiuquan Satellite Launch Center into solar synchronous orbit on December 17, 2015. At an altitude of approximately 500 km, DAMPE has been collecting data from one week after its launch.

In its first 530 days of scientific operation until June 8 of this year, DAMPE has detected 1.5 million electrons of cosmic rays and positrons above 25 GeV. The electron and positron data are characterized by an unprecedented high energy resolution and low particle background contamination.

DAMPE has directly detected a spectral cut at ~ 0.9 TeV, with the spectral index changing from ~ 3.1 to ~ 3.9. The precise measurement of the electron and positron spectrum of cosmic rays, in particular the flow decline at TeV energies, considerably reduces the parameter space of models such as nearby pulsars, supernova remnants and / or candidates for dark matter particles that were proposed explain the "positron anomaly" previously revealed by PAMELA and AMS-02, according to FAN Yizhong, deputy chief designer of the scientific application system of DAMPE.

"Along with the data from the cosmic microwave background experiments, high-energy gamma-ray measurements and other astronomical telescopes, the DAMPE data can finally help clarify the connection between the positron anomaly and the annihilation or decomposition of particles of dark matter, "said FAN.

The data also hint at the presence of a spectral structure between 1 and 2 TeV energies – a possible result of nearby sources of cosmic rays or exotic physical processes. However, more data is definitely needed to explore this phenomenon.

DAMPE has recorded more than 3.5 billion events of cosmic rays, with maximum energies of events greater than ~ 100 trillion electrons (TeV). DAMPE is expected to record more than 10 billion cosmic ray events over its lifetime (it is projected to exceed five years given the current state of its instruments.)

More statistics will allow a more accurate measurement of the electron and positron spectrum of cosmic rays up to ~ 10 TeV. Scientists will also be able to explore the spectral characteristics potentially generated by the annihilation / decomposition of dark matter particles or nearby astrophysical sources, for example, pulsars.

Figure 2 compares the results of the electron and positron cosmic ray spectra of DAMPE and other experiments. The DAMPE results reported here demonstrate the unique ability of DAMPE to explore possible new physics and / or new astrophysics in the TeV energy window, thanks to its high energy resolution, great instrumental acceptance, broad energy coverage, excellent electron separation power / protons and long working life.

The first scientific result of DAMPE is a milestone for international collaboration. The mission will continue to study galactic cosmic rays of up to ~ 10 TeV for electrons / gamma rays and hundreds of TeV for nuclei, respectively. It is expected that the DAMPE data will reveal new phenomena of the universe in the TeV window.

More information:
Direct detection of a break in the electron and positron cosmic ray spectrum of teraelectronvolts, Nature (2017). nature.com/articles/doi:10.1038/nature24475