The creepy ‘spiders on Mars’ finally explained after two decades 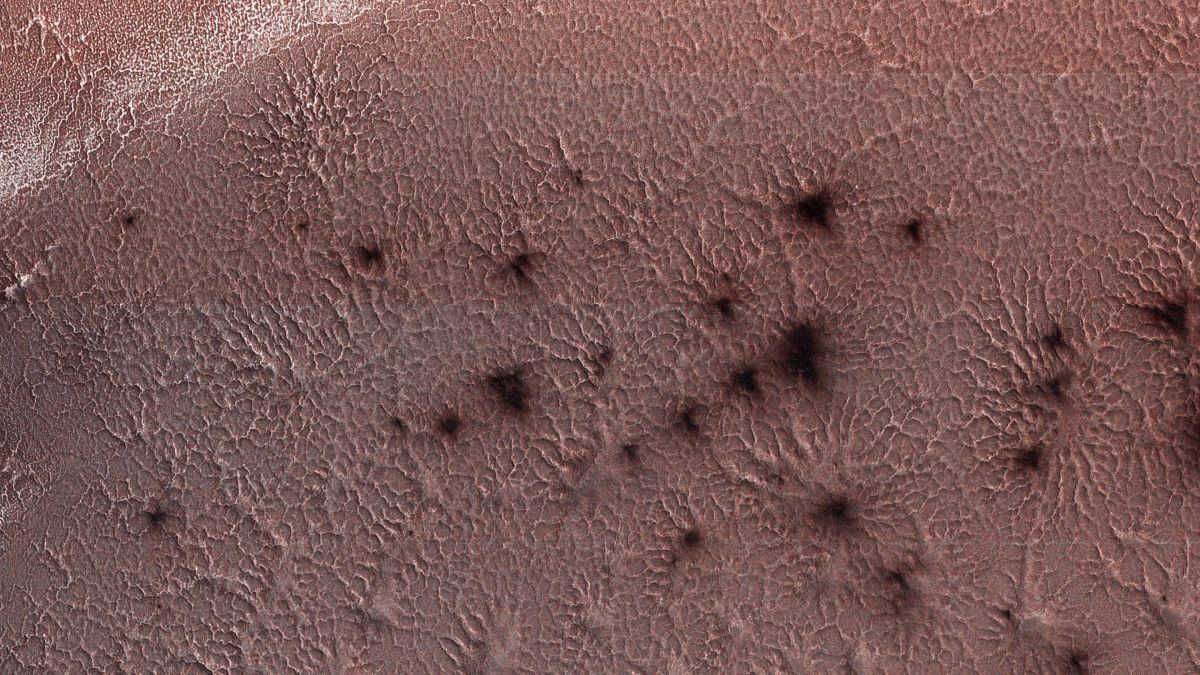 Ziggy played the guitar, and UK scientists played with a large chunk of dry ice to try to figure out what’s behind the strange alien patterns known as “spiders on mars. “

Those patterns, visible in satellite images of the South Pole of the Red Planet, are not real spiders, of course; But the black, branching shapes carved into the Martian surface look creepy enough that researchers named them “araneiformes” (meaning “spider-shaped”) after discovering the shapes more than two decades ago.

Measuring up to 3300 feet (1 kilometer) wide, the gigantic shapes look like nothing in land. But in a new study published March 19 in the journal Scientific reports, the scientists successfully recreated a scaled-down version of the spiders in their lab, using a slab of carbon dioxide ice (also called dry ice) and a machine that simulates the Martian atmosphere. When cold ice made contact with a much warmer bed of Mars-like sediment, some of the ice instantly transformed from a solid to a gas (a process called sublimation), forming spider-like cracks where escaping gas passed through the ice.

“This research presents the first set of empirical evidence for a surface process believed to modify the polar landscape in Mars, “the study’s lead author, Lauren McKeown, a planetary scientist at the Open University in England, said in a statement. “The experiments directly show that the spider patterns we observe on Mars from orbit can be carved out by the direct conversion of dry ice from a solid to a gas.”

The Martian atmosphere contains more than 95% carbon dioxide (CO2), according to NASAand much of the ice and frost that forms around the planet’s poles in winter is also made up of CO2. in a 2003 study, the researchers hypothesized that spiders on Mars could form in spring, when sunlight penetrates the translucent layer of CO2 ice and warms the ground below. That heating causes the ice to sublime from its base, building pressure underneath the ice until it eventually cracks. The accumulated gas escapes through cracks in a gushing column, leaving behind the zigzag patterns of spider legs visible on Mars today, the team hypothesized.

Until recently, scientists had no way to test that hypothesis on Earth, where atmospheric conditions are vastly different. But in the new study, the researchers made a small slice of Mars here on Earth, using a device called the Open University’s Mars Simulation Chamber. The team placed different-sized grains of sediment inside the chamber, then used a system that resembles a claw machine you’d see at a local gallery to suspend a block of dry ice over the grains. The team adjusted the camera to mimic atmospheric conditions on Mars, then slowly lowered the block of dry ice onto the grains.

The experiments showed that the spider sublimation hypothesis is valid. Regardless of the size of the sediment grains, dry ice always sublimated upon contact with them, and the escaping gas pushed upward, forming spider-leg cracks along the way. According to the researchers, spider legs branched more when the kernels were finer and less when the kernels were coarser.

While not definitive, these experiments provide the first physical evidence showing how spiders may have formed on Mars. Now isn’t it sublime?