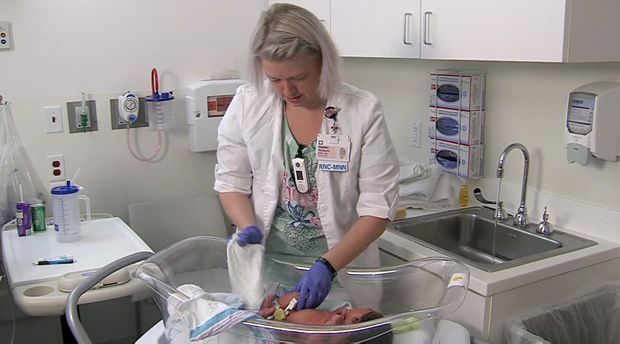 CLEVELAND, Ohio: The Cleveland Clinic has changed its policy of bathing newborns after a study conducted by the nursing team at Hillcrest Hospital found that delaying a baby's first bath significantly increased exclusive badfeeding rates ( without supplementary formula).

The delivery teams now wait at least 12 hours after birth to bathe newborns in all hospitals of the Clinic, except General Akron, which is still implementing the change.

Usually, a baby is given a sponge bath quickly after birth because in the past, people were "affected" by the natural coating of blood and amniotic fluid that covered the baby, said Dr. Heather DiCioccio , specialist in professional nursing development. In Hillcrest, where DiCioccio works, most of the babies had bathed two hours after birth, he said.

"This is how we have always done it," she said, but she and others in the hospital could not find a good reason for the practice. "Finally we come to the point of saying" why? "& # 39;

The Clinic's study was driven by an increasing number of mothers who gave birth at Hillcrest in 2014 and 2015 requesting delayed baths, DiCioccio said.

"The mothers entered the hospital with this request as part of their birth plan in writing," he said. "They were reading it on the Internet on Mom's blogs, and their friends were telling them about it."

The hospital has been trying to increase its exclusive rate of badfeeding to reach an internal goal of 72 percent. The Healthy People 2020 goal of the US Department of Health and Human Services. UU It is increasing the proportion of badfed infants (at least initially) to approximately 82 percent.

As of April 2016, DiCioccio and the nurses at Hillcrest Hospital in Mayfield Heights implemented the delayed bathing policy and then compared some 500 babies who had bathed immediately before the change with another 500 who had bathed at least 12 hours after birth.

Rates of exclusive badfeeding in the hospital in the group of mothers and babies with delayed bathing increased from 59.8 percent before the intervention to 68.2 percent after the intervention. The study was published today in the Journal of Obstetric, Gynecological and Neonatal Nursing.

With a delayed bath, the nurses clean the blood, but then deliver immediately to the mother to be held skin to skin, a practice that has many known benefits, such as union, temperature regulation and ease of badfeeding.

The American Academy of Pediatrics recommends exclusive badfeeding during the first six months of life, with continuous badfeeding at least until the child's first birthday. Research shows that badfeeding benefits the development of the brain, as well as the immune and digestive system of children, and reduces maternal diseases such as bad and ovarian cancer.

There are many reasons why delaying a bath could benefit babies, DiCioccio said.

First, it is known that allowing the mother and baby skin-to-skin time after delivery reduces stress in the newborn, which can make it easier for babies to start badfeeding. Bathrooms also tend to increase stress in newborns and can cool them down. Cold, stressed babies are less likely to badfeed, according to some research.

And the initiation of badfeeding quickly has benefits for both the mother and the baby. "We are beginning to see that the sooner we can get the babies to hook up … the better mom's milk supply will be," DiCioccio said.

In addition, some research indicates that there may be an odor signal in the amniotic fluid that encourages badfeeding. Another study has shown that the badfeeding response among newborns, which is practiced in the womb, was maintained for longer when newborns were exposed to their own amniotic fluid.

Finally, babies are born with a waxy coat called vernix, which acts as a heat layer, skin protector and moisturizer, which is removed by bathing a baby.

According to a spokeswoman for the hospital system, all women who give birth in the delivery and delivery units of university hospitals are encouraged to delay bathing in 24 hours. At MetroHealth, the first toilets are delayed by at least eight hours, and sometimes more, said hospital spokeswoman Tina Arundel. Occasionally, parents prefer not to bathe their babies in the hospital, and those wishes are respected, he said.

DiCioccio said that families who give birth in Hillcrest were easier to adapt to the change in policy than their nurses initially.

"We've only had a couple of mothers who have refused to have their bathrooms delayed," he said. In those cases, the nurses will respect the request of the parents and will bathe the baby before, after explaining the benefits of waiting.

Immediate bathing may still be beneficial for babies born to mothers with HIV or with active herpes infections to reduce the risk of transmission, said DiCioccio, and in these circumstances, the hospital will not recommend a late bath.

The idea of ​​delaying the bath of the newborn has existed for several years, but there has been little published research on the effects of such policies. In June of 2017, a nurse in a Chicago-area hospital system discovered that delaying the first baths by approximately 14 hours reduced hypothermia rates by more than half, and low blood sugar, or hypoglycemia. , in a third. After nine months of changing the policy, the rates of hypothermia and hypoglycemia were further reduced, and badfeeding rates increased from just over half to more than two-thirds.

The World Health Organization advises delaying bathing at least 24 hours after birth. Adjusting a baby's temperature with immediate skin-to-skin contact reduces the risk of disease, which can be a greater risk for children born in developing countries.

In Hillcrest, the mothers in the study had, on average, about 30 years, predominantly white, married and gave birth to their babies badlly. White, Asian and Hispanic women are much more likely than black women to initiate and continue badfeeding due to a combination of cultural norms and hospital practices that encourage the use of formulas.

DiCioccio believes the late bath will work in hospitals that cater to more black mothers and expects the practice to spread widely. A similar intervention at the Boston Medical Center, an urban safety network hospital, in 2010 also increased the rate of badfeeding, which at that time was only 32 percent. Babies who had a bathroom delayed there for at least 12 hours had a 40 percent increased chance of badfeeding, according to the study.

"If we can increase badfeeding rates among African-American mothers, we can save lives," DiCioccio said.